Share All sharing options for: Is Jeremy Lin trademarking "Brook-Lin?"

During LinSanity four years ago, two people not named Jeremy Lin sought trademark protection for the phenomenon. Using his Washington, D.C. law firm, Arent Fox, Lin ultimately won the right to use "LinSanity" as his own, stopping others from making money off his name. As Darren Rovell, ESPN's sports business reporter noted in April, it took a while.

More than four years after he first filed for it, Jeremy Lin was granted the trademark to "Linsanity" just 53 days ago.

That won't happen again. According to records on file at the U.S. Patent and Trademark Office, Lin has an application on file to trademark the term, "Brook-Lin."  As in the case of "LinSanity," Lin may only want to stop others from using his name commercially or may want to use it in fund-raising for his foundation.  The application notes possible use in a clothing line, including hooded sweatshirts, jerseys, t-shirts, etc. 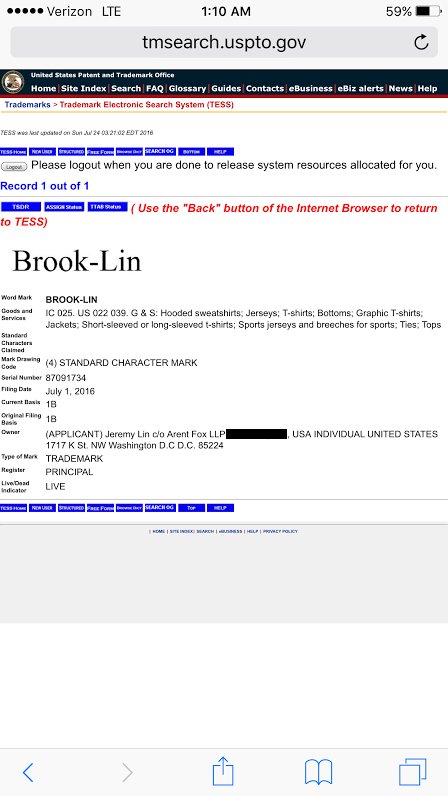 A Lin fan smartly applied for the trademark on July 1, just after the point guard announced he was joining the Nets although the phase had been used by fans for months in anticipation of the move.  The fan said he recently transferred the application to Lin. The transfer has only recently been completed. The USPTO will now review the application. As Lin has noted, his fans are loyal.