Every Sunday, we’ll be updating the Nets’ off-season with bits and pieces of information, gossip, etc. to help take the edge off missing the playoffs, relying on our own reporting and analysis as well as whatever else we can find.

Share All sharing options for: NetsDaily Off-Season Report No. 1

And we're back!  Ninth big year!  Why do I ruin so many summer days?  And this year, some spring days, too.

The departures of Tim Walsh and Gary Sussman are only the most obvious moves in the Nets front office this week.  We count 11 staffers --including all the coaches-- who won't be back. Out of respect for those let go, we're limiting what we're reporting about the (mostly) young staffers who are packing up their Nets memorabilia in Brooklyn and moving on.

Bottom line, of course, is that these are all Sean Marks calls.  He IS in charge and all that speculation about Mikhail Prokhorov and Dmitry Razumov interfering is just that speculation.  Marks has impressed the Russians and they have other things to worry about back home. So they are leaving him alone. (There is also a greater and greater realization of just how much work there is to do.)

We had long heard that Marks wants to improve the Nets "performance" staff -- that nexus of medical, training and strength/conditioning.  He wants more modern practices, better coordination and more utilization of all the equipment and devices the Nets have bought over the years, including most recently during the move from East Rutherford to Brooklyn.

Also, there is broader pattern here.  The Nets aren't just getting younger on the court. They are getting younger in the front office. Marks is 40, Trajan Langdon is 39 and LI. Nets head coach Ronald Nored is 26. The Nets have also hired another 26-year-old to be  "coordinator for long-term strategy." Andrew Baker, trained as a lawyer, came from the Spurs.  (The only 50-something hire is Alton Byrd, the 58-year-old vice president for business operations at the Long Island Nets and he was hired by the Nets business side.)

it should also be noted that some of the young front office "survivors" are being promoted. It is not a total bloodbath. Expect an announcement on those moves soon.

The other trend of course is that the Nets are picking fruit off the "Spurs Tree," a lot of it. Marks and Langdon (and Baker) all began their front office careers working for Gregg Popovich and R.C. Buford.  And with rumors mounting that Ime Udoka and Ettore Messina are among the leading candidates for head coach, it looks like more Texas license plates in the Nets parking lot.

The Nets, of course, aren't the only team that have tried to emulate the Spurs.

Not all of those coaches are still employed, but when comparing them with the Lakers Tree, aka the Phil Jackson Tree, it's still pretty good.  Brian Shaw, Kurt Rambis, Derek Fisher, Jim Cleamons, Frank Hamblen and Bill Cartwright all have losing records. Steve Kerr of course shares both Spurs and Lakers roots.

So would it be a good thing if the Nets hired Udoka in particular?  He has spent four years working alongside Popovich, including two appearances in the NBA Finals and the 2014 championship. He has great respect throughout the NBA.  He even has a vague Nets connection.  In 2011, at the end of the lockout season, he was invited to New Jersey Nets camp. After eight days he was cut, ending his NBA playing career.

The next year, he was in Spurs camp as an assistant coach, as was Marks. Langdon joined the organization that same season as a pro scout.  The three are roughly the same age, all former NBA journeymen ... although Langdon was a star at CSKA Moscow.

So, here's the issue as we see it.  On one hand, all three would be on the same page, something the Nets haven't enjoyed in a while.  Ask Jason Kidd or Lionel Hollins or P.J. Carlesimo.  On the other, would Marks, Langdon and Udoka form a closed circle?  We wrote about the dangers of the small group ethos back in January noting that too many decisions -- big decisions -- were made by King, Razumov and Frank Zanin, King's No. 2.  It did not work.

The Spurs culture, which Marks wants the Nets to emulate, is open. So there's lhat. But it's also a bit secretive. Of course, Udoka hasn't been hired yet. So we will wait and see ... as we will on so many other things.

Draft Sleeper of the Week

Don't laugh. The Nets will have picks, probably a few in the second round.  So as the off-season progresses, we'll be looking at who might be holding a Nets jersey and wearing a Nets cap on June 28, the day after the draft.

Here's our first sleeper, who Draft Express thinks could be the Nets pick at No. 55. Michael Gbinije, the 6'6" swingman from Syracuse.  He's a college senior and will be 24 on Draft Nigjht, having lost a year after transferring from Duke.  His age has caused his stock to drop, but he has a number of positives.  He's a very good passer, he's a very good shooter, he's a leader.  He was also a teammate of Chris McCullough and if the Nets do select Udoka, they share something: Both are Nigerian-Americans and played for the Nigerian national team.

The changing skyline of Brooklyn

Anyone who's been to Barclays Center this year can see the outlines of a new skyline around the arena.  The original Atlantic Yards (now Pacific Park) plan called for 16 towers and an arena designed by Frank Gehry. The plan remains the same but a lot of things have changed ... and are still changing.

The first of the three towers on the arena block, 461 Dean, is now nearing completion.  It will be 33 stories.  The other two will be 23 and 52 stories. The first, a residential tower at 38 Sixth Avenue has just started construction; the other, an office tower in revised plans, is expected to rise next year.

The arena block, designed by arena architect SHoP, will look something like this, from the corner of Atlantic and Sixth.  That's the Dean Street entrance on the left... 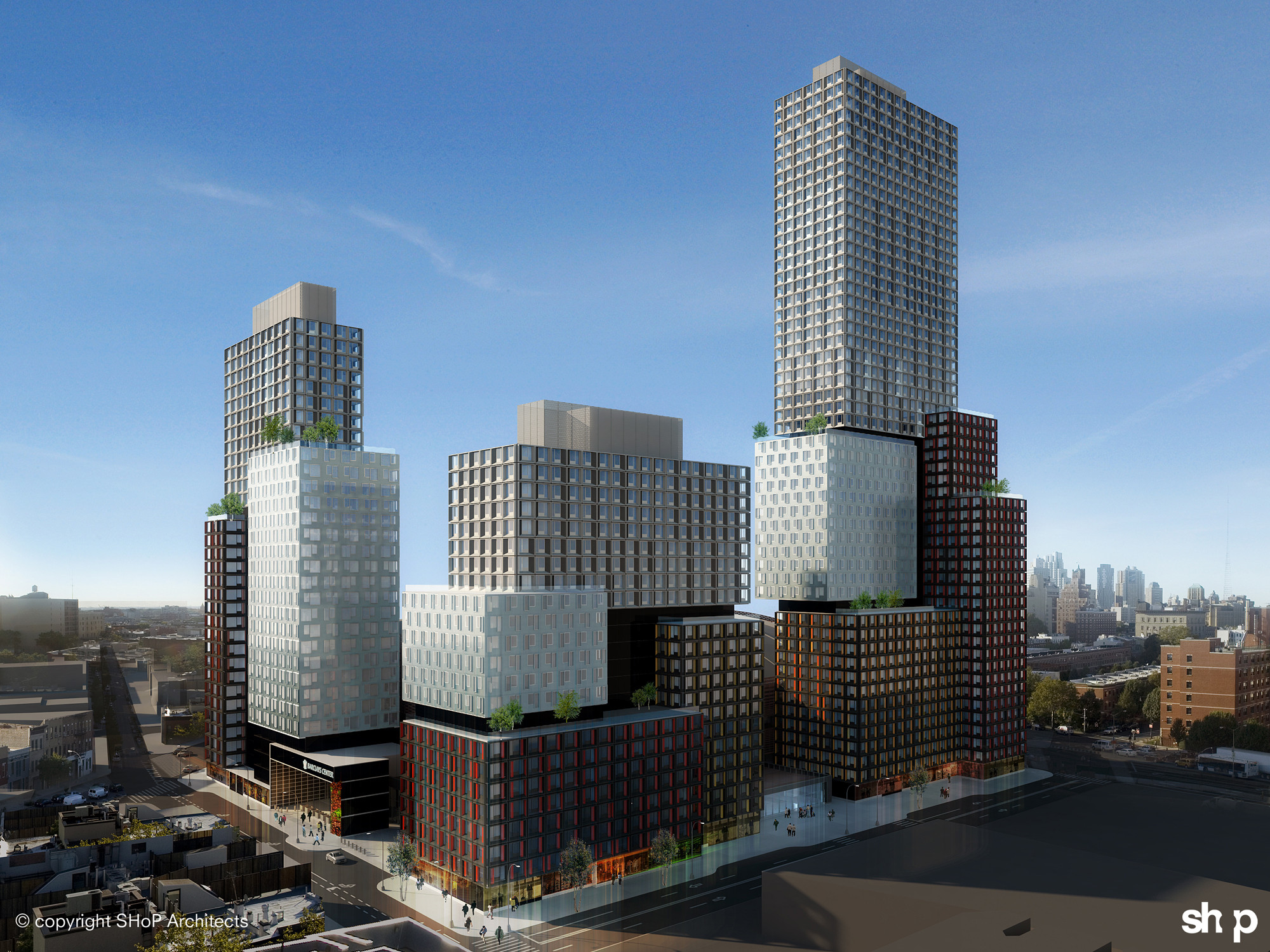 A couple of blocks away there are three Pacific Park towers in various stages of construction -- at 535 Carlton, 615 Dean and 550 Vanderbilt.  All are just short of 20 stories.  New York's City Council has approved a middle school for yet another residential tower, 664 Pacific, which will top out at 26 stories.

But the big news still has to be revealed. Bruce Ratner originally planned to build a giant office tower where the arena plaza sits. But the plaza is now seen as a community amenity and so Ratner and his Chinese partner, Greenland, wants to move the bulk of that tower to "Site 5," where P.C. Richards and Modell's are now.  No one is yet saying how big it will be, but it could be the tallest tower on the site.  Stay tuned.

And that's just on the Atlantic Yards/Pacific Park property.  A few blocks north of Barclays is 333 Schermerhorn, topping out at 56 stories. It's clearly visible from the front of Barclays.  Two months ago, two developers, working with SHoP, the Barclays Center architects, proposed a 1,066-foot, 73-story tower at 9 DeKalb, just above the DeKalb Avenue subway station near the arena.  It would be twice as tall as the Williamsburg Savings Bank.

I'd like to take a minute to thank Gary Sussman for all his professional and personal kindnesses to NetsDaily over the last 12 years.  From facilitating coverage to pointing out errors, typographical and editorial, over the years, Gary did what he could to help out.  As I wrote this, I kept thinking, "this has to be right or Suss will be emailing us!" No more.

Personally, he offered congratulations and humorously noted my all-too-rare appearances at team events. (We have long forgiven him for once referring to us as a "random blogger.")

For 24 years, from John Calipari and the Jason Kidd eras to the move to Brooklyn, Suss was there, sometimes in cryptic "Sussman Sez" notes, sometimes with good news, sometimes with bad, all with good humor.  And there was his long and distinguished stint as the Nets public address announcer, his best calls preserved here.

We wish Suss the best in the next chapter and believe he will achieve it.