Forest City has a week to reconcile debts to Mikhail Prokhorov

Share All sharing options for: Forest City has a week to reconcile debts to Mikhail Prokhorov

According to a filing with the Securities and Exchange Commission Tuesday, Bruce Ratner's parent company has only a week to pay Mikhail Prokhorov more than $25 million in debt --and $6.3 million to cover current team losses-- or see its share of the Nets cut dramatically.

It's also believed the two sides are talking about larger issues concerning ownership of both the team and Barclays Center.  Asked during a conference all with investors Wednesday about reports that Prokhorov could buy the remaining shares of the Nets and the arena, Forest City CEO LaRue demurred. "We haven’t disclosed who we’ve had discussions with. LaRue did say Forest City does not intend to pay the $31.3 million owed Prokhorov by next week. but is "having discussions with our partners on ways to not make that payment."

Norman Oder, critic and chronicler of the overall Atlantic Yards/Pacific Park project, reports that Nets Sports & Entertainment, the Ratner investment vehicle, owes all that money because it has not funded Nets losses since the team's initial season in Brooklyn.

In the last two seasons, Prokhorov funded those losses with a loan, but now the loan is due.  Unless the money is paid, the NS&E stake will drop from 20 percent to 8 percent.  The information comes from a filing made with the SEC by Forest City Enterprises, Ratner's parent company, on Tuesday.  FCE is the majority shareholder in NS&E, with Ratner himself and dozens of other investors (including Jason Kidd) holding small stakes.

The company says in the Tuesday filing that it expects to pay the debt if only because the amount of the debt is less than the value of the lost stake should there be a default.  The deadline has already been extended once.

The filing also notes that...

Those "certain parties" are almost certainly Prokhorov and his investment vehicle, ONEXIM Sports and Entertainment, which owns the majority stake in the Nets and the minority stake in the arena. It's entirely possible that these issues could also be resolved within the context of discussions on the team debt ... and at the same time.

Various reports, including here on NetsDaily, have indicated that Prokhorov is interested in gaining total control of both.  Although the team has lost hundreds of millions of dollars, Barclays Center has generally made a profit ... although Oder points out that FCE filings indicate a loss of more than $2 million the first half of 2015.

The company also admits that the pace of its sale effort has not met expectations, as noted in this FCE graphic... 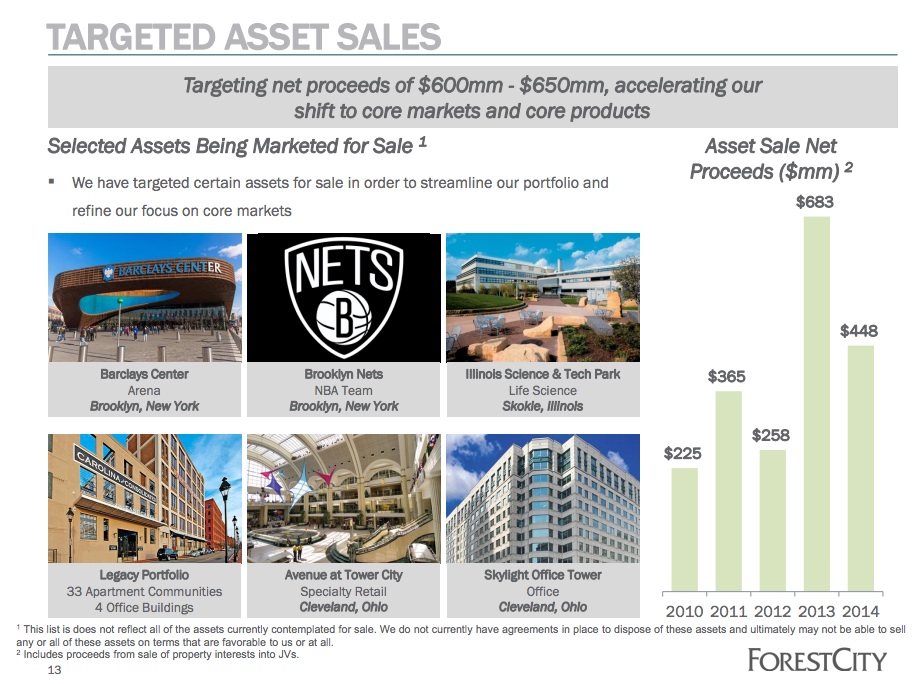