Share All sharing options for: NetsDaily Off-Season Report No. 18

We try to bring a little joy into Nets fans hearts this weekend by offering up some good news --- or at least a dose of optimism after a month in which pundits, mostly from ESPN tut-tutted any suggestion the Nets will be better than the Knicks or ever the Sixers.  Call this the "putrid summer."

Hey, Look!  Not everyone thinks the Nets will suck!

After weeks of negative ESPN analyses of the Nets roster, a few pundits are saying the Nets may not be so bad.  It started a couple of weeks ago when David Alridge offered a mostly positive assessment, putting the Nets in his "middle 10" for the off-season, just below Boston, and suggesting the Nets can "dream" of adding an "impact player" next summer.

Now, Adi Joseph of The Sporting News gives the Nets off-season -- the draft, free agency, the buyout and stretch of Deron Williams -- an A-.

The Nets were cheap this offseason. But that didn't turn out to be a bad thing. They have turned a roster that seemed to have no long term prospects into a young, interesting and perhaps bizarre future. Brooklyn is in a strange position because it doesn't control its own draft picks, meaning there is no incentive to tear things part. Instead, they stuck with the young players who worked and built their identity around athleticism and maybe even defense.

Joseph calls the buyout of D-Will "a fine move," and Rondae Hollis-Jefferson's selection as a "potential lottery talent, and the signing of Thomas Robinson "a good, cheaper replacement" for Mirza Teletovic "with more upside."

The analysis is lacking in some areas. He includes Steve Blake, already traded, as "key newcomer" and doesn't mention Andrea Bargnani at all. Still, after your team's roster has been called "putrid," you'll deal with such issues and nod.

Lindy's Pro Basketball, the magazine-like "annual" goes even farther, suggesting the Nets will win the Atlantic Division.  Individual writers do team profiles, assign a numerical rank to various aspects of each team, then Lindys adds up writers' ranks.  Mark Murphy of Boston Herald wrote Lindys profile of the Nets.

Murphy assigned his highest rank to coaching, giving Lionel Hollins an eight out of 10, and the same number to the Nets centers, led by Brook Lopez. The lowest rank? A six for point guard.

Writing about the success Lopez and Thaddeus Young had at the end of last season, Murphy says it was mostly Hollins. Now with athletes like RHJ and second year player Markel Brown, Hollins has the makings of a defensive core.

Lest anyone forget, Memphis' foundation as one of the best defensive teams in the NBA was built by Hollins.

As gruff and as uncompromising as he can be, including with his superiors, he knows how to built a team from the defensive end forward.  That just might be the Nets new identity.

As for Lopez, Murphy has nothing but positives to say about his game ... but notes, as does everyone, his injury history.  (Few, however, note that this is the first summer that the 7-footer hasn't been rehabbing, just practicing. Or that he's played in 53 straight games without being hurt and averaged nearly 40 minutes per game in the playoffs.)

Though Bargnani is bound to log time here, Lopez is the basis of all that the Nets count on. Hes one of the most gifted post scorers in the league and especially deadly when surrounded by shooters. His mid-range game also sets the bar for other centers.

If Lopez can keep his celebrated feet on the floor, then the Nets inhabit an entirely different place in the conference pecking order. His presence allows Bargnani to pick his spots at the three point line. This could be a very good team at drawing opposing big men out of the paint this season.

Murphy does note the lack of depth up front, something that's bothered us as well.

As for the Jack/Larkin/Sloan combo at the point, Murphy gives the Nets one of the lowest ranks in the NBA.  Still, he likes Jack's steadiness.

The Nets slid into the Eastern Conference's last playoff spots last spring in part because of Jack's ability to maintain stability when Deron Williams was off the floor. Jack also shot the ball inconsistently, a career-long problem.

Another pundit with a somewhat positive outlook on Brooklyn is Sam Amico of FOX Sports.  Writing on his AmicoHoops site, Amico doesn't predict a playoff run, but also doesn't suggest a scramble for the cellar.  He has them 10th in the East in his early power rankings. He also offers some hope...

Not relying on departed Deron Williams is probably a good thing, but depth could be an issue. If not, the Nets may go places.

One footnote to all this. Very few of the pundits offer much on Bogdanovic's ability to improve ... and have an impact on the team's chances.  Murphy, in his Lindy's commentary, has only this to say: "Bogdanovic, based on his play last season, has many Nets types excited."  Meanwhile, Murphy devotes a whole page in the 264-page Lindy's annual to Bargnani. Joseph doesn't even mention Bogdanovic!

--Shane Larkin and Donald Sloan play a lot of minutes, more than you would expect for second and third string point guards. Lionel Hollins had Jack on the court a lot last year.  Jack averaged 28 minutes a game last season, a lot for a back-up.  As a starter, he's not likely to average more.  It you have him play bigger minutes, you risk injury ... and the Nets like both Larkin and Sloan.  Expect a lot of odd combinations this season. As Thaddeus Young told SiriusXM Friday, "We have a lot of guys who can play multiple positions, we're going to be athletic and get up and down the floor."

--Joe Johnson and even Bojan Bogdanovic play a bit of 4 this season. Johnson has played it in the past, in small ball sets, but it would be somewhat new for Bogie.  The Nets depth upfront is a bit suspect with Andrea Bargnani's injury history, Thomas Robinson's inconsistency, Willie Reed's lack of experience and Chris McCullough's uncertain start date. Johnson has made it known that he doesn't like playing the 4 and with his durability one of his great assets, you don't want to risk injury to him.

--The Nets go to Brook Lopez early in the season, establishing him from a variety of places and spaces on the floor.  As Hollins accurately noted during the Nets playoff run, Lopez was doing the unexpected in large part because of the big guy's confidence in his foot. He took more chances and it paid off.  Lopez is coming into camp the healthiest he's been in Brooklyn. So, expect a more expansive game from him.

--The Nets sign another camp invite or two.  Over the past two years, the Nets have signed a number of players to training camp deals in September.  Two years ago, they signed Jorge Gutierrez, Chris Johnson and Gary Forbes on September 27 and Marko Jaric on September 30. They even added Adonis Thomas on October 18.  Last season, they added Jerome Jordan on September 9 and Willie Reed on September 23.  Plenty of time to work out that final training camp roster. The Nets have 17 players under contract now.  They can bring as many as 20 into camp.

Arriving in camp, one by one

Slowly, but surely, the Nets players are arriving in New York for the traditional start of informal workouts.  The two rookies and Markel Brown have been around for a while. Sergey Karasev has been rehabbing as has Chris McCullough, who as we'eve seen is dunking on the sly. Quincy Miller has been working out with a trainer in Jersey City with an individual trainer

Among others who've been seen recently around East Rutherford are Joe Johnson, Jarrett Jack, Thaddeus Young, Shane Larkin and Willie Reed.  There may very well be others. Bojan Bogdanovic and Andrea Bargnani of course have an excuse, Eurobasket.

This is not something the team can arrange. it's up to the players. We assume Jack and and/or Johnson had a big role,  just as they did when seven vets flew into Las Vegas to cheer on the summer leaguers.

This week's news about progress at the HSS Training Centerr was accompanied by several stories about the Nets landlord, Industry City, making improvements to the 100-year-old complex of warehouses that stretch along Brooklyn's waterfront.

The idea is that the complex will be the new Meatpacking District with youth-oriented businesses, entertainment and eating/drinking options, a "hipster industrial complex," as one wag put it.

For example, here's what the Nets training facility will look like from the street. 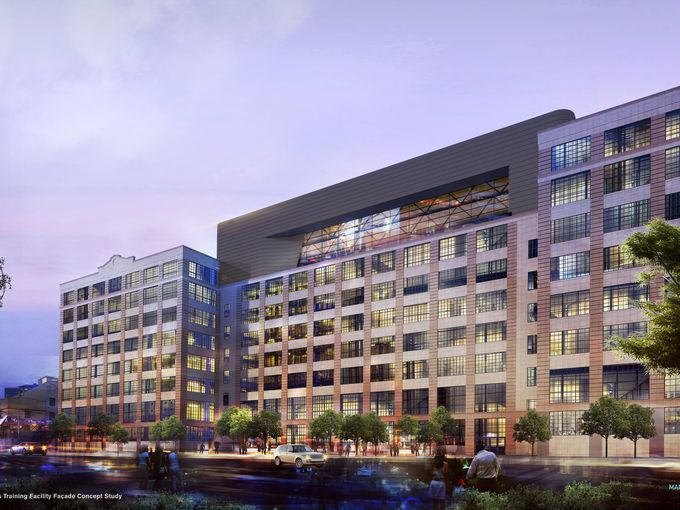 ... And what the row of now dilapidated buildings between the Nets facility and water is expected to look like.

Here's some of the latest news from the Nets neighborhood...

--There will be an "Innovation Alley." announced this week "When complete, innovation alley will be approximately 1,000 feet in length, crossing through nine buildings, four streets and four courtyards and reinforced by a series of red-painted steel square arch ‘wickets’ and floating  steel ‘hoop’ lights that continue through the three types of spaces," said architect John Clifford.  Key to all this connectivity will be raised sidewalks linking things.  {Highline much?)

--There will be "stupid fast" Internet service in the area as well, with speeds of 10 GB per second, enough to download a movie in four seconds.

--There is some early planning for a waterfront streetcar service beginning near the HSS Training Center and  ending in Queens, a shorter term solution than adding new subway lines to an area that is notoriously underserved transit-wise.

Of course, the investment will have to keep flowing in.  The landlords at Industry City, for example, would like New York to finance a ferry stop at 39th Street, two blocks from the training facility. (Maybe the plutocratic Nets players would want to lease their own boats or Mikhail Prokhorov could lend them one of his two yachts. We prefer the Palladium. More room, more amenities.)

it was doubly sad to hear that Darry Dawkins had died at 58, first of course because of the personal loss, but also because he joins a long time of Nets big men who've died young over the last decade or so: Yinka Dare in 2004 at age 32; Armon Gilliam in 2011 at age 43; Orlando Woolridge in 20122 at 52 and both Anthony Mason, 48 and Jack Haley, 51, both this year.  Each died suddenly of a heart attack, something very tall men are prone to.

And if you can only read one story on Dawkins extraordinary life, read Fran Blinebury's tribute.