From green roof to massive towers, Barclays Center look about to change

Share All sharing options for: From green roof to massive towers, Barclays Center look about to change

Barclays Center opened in September 2012 to eight Jay-Z concerts, followed quickly by the Nets inaugural season.  Now, the arena and surrounding properties in the Pacific Park (formerly Atlantic Yards) complex are undergoing a second phase of construction, one that will change the look of the arena and neighborhood ... and see construction cranes proliferate.

This new phase includes work at the arena -- things like construction of new locker rooms for the Islanders and the installation of a new green roof -- as well as on the facility's periphery -- the re-start of one 33-story apartment tower at one corner of the arena and the start of a second, 23-story, tower at another corner ... plus excavation for two more, 17 and 19 stories, nearby. Also underway: design work on a new elementary school in yet another tower coming across the street. The arena is about to become the center of a new neighborhood, which Forest City Ratner would like you to call Pacific Park, and, it hopes, a new Downtown Entertainment District, one that would be anchored by the rehabbed Paramount Theater on the north to the Brooklyn Academy of Music on the south.

While the locker rooms and the green roof should be done by the start of the Nets season, expect to see construction cranes surrounding Barclays Center for years to come ... with some of them changing access to the arena.

Here's a summary of what's going on...

The "Islanders Campus" - Barclays "broke ground," as it were, on April 7 for the new "campus" of the Nets new neighbors. There will be a new oval-shaped locker room, custom wood lockers, a players’ lounge and dining area, treatment and training rooms, a coaches’ suite, fitness facilities, a game video screening room, therapeutic cold tubs and state-of-the-art technology. It's expected to be completed by mid-August, just prior to training camp.

The "Green Roof" - Aided by a crane, workers have been installing more than 30,000 boxes of sedum across the curved roof to give residents of nearby high-rises, including the three Pacific Park apartment towers that will be built on the arena's edge, a greener, more pleasant view, capture rainwater, and give neighbors a buffer against concert audio. As Tom Kaminsky's helicopter images show Tuesday morning, the roof is about a third covered.

The WPIX TV Studio - Just completed, this roughly 1,000-square-foot space in a former retail space on Flatbush Avenue is sponsored by Hyundai, the Korean automaker, in in a deal done by the station, not the arena. It will produce live segments during four daily news shows plus a portion of two weekend news broadcasts. Brooklyn Sports and Entertainment, which runs the arena, and the station will work together to produce original content tied to special events at the arena.

The Re-Start of B2, aka 461 Dean Street - The world’s tallest modular tower may actually reach its full height of 33 stories after all. After contract disputes between Forest City Ratner and its partner, including some ugly lawsuits, delayed it for nine months, prefab uints are once again being manufactured (at Brooklyn Navy Yard), transported to Dean and Sixth, and stacked like lego pieces. After being stuck at 10 stories because of the dispute, the tower is now nearing 13 floors.  It's expected to be complete at the end of 2016.

The Start of B3, aka 30 Sixth Avenue - The second of three towers planned for the arena periphery, the 23-story residential building is expected to get started next month and be finished in the third quarter of 2016, ahead of its prefab neighbor. This tower is likely to have the most effect on fans since its construction further up Sixth and Dean will constrict entry at the arena's Dean Street entrance, where Barclays Center staff will often re-direct fans. (There's also scaffolding along Atlantic Avenue near the Calvin Klein and Emblem Health entrances, slowing access there.)

A New Elementary School - A school with 616 seats will occupy the bottom floors of a new 27-story tower across Sixth Avenue from the back of Barclays between Dean and Pacific streets. It's where three small residential buildings were recently condemned -- and residents forced to leave.  The tower, known now as B15, it is expected to get underway in July of 2016, with completion in 2018. The school could open that school year or the next.

535 Carlton and 550 Vanderbilt - Two new Pacific Park apartment towers a block and two blocks east of the arena are also underway. Excavation and preliminary construction have begun on the two following ground-breaking last December. The 19-story Carlton is expected to be complete in July of next year and the 17-story Vanderbilt a month later.

It won't end there. In all, there are 15 towers planned for the 22-acre property, with six of them to be built on a massive platform covering the LIRR's Atlantic Yards rail depot ... where there's also construction going on. Some of those won't be completed for another decade.  The tallest residential tower, a 55-story building at the northeast corner of the arena, won't start until 2017. The big question is what happens to what Forest City Ratner calls Site 1, which was supposed to be a massive office and hotel complex but is now the arena entrance plaza. The project was delayed after the economy collapsed. The office tower could be revived, leaving the state of the popular plaza uncertain.

What might it look like in the end, a decade from now?  Here's a model that was displayed for Chinese investors last year ... and published by Atlantic Yards/Pacific Park Report 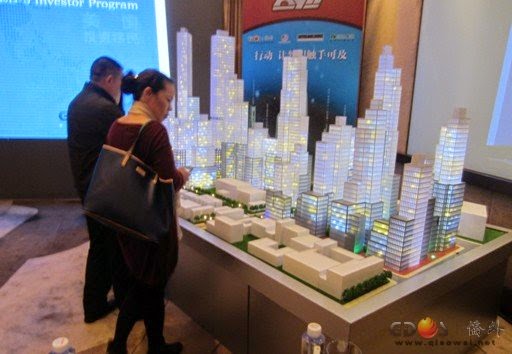 The arena is at the far left, obscured by towers.