Share All sharing options for: Mikhail Prokhorov's growing empire suggests he's a buyer, not a seller.

In article after article, commentary after commentary, there are predictions that Mikhail Prokhorov and his ONEXIM Sports & Entertainment could be getting ready to sell. Even some fans, distraught with the Nets situation, have suggested it. But team officials and league source have long said Prokhorov is likely going to market a piece of the team, and/or Barclays Center, not walk away

And in fact, a survey of Prokhorov's most recent moves --and not just the big one, the consolidation of ownership in the team and arena-- show that he's in a buying mode, not a selling mode and it's accelerating. Prokhorov is getting into the venue business ... in a big way, increasing his control of the bricks and mortar of basketball, expanding his NBA presence and setting up Brooklyn Sports & Entertainment, the apparent parent company, as a sports management corporation to run it under the leadership of Brett Yormark.

The moves have been made piecemeal over time, but when viewed from 30,000 feet, they represent a whole new business model for a Russian oligarch who began in mining and finance, but has diversified both in terms of operations as well as geography.

Of course, the question arises, Does all this suggest interest in the Nets is less than what it has been?  Prokhorov has said that he will continue to invest in what the Nets need to win, telling NetsDaily a few weeks ago, "the only thing I care about is building a winning team."  Still...

Here's a summary of the investments...

After owning 80 percent of the team since May 2010, Prokhorov's ONEXIM Sports & Entertainment agreed in early December to buy the remaining shares of the team and the 55 percent of the arena, officially the Brooklyn Events Center LLC. The two entities, according to Bloomberg News, will have combined valuation of $1.9 billion. There's been no breakdown of the valuation, but each are believed to be worth $1 billion or so separately.

The Nets closed on the purchase of a D-League franchise, the Long Island Nets, last month. The team will be housed for one season, 2016-17, at Barclays Center, then move to the renovated Nassau Coliseum after that. The cost of the expansion club, paid to the NBA, was $6 million. The team is not likely to make money.

Prokhorov has no financial investment in the Islanders but its business operations are run by Brooklyn Sports & Entertainment as part of a unique arrangement set up when the Isles decided to move to Barclays Center.  That agreement included the provision that BS&E pays the Islanders ownership an annual fee - somewhere around $50 to $100 million -- to play at Barclays Center.  In exchange, BS&E acquired all ticket and suite sales, sponsorships, marketing and promotions and their revenue ... and and runs the back office, everything from ticket sales to public relations. Once a certain level of revenue is achieved, BS&E gets the rest

Price tag: Prokhorov, through his ONEXIM Sports and Entertainment Holdings, paid $223 million for 80 percent of the Nets; 45 per cent of the arena and a 20 percent option on the overall Atlantic Yards project, since abandoned. He also purchased $76 million in bonds (at 11 percent) to finance the non-revenue producing parts of the arena.

In December 2015, Prokhorov purchased total control of the arena from Forest City Ratner and more than 30 other entities comprised of more than 50 individual investors, including Jason Kidd.

Nets connection: home of the Brooklyn Nets from 2012-13; home of the Long Island Nets, in 2016-17, with the team planning double-headers of the D-League and NBA teams, a lot of them.

Notes: The arena will be the only Prokhorov-owned entity in Pacific Park, the renamed Atlantic Yards, but three high-rise residential towers, of 33, 23 and 52 stories, are being built around the arena.

Price tag: Unknown. Prokhorov purchased 85 percent of Nassau Events Center, the partnership that is rehabbing the Coliseum, in November. He is believed to have an option to purchase the remaining 15 percent when the rehab is complete.

Nets connection: Starting in 2017-18, home of the Long Island Nets, the Nets D-League team. The Nets will also play a preseason game at the arena starting that season. In its original configuration, Nassau was the arena where the Nets won its two ABA championships.

Notes: The Coliseum will be the largest D-League arena by far, with the Nets using "curtaining technology" to reduce the capacity for D-League games.

The coliseum will be part of a "Long Island Sports and Entertainment Village" that will include commercial, hotel and entertainment properties.  A single sponsor is likely to be announced soon for the project.

Opening night: Sometime in early to mid-February 2016, when the Nets will be either on the road for their annual "circus trip" or in All-Star Break. This will afford the operations staff an opportunity to move from the Nets long-time practice facility in East Rutherford, NJ.

Cost: $45 million in renovations to the property plus an annual lease.

Price tag: Prokhorov financed the renovation of the 8th and 9th floors of Building 19 at  Industry City

Nets connection: The training center of the Brooklyn Nets, starting in a couple of months. The Long Island Nets will train there as well starting next summer before finding its own practice facility near the Nassau Coliseum for the 2017-18 season.

Notes: The Nets business operations staff will remain at MetroTech Center and ONEXIM Sports & Entertainment Holdings will remain at the Seagram Building on Park Avenue in Manhattan. 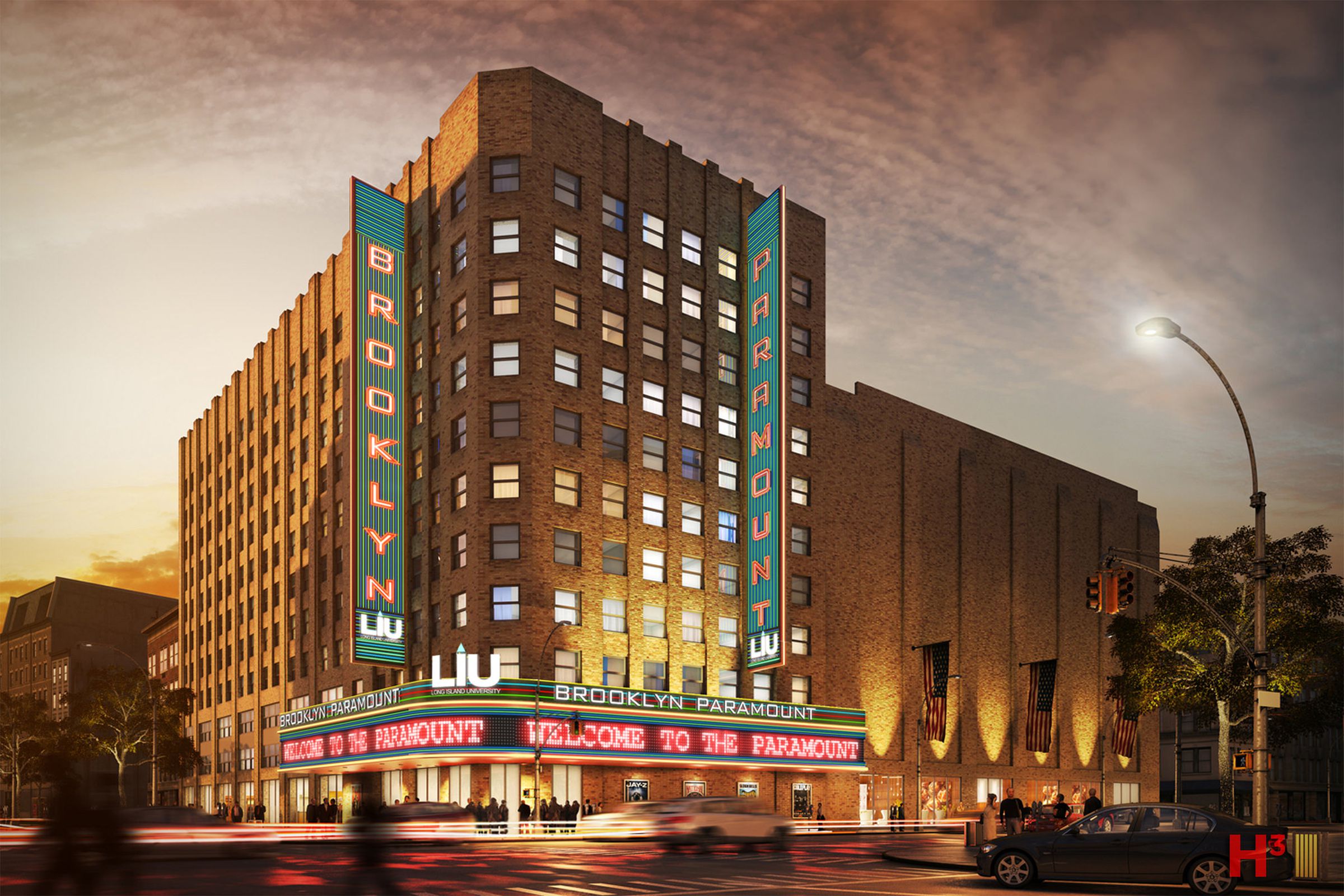 Capacity: 1,500 seats for 120 dates, including concerts, family shows and boxing matches. The venue will have a flexible seating configuration with a capacity of up to 3,500, if needed.

(Re-)Opening Night: TBA but the original plan for the renovation of the theater called for a 24-month renovation. The renovation has yet to begin, but in June, boxing matches were staged at the theater under the Brooklyn Sports and Entertainment rubric.

Price tag: Unknown. Also unknown is whether the Paramount is part of any larger deal.

Lease: A partnership rather than a lease, terms of which have not been released.

Nets connection: Minimal if any.  The theater did play a role in the NBA All-Star weekend earlier this year as the host of the "NBA House" presented by BBVA Compass.

Notes: There's been limited discussion of the PEC, as it will be known, with all the other moving parts of the changes in ownership.

Yormark spoke about the "real estate business" in a talk with a sports business journalist in London two months ago...

"I don't want to say that real estate is driving our enterprise growth or how we look at brands but it does play a major factor. Once we identify from a real estate perspective where we want to go next, whether it's Nassau (Coliseum) or Paramount (Theater) or some of the other things we're working on in our pipeline, then we really do look at the brand architecture of that particular location, the identity of that particular venue, whether it exists or not, and
how we want to position it.

"In the recent decisions we've made, they have been driven by real estate, getting into the real estate market in Long Island, furthering our footprint in Brooklyn and you'll hear in the coming weeks, our first foray into Manhattan. Those decisions have all been driven, based on that we want to grow our venue business, create some scale in and around New York and what's driving that is really the real estate values

Bottom line, Prokhorov is investing in basketball as well as venues and sports management.  He's not putting it up for sale.  In fact, he sees synergy. The next question is now that he has the bricks-and-mortar, what will he do with team operations.