Casting a new light on that TASS reporter's story

Share All sharing options for: Casting a new light on that TASS reporter's story

It was 10 days ago that TASS, the big Russian news agency, quoted a Nets source that Lionel Hollins will be dismissed as coach of the Nets as soon as management can find a replacement.

TASS reporter Andrei Kartashov, a well known and respected Russian journalist, credited a single "team source familiar with the situation" for the story.

"The coach's credibility is at an end, " Kartashov quotes the "team source" as saying. "The club is already looking for a replacement."

Both ownership and management strongly denied the report, calling it "inaccurate" and "wrong."

But wait, there are some intriguing, unreported aspects to Kartashov's report. It was datelined "New York," not "Moscow," and in fact, Kartashov was in New York with ample opportunity to talk to sources in ownership. Turns out that the night before he posted the story, Kartashov was a guest in Mikhail Prokhorov's suite, watching the Nets-Warriors game. Kartashov in fact was around for several days.

In images posted on his Facebook and Instagram pages --and even the ONEXIM company blog -- a few days later, Kartashov was shown at various locations in New York. In fact, there's one picture of him playing pickup basketball with Sergey Kushchenko, a member of the Nets board of directors and Prokhorov's long-time sports advisor...

Kartashov is the bald man with the Brooklyn Nets jersey. Kushchenko is standing to his left with the Mr. Basketball t-shirt.. At the extreme left is Dmitry Materansky, a former Nets employee and an aide to Kushchenko.

In another Instagram image, Kartashov is shown in the suite watching the Nets-Rockets game a few days after his report.

Finally, as part of a Russian delegation of mostly coaches invited to the U.S. by Kushchenko, Kartashov was shown in a group photo with Kushchenko and Dmitry Razumov, the chairman of the Nets board. This image was posted after the Hollins story was published. It can be found on the TASS site and on the ONEXIM company blog. 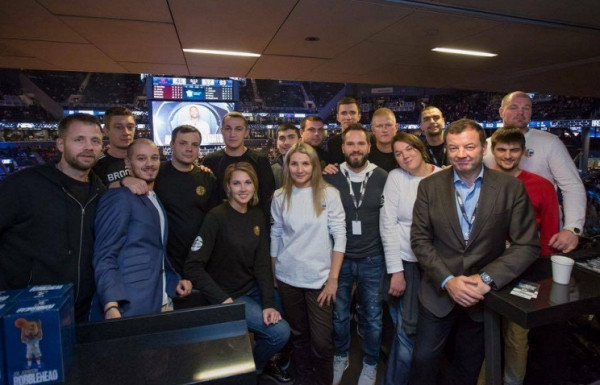 That's Kartashov in the blue suit jacket on the left, Razumov at the center and Kushchenko on the right.

We are NOT speculating on who may be Kartashov's confidential source or whether the report was accurate, but his story can't be so easily dismissed when you see who he knows and who he was talking to both before and after writing that report.