Brooklyn Nets are embracing their ability to space the floor

Share All sharing options for: Brooklyn Nets are embracing their ability to space the floor

Every team needs shooters. It's an essential tool to a team's success. We know that already though. But the Nets may have begun to realize that they have a bevy of shooters littered all over their team that can be utilized.

Last season, the Nets weren't that much of a perimeter orientated team. Of course, the team had shooters that could play beyond the arc, but Jason Kidd instilled an ideology that was built on driving to the rim and shooting shots closer to the rim. Here is the Nets shot chart from last season: 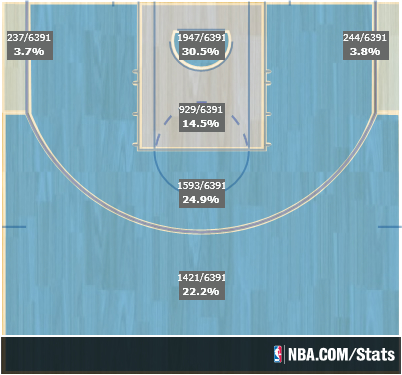 Considering the team spent a majority of their season starting Shaun Livingston, an inept (more like a non-existent) three-point shooter, Kidd and his coaching staff had every right to focus on more mid-range shots. That being said, under Lionel Hollins, the Nets should focus on taking their game away from the paint and playing from the three-point line.

"If I have guys who can shoot, have the ability to read defenses, who have a high IQ, it's probably the best way to play. You don't want to limit those guys by having them standing around on iso and posting up when you can move the ball to whoever's open to shoot," Hollins told reporters Sunday. "When you got a lot of guys who can shoot, you don't have to call plays so one guy can shoot. You can just play and whoever's open gets the shot."

Hollins isn't the only who recognizes that Brooklyn has several capable shooters that can spread the floor, Deron Williams has also picked up on it. "We have a lot of guys who can shoot," said D-Will on Saturday, pausing, then adding, "At every position."

Mirza Teletovic is expected to have a more significant role this season, and we all know he can shoot the lights out. Joe Johnson has shot nearly 39% in his two seasons with the Nets, and Williams is still a capable three-point shooter. With Kevin Garnett in the starting lineup, who has the ability to space the floor despite not being a three-point shooter, the Nets can have several lineups that feature four guys playing 15 feet and out while Brook Lopez or Mason Plumlee roams the paint.

This could do wonders for the team, as the floor should be significantly more spaced than it was last season and give every player more lanes to drive off of passes around the perimeter. Not to mention, Lopez will be able to have the entire paint to shoot like this: 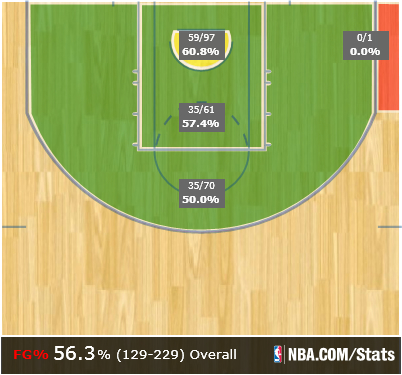 So, the Nets should be a much more versatile team than last season. Jack can give the Nets a different kind of point guard. Jack can play beyond the three-point line and be more of a scoring threat than Livingston. Bogdanovic is more spry than Paul Pierce and could do similar things Pierce did last season, perhaps a  bit quicker ... if not as cleverly. Teletovic will likely see more minutes, and the hope is that Karasev can play spot minutes, first as a floor spacer, as the season wears on.

On Media Day, Hollins was asked who had surprised him in the scrimmages leading up to camp. He singled out Teletovic and Bogdanovic, noting both had shown they are more than shooters, an indication they'll get playing time.

Karsev has been impressive in drills. Watching the lefty after practice, he seems to hit the same spot in the net every time. Then there's this board. It tracks how many shots it takes players to get to 70 made threes. Karasev almost knocked off the reigning champ, the seven-time All Star. 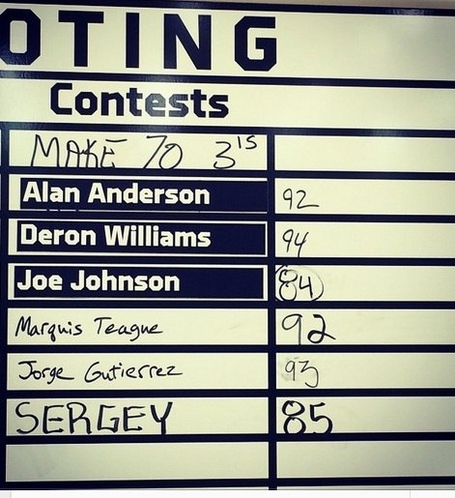 The Nets mantra for last season was being smaller, but quicker and smarter, able to get into the teeth of the defense. However, with the way the personnel has worked out this off-season, the Nets may focus more on staying away from the rim, moving the ball from side to side, as Hollins notes, and letting the ball go from 20 plus feet.

Joe Johnson, who knows something about shooting, admitted he hadn't seen much of Karasev and Bogdanovic yet, then smiled and pointed to a higher standard they'd have to meet.  "They can't be better shooters than Mirza!"