Offseason Recap: A look at who and what the Nets lost this offseason on the basketball court

Share All sharing options for: Offseason Recap: A look at who and what the Nets lost this offseason on the basketball court

The Brooklyn Nets and their capped-out roster came up short of championship aspirations last season when they fell in the second round to the Miami Heat. So now, here we are yet again with another dramatic offseason in the books and training camp just weeks away. Naturally, questions will be addressed as far as the new coaching situation, health, game plan, and the transformed roster containing the same stars, but a different group of supporting role players has entered the mix. With that comes the departure of a few key players.

Today, I'll look at who and what we lost this offseason, starting with a player who is a better ambassador to the game off the court than he is productive on it.

Pooch's Picks: The Five Who Got Away

Last season, Jason Collins didn't receive much of a role with the Nets. The acquisition of Collins was mostly to give Jason Kidd an insurance policy: to always have a big man he could see at the end of the bench, just in case more injuries occurred or Kevin Garnett needed extra time to rest. Collins received about eight minutes per contest, averaging 1.1 points per game. His impact on the court wasn't nearly as large as the impact he made around the league, and throughout the nation, most notably in the TIME's ‘100 most Influential People' list.

Being the first openly gay professional athlete is what most people will remember of Collins' final NBA season, but his signing proved value for basketball purposes, with Lopez out, Garnett down with back spasms and Mason Plumlee new to the game. As for his career, he has bigger things to do off the court than on it.

With the Nets becoming winners again just before last year's All-Star break, Billy King was looking to improve the team in any way he could, despite having minimal flexibility. As we've seen through King's managerial career, his ability to turn nothing into something has often been a work of art. He traded Reggie Evans and Jason Terry to the Sacramento Kings for the sharp-shooting swingman, Marcus Thornton. We saw Thornton's ability to heat up in the blink of an eye, but his lack of consistency was the cause for a smaller role in the playoffs. In a Nets uniform, Thornton averaged 12.3 points per game, while shooting 38% from three, and 41% overall.

It seemed when Thornton's shots weren't falling, he was a liability on both sides of the ball. If his offense was off, there was no way of depending on his defense to pick up the slack.

Of course what the Nets gave up for Thornton --and what they later got for him-- made the debate over his time in a Nets' uniform one-sided. When you trade two non-factor players for a guy who can contribute 12 points per game, it's fair to say the trade worked out for the Nets.  Then, the Nets sent Thornton to Boston in exchange for Jarrett Jack. King and the Nets organization are hoping that Jack can fill the role of backup point guard, and once again, gain something from what is essentially nothing.

It wasn't necessarily his best game as a Net, but this video shows how fast he was able to heat up and make a serious impact. As mentioned, his inconsistency was an issue, but his spark off the bench will be missed.

"The worst thing in life is wasted talent," the famous quote from Robert DeNiro's "A Bronx Tale." Blatche has plenty of talent, but it's always a shame when a player's immaturity off the court overshadows (and rightly so) the good he brings to a team on the court.

For the $1.37 million the Nets paid for Blatche in the 2013-2014 season, the risk was worth it. His two seasons in Brooklyn showed the league that he can still contribute and be a solid offensive big  -- especially off the bench. The role that made him worthwhile in Brooklyn, backing up Brook Lopez, may not be as important next season if Lopez remains healthy. Blatche averaged 10.7 points and 5.2 rebounds in 20 minutes per game during his tenure in Brooklyn.

His inconsistency and off-court issues, however, seemed to play a role in Jason Kidd decreasing his minutes during the playoffs. His 22 minutes per game average during the season fell to 14 minutes per in the playoffs, where he averaged only 6.4 points per game.

Blatche's offensive spark off the bench will be missed, and so too will his stressful-but-fun behind the back And-One mix tape-like-moves. But clearly other issues were so overwhelming that it was time for both the Nets and Blatche to go their separate ways.

(Who said Blatche couldn't play point guard? No one!)

It's easy to root for a guy like Shaun Livingston. Whether he's in a Nets uniform or not. Livingston's comeback story is as good as it gets and the Brooklyn Nets helped write the script.

Livingston's success was crucial to the Nets turnaround last season. Deron Williams was noticeably hurt and Brook Lopez was out for the year. Jason Kidd didn't have many options because he essentially had zero ‘natural' centers to fill Lopez's shoes. So, instead of big or small, he went "long."

Shaun Livingston was the ideal player for the "small ball' system Kidd implemented midway through the season. With the 6'7" Livingston playing combo-guard side-by-side with Williams, it enabled him to take advantage of much smaller guards in the post and on the defensive side of the ball. His ability to force turnovers became a large part of the Nets scrappy identity. With that "scrappiness" came forced turnovers. His natural PG talents helped the Nets finally get their offense to excel with the increase in fastbreak opportunities.

Livingston quickly emerged as one of the most important role players on the roster. He was brought in to backup Deron Williams, but ended up starting 54 of the 76 games he played in. In 26 minutes per game, Livingston averaged eight points on 43% shooting.

Nearly everything about Livingston's game was perfect for the Nets' system last year, but a major flaw in his offensive skill was his inability to hit the three. When teams finally adjusted, the Nets struggled to find open shots because the defenses would sag off Livingston, so much so that it would sometimes clog the paint. If he would've  hit the three on occasion, his value could've skyrocketed (even more) than it did this off-season.  Still, he will be severely missed and Jarrett Jack will have very large shoes to fill, whether it's backing up Williams or playing side-by-side with him.

The deflection heard around the world. Who else can cite a time they went so berserk over a regular season victory?

This one was hard for the Nets faithful to swallow. After all, it's never easy to watch someone like Pierce, a future Hall of Famer and leader on the floor, walk away after one season.

Pierce seemed a step behind during the early stages of the season. Emotionally and physically, he just didn't look like the player Billy King and the Nets had expected. But just as Livingston excelled under Jason Kidd's small ball adjustments, Pierce took advantage of sliding over to the '4' and matching up against the slower power forwards. He was able to spread the Nets' offense around the perimeter, which opened up the paint for the rest to penetrate to the basket, or swing it around and find the open shot. Of course with that, the Nets were very undersized and were often out-rebounded, but it was a risk worth taking. They essentially had no other choice.

Pierce's points per game average of 13.5 was the lowest of his career, including his rookie season when he averaged 16.5. Still, it doesn't seem like his offensive game dropped off too much, but his career average before joining the Nets was near 37 minutes per game. Last season's average of 28 made a big difference in his numbers. 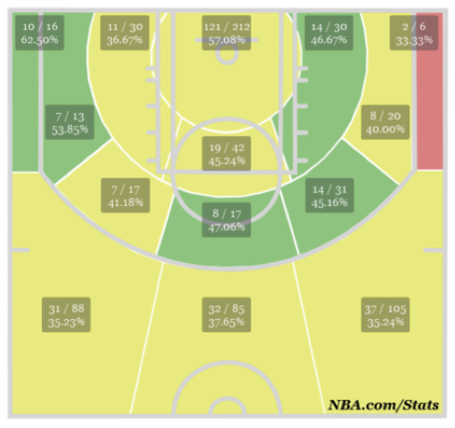 Pierce shot 37% from three on the year, averaging about two made threes on five shot attempts per game. The 37% actually matches his career average from downtown. Overall, he shot a stellar 45% from the field, also hovering around his career average. Keep in mind he struggled early in the season.

Pierce's longevity in Brooklyn may have been shorter than expected, but he certainly left the organization with plenty of great memories, some that only legends can cite in their careers. "This is why they got me here" and the series-winning block on Kyle Lowry stick out the most. The Pierce-era in Brooklyn was a fun one, one that the fans will miss, and the team will certainly miss as well. You only get a leader like Paul Pierce on your team so often.

Despite the losses of these important players, there's no reason for panic or pessimism heading into the next season. With the addition of new head coach Lionel Hollins, along with players such as Jack, Bojan Bogdanovic, Sergey Karasev, Markel Brown, and Cory Jefferson, maybe even Jerome Jordan, this upcoming season has plenty of things to be excited for.

Oh yeah, and if all goes expected, Deron Williams and Brook Lopez should be 100% healthy at the same time. Really, that's the first time we can truly say that.