Brian Fleurantin has been one of our writers for a bit more than a year,. He does our game previews and is well respected by our fans and by us. Our respect for him grows with this essay on the real issue in Atlanta, that despite a lot of self-congratulations, the NBA has a diversity problem, a big one.

Share All sharing options for: The NBA's Atlanta Hawks problem

On Sunday afternoon, the landscape of NBA ownership changed for the second time this year. Atlanta Hawks owner Bruce Levenson announced that he would be selling his portion of the Atlanta Hawks after revealing that he wrote a racist email in June of 2012. In it, Levenson worries about the team's success at reaching fans. The key section from the letter:

I have been open with our executive team about these concerns. I have told them I want some white cheerleaders and while i don't care what the color of the artist is, i want the music to be music familiar to a 40 year old white guy if that's our season tixs demo. i have also balked when every fan picked out of crowd to shoot shots in some time out contest is black. I have even bitched that the kiss cam is too black.

Gradually things have changed. My unscientific guess is that our crowd is 40 pct black now, still four to five times all other teams. And my further guess is that 40 pct still feels like 70 pet to some whites at our games. Our bars are still overwhelmingly black.

This is obviously a sensitive topic, but sadly i think it is far and way the number one reason our season ticket base is so low.

Although this doesn't fit the definition of how we see racism in most discussions about race relations (basically, you have to call someone a racial slur to actually be viewed as a racist), this letter is very much racist. I don't know whether Levenson personally is or is not a racist, but it doesn't matter (for what it's worth, I don't think he should have lost his ownership stake). Telling your colleagues that Black people's money is not good enough, their presence is scaring away (prejudiced white) customers and making changes to appease those prejudiced customers is racist. Tailoring your organization to better accommodate your customers is one thing, but doing so while you tear down a large portion of your fanbase is another. There are also a variety of complex factors that influence the Hawks attendance figures, and it's something a lot of us (myself included) need to learn more about. Just calling Hawks fans apathetic, lazy or whatever is overly simplistic, inaccurate (go back and watch their first round series vs. Boston in 2008 and tell me that's an apathetic crowd) and doesn't add anything to a complex conversation.

I was reading about the situation and this article, and more specifically the quoted section below, by Colorlines' Jamilah King stood out to me:

But the focus on individual racists and misogynists and homophobes is too limited. The bigger problem is structural.

This brings us directly to the second, more important, problem to arise from this situation. Hawks General Manager Danny Ferry (the actual recipient of Levenson's email) was disciplined for a racist remark, but no one knew what was said and to whom it was directed. As it turns out, the offensive comment was in regards to then free agent and current Miami Heat small forward Luol Deng. Reading off of a report from someone that wasn't a member of the Hawks organization, Ferry said (PDF file) of Deng:

"he has a little African in him. Not in a bad way, but he's like a guy who would have a have a nice store out front but sell you counterfeit stuff out the back."

Ferry completed the racial slur by describing the player (and impliedly, all persons of African descent), as a two faced liar and cheat.

Here's the actual audio of that conference call.

I had a few reactions to this. The first was straight up confusion as I had no idea what the hell Ferry was thinking or talking about. I read that section and said to myself "Why would you say something like that about anyone, let alone a player you're interested in acquiring?" If you're reading something and [Insert slur of your choice here] appears in front of you, you need to have enough sense to not recite it, go about informing the proper officials about the slur, find out who wrote that on an official document, and make sure they receive the appropriate punishment. Also, in addition to being a good player, Deng is one of the league's best representatives. He's active in the community, beloved by fans, spends lots of time doing charity work and will play through any injury so he can try to help his team win games. For a player as good and as well liked as Deng to be stereotyped in that fashion, you have to wonder what the author of the report and possibly Ferry himself view other players around the league.

The second thing I thought was that there's no way Ferry keeps his job. When you say something that offensive (even if you didn't write it yourself), you antagonize your colleagues around the league, fans, and players that might be interested in joining the organization down the line. For a team like the Atlanta Hawks that hasn't made it to a Conference Championship series since 1970, a Game Seven in the second round since 1988, or had a superstar player since 1994, you can't afford to alienate people that can help you make more money or win a Championship. It seemed highly likely that the Hawks would fire him, but they decided against that on Tuesday. Hawks CEO Steve Koonin says Ferry will remain the GM of the team and the Commissioner said he doesn't see this to be a fireable offense. I found this to be problematic because it sends a message that, on company time and official league documentation, you can communicate something that offensive about one of your players and not face any consequences. The Commissioner cited context as a reason for why Ferry shouldn't be fired, but there haven't been any mentions as to who was behind the report that got Ferry jammed up and the consequences that person will face. Meanwhile, Silver went full bore at a person for racist comments but his previous history of racism was ignored by the league office for years and his wife has reaped the benefits of it.

The third, and most important, was that the Hawks' upper management must not be diverse at all. Ferry can say he was repeating the comments he saw on the report all he wants, but the fact that his internal sensor didn't go off speaks volumes. Diversity isn't just having people that don't look like you or share your background at the table. It means having them at the table, but also involving them in decisions, valuing their opinions, treating them with respect and working to change any biases or preconceived notions you may have had.

In keeping with that theme, the point made by Jamilah King above about structures was something that was hinted at by Michael Gearon in his email about Ferry's comments. He wrote:

We also note that the racial diversity of our management team has changed for the worse since Ferry took over.

When you take a look at Atlanta's staff makeup, that seems to be the case. If you take a look at the front office of Atlanta (ownership, executive management, and basketball operations), there are 22 positions, and of those 22, only four are occupied by non-white people and only one woman. Three of the four, Dominique Wilkins, Duane Ferrell, and Carole Harding were in the organization before Ferry joined in 2012 and in the case of 'Nique, spent his best years as a player with the team. The fourth, Jeff Peterson, received a promotion from Basketball Operations seasonal assistant to Scout and Coordinator of Basketball Operations. In previous seasons, there was a greater mix of diversity within the management ranks, although it wasn't much to write home about.

In recent months, there has been more discussion about the league's lack of diversity in certain parts of the game. Becky Hammon was hired by the Spurs to be an assistant coach, making her the second woman (first full time) in league history. Natalie Nakase has been working at her craft around the world and hopes to join an NBA staff as a coach full time soon. In the head coaching ranks, there is more diversity, but when you dig a little deeper, there's a trend you start to notice. Of the ten who aren't white men, only two (Erik Spoelstra in Miami and Dwane Casey in Toronto) didn't have playing experience. It's fantastic that there is increasing diversity in the head coaching ranks, but if the only way to break through is if you used to play in the league, it spells trouble for those who didn't play in the NBA. It speaks to the pipeline (or lack thereof) that Tom Ziller broke down further over at the mothership.

When we move to the upper levels, the lack of diversity becomes even more apparent. Of the thirty General Managers/President of Basketball Operations, only three are not white men (Masai Ujiri in Toronto, Doc Rivers in Los Angeles and Billy King in Brooklyn). And when you look at those three, King is on his second tour of GM duty after working in Philadelphia, Rivers is the head coach, and Ujiri previously worked in Denver. And at the top of the mountain? 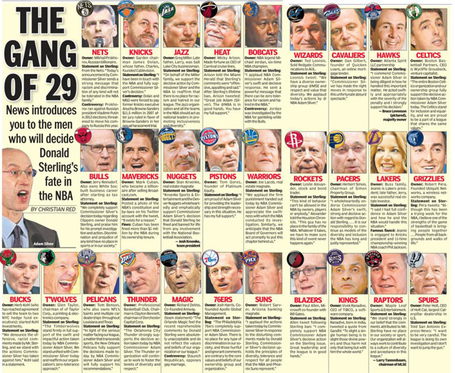 More of the same.

Although this was written in the context of journalism startups, this quote from Shani Hilton could just as easily apply to the Hawks, coaching, and NBA management at large:

If all you’re turning up is white dudes, that’s a feature, not a bug, in the system. It seems obvious, but sometimes the pipeline is the problem. Look at the sources of your references, beyond your friends and immediate colleagues, and evaluate whether you’ve done all you can to make sure you’re considering a wider variety of backgrounds than, say, white guys from different parts of the country.

The NBA has done a great job of reaching new people around the world, but they have a diversity problem at home. When only one group of people can access leadership positions, it's a problem that needs remedying. In 2014, we shouldn't be asking whether the NBA is ready for a female coach, if there can be more than three black general managers working at the same time, or if you have to be golf buddies with the owner to get a job with a young team on the rise. Diversity isn't a cure all that will automatically fix institutional issues in the league or prevent situations like Atlanta's or the Clippers', but it's a good start and an improvement over the situation we have right now.