Film Study: Can Lionel Hollins use Brook Lopez the way he did Marc Gasol?

Share All sharing options for: Film Study: Can Lionel Hollins use Brook Lopez the way he did Marc Gasol?

The Nets have former Memphis Grizzlies coach Lionel Hollins calling the shots now, but this Brooklyn team is not Memphis. The Grizzlies lacked much offensive firepower, won games on the defensive end, and built from within their organization. And they did it without paying a lot of luxury taxes.

Is Brooklyn starting to move towards Memphis' philosophy?

Looking at the on-court product, the Nets are still lacking what the Grizzlies had under Hollins. The team lacks the raw defensive talent to mirror the Grizzlies, but on offense, the Nets are more talented. It's not yet known what style of offense the Nets will run during Hollins' first season, but it would make sense for Hollins to stick to what he knows best.

The Grizzlies were a rather poor offensive team, but they had the right system in place, putting a big man (Marc Gasol) at the high post and having the offense run through him. Players like Mike Conley and Tony Allen got their fair share of points cutting off of passes made to Gasol, who would finds them with an often eye-popping pass, fanstastic for any player, let alone a big man.

So, the Nets have Brook Lopez returning from injury, a big man who is versatile on the offensive side of the ball, much like Gasol. Hollins may have himself another Gasolian big, at least on offense. Lopez is by no means the passer  Gasol is, but who is?  The longest tenured Net is an above average passer for a big man. That's for sure. Gasol and Lopez can both shoot from anywhere inside the three-point line, post up any defender, and dribble the ball efficiently. Watch three different types of plays that Gasol makes often, as he did in Memphis during Hollins' last season and that Lopez made to a lesser extent over the past two seasons with the Nets.

Gasol is clearly the more advanced passer, but it's clear the Lopez is also a capable distributor, especially for a man of his size. If Hollins was to use a similar system in Brooklyn that he ran in Memphis, Lopez can provide some passing from the high post that was a key cog to the Grizzlies' offensive success.

However, Lopez finding his teammates is half the equation: his teammates have to get open first. The Nets did not do a lot of cutting in Jason Kidd's system last season. The Nets two main scoring threats --besides Lopez-- were Deron Williams and Joe Johnson. Per Synergy Sports Technology, Williams made a cut to the basket and took a shot on just 2.2% of his offensive possessions last season. Joe Johnson? Only 1.5%.

Both were very efficient when they did so, they shot a combined 28/37 in a cut-and-shoot situation.

The Nets have a lot of ball-dominant players. Johnson has a nickname based on his preference to play with his man one-on-one and Williams also likes to keep the ball in his hands and create off the dribble. Both Williams and Johnson need to become more adept at cutting off the ball to allow Lopez to become the efficient passer he is. Off-ball movement is something that made Andrei Kirilenko a living in the league, and it stimulates ball movement, something the Nets didn't do at times last season.

Another reason why Lopez can play at the high post in a Marc Gasol-like role is his ability to hit a mid-range jump shot. Considering Lopez only played 17 games in 2013, lets look at both Gasol and Lopez's 2012 seasons. 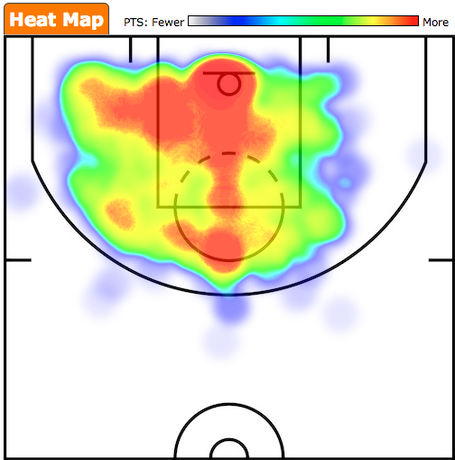 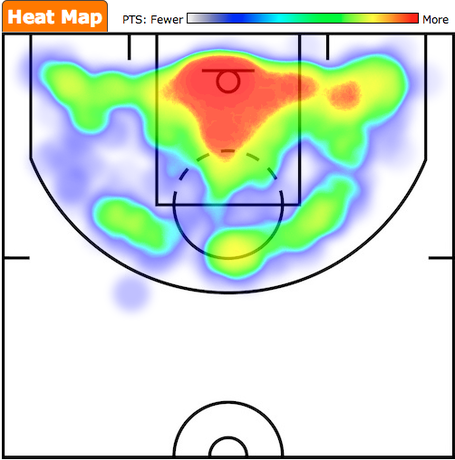 As one can see, Gasol lives above the foul line. The Spanish big man hit on 43% of his shots from in between 10 and 16 feet, a fine mark for NBA shooting guards. Lopez maintained a solid percentage from that range, making 42% of those tries, if at a lesser volume. Could Lopez keep up such a high number with an increased workload under Hollins? That will have to play out over time, but with a solid jump shot already in his arsenal along with a release point so high that the ball is basically unreachable, Lopez should be able to enhance the offense by playing more outside the paint.

Gasol is also a big-time scorer around the rim. He shot 64% around the rim, but Lopez is a force in the post as well. He made 68% of his tries around the rim. Lopez can remain in the post for more time than Gasol did under Hollins, however, with the way he can handle the ball and hit on shots outside of the paint. He would be wise to continue to play out there.

Mason Plumlee may be the front-runner to take over starting power forward duties in Brooklyn next season, with his performance with Team USA and by the opening at the position. If Plumlee does become the starter alongside Lopez, Lopez needs to play outside of the paint more, considering that Plumlee took only nine shots outside of the paint last season. Despite having an emerging jump shot, there is no need to rush him with a versatile threat like Lopez on the floor.

Another place where the Nets deviated from the NBA norm was the pick-and-roll. It makes sense that the Nets went  away from screening so often because once Lopez went down, the team lacked a true big who can set hard screens and Williams lacked the explosiveness because of his bad ankle to turn the corner. Under Hollins, though, expect a lot more pick-and-roll. On 20% of Gasol's possessions in the 2012-2013 season, Gasol set a screen and rolled to the basket, scoring 1.19 points per possession, the 23rd best mark that season.

As I alluded to in a post before Lopez's injury, the Nets don't put Lopez in the PNR often enough. Lopez, despite not playing that much last season, spent 14% of his possessions in the pick-and-roll, which is still not enough. Lopez should be setting as many picks as Gasol does. Lopez can be just as effective if not more so than the Spaniard. As noted, Lopez is both a crafty finisher around the rim who can also hit a jump shot on a pick-and-pop.

It's unclear what kind of offense Hollins is going to run in Brooklyn. This team is blessed with many more weapons than Hollins' Grizzlies teams had in the past. This Nets team has capable three-point shooters all over the roster, and has a more advanced go-to scorer on the wing in Joe Johnson. Both Memphis and Brooklyn have interesting, versatile big men. One, Gasol, may be the best passing big man in basketball over the past decade, while the other, Lopez, is yet to play in an offense that has needed him to pass that much other than when he gets doubled in the post.

Lots of room for improvement ... and creativity.

Hollins should be open to mimicking his Memphis offense to an extent to see what Lopez can do with a more advanced role that isn't just to score at will in the post, but to distribute the ball and be a facilitator as well as a scoring threat, something few big men in the league can do.