In Terms of Reliable ‘Plan B’s’, Jarrett Jack is as Good as it gets

Judging from the past, Jarrett Jack seems like a pretty solid option to backup Deron Williams.

Share All sharing options for: In Terms of Reliable ‘Plan B’s’, Jarrett Jack is as Good as it gets

During the 2011-2012 season, Deron Williams was an elite point guard among the NBA, topping the league with the most points scored in a game (57) and most assists as well (20). He dished out 10 or more assists in 23 games that season, out of 66, despite Kris Humphries being the team's second scoring option. After he signed a hefty contract the following off-season, the expectations on Williams' shoulders were tremendous as the Nets made their move across New York state lines.

But, ever since the move to Brooklyn, injuries and pressure have plagued the Nets' point guard. Other players have stepped up in Williams' absence. Last year, it was Shaun Livingston. This year, we're expecting it could be Jarrett Jack.

Despite averaging just nine points in over 28 minutes per game last season, Jack could be the perfect ‘just in case’ kind of guy. He’s exactly the kind of player Billy King has targeted in a backup, with plenty of veteran experience and playoff success. Not to mention toughness. He’s still only 30 years old and put in the right situation, he could give the Nets a big return on their investment.

Jack's best statistical season was two years ago with the New Orleans Hornets, now Pelicans. He averaged 15.6 points and 6.3 assists per game, starting 39 of the 45 games he played in. The next season, he was the back up point guard for the Golden State Warriors, playing behind and next to Steph Curry and Klay Thompson.  He averaged 13 points per game on 45 percent shooting that season as well as an impressive 40 percent showing from three. In the playoffs, Jack averaged 18 points per game on 50 percent shooting. Although it was only his second playoffs appearance, Jack certainly didn’t shy away from the pressure ... or the spotlight.

How good was he? Take a look at Jack's shot-chart during his hot playoff run with the Warriors in 2012-2013: 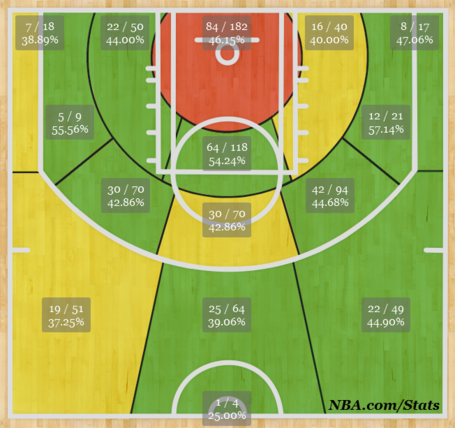 What does this mean for the Nets?

Versatility. It’s key to how every team operates and with Jack capable of starting or backing up Williams, Lionel Hollins will have a very nice option to select from just in case things don’t go as planned. As you can see in the chart above, Jack was average, or above the league's average, everywhere besides the paint during his run with the Warriors. Interesting enough, 68 percent of Jack's converted field goals were unassisted, essentially displaying Jack's ability to create his own shot, while still being efficient.

He can also serve as backup point guard and run the offense for the second unit. After all, this is what he's used to, having come off the bench in 407 out of 691 games played throughout the span of his career, and to his credit, he finished third in Sixth Man of the Year voting in the 2012-2013 season.

As far as running the point for the first unit, it would enable Deron Williams to work off the ball and find better shots. Williams has success in the past when doing so. Last season, Shaun Livingston did a lot of the guard’s dirty work, while Williams was able to run around off-ball screens and find the open shot. It wasn’t always the ideal situation because Livingston’s body physique isn’t one of a natural point guard, but the Nets didn’t have much of an option. They also tried to do that the first year in Brooklyn, but backup CJ Watson was evidently a shooting guard. Even under those circumstances, they still made the best of Williams working off the ball.

Jarrett Jack won’t lead the Brooklyn Nets to the championship, but he’s certainly a reliable player to fill in just in case things don’t work out. As for Williams, if he’s 100 percent healthy, anything's possible.