The Nets have made several moves in the past week, and ShamSports has the numbers on the recent signings. Here is the image from the website with the reported team's salaries: 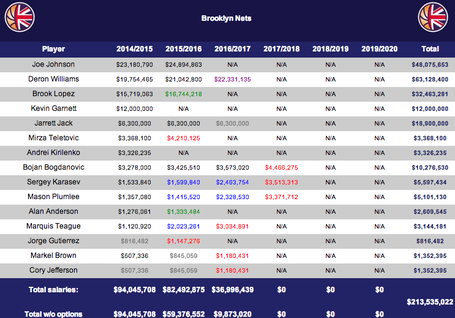 The Nets are paying out a little more than $94 million in salaries for the 2014-2015 season, but with the luxury tax included the number comes out to about $130 million—which doesn't include Travis Outlaws' $4 million amnesty payment—down a significant amount from the reported $197 million total bill that the team paid out last season by the team.

With regard to the Nets recent signings, Bojan Bogdanovic received the taxpayer mid-level exception from Brooklyn, which is worth a little less than $10.3 million over three years with a qualifying offer worth nearly $4.5 million in the fourth year. There are no options with the contract. His deal also has a 15% trade kicker  (the team that receives a player pays out), which is a rarity for a player coming in on a rookie deal. He is being paid about the same as the fourth overall pick Aaron Gordon, taken by the Magic

Markel Brown's deal with the Nets is guaranteed in the first season, a $507,336 contract.  In the second year, his contract is partially guaranteed. He can make up to $200,000 in guaranteed money if he is not waived by the team on or by September 1, 2015. He also has a qualifying offer in year three worth a shade over $1.1 million.

"Mr. Irrelevant" Cory Jefferson can make the same amount as Brown in year one with the Nets -- both are second round picks -- but Jefferson's is only guaranteed $75,000 this season. In year two, if still with the team, Jefferson will make $150,000 in guaranteed money if he is not waived on or by July 15, 2015. Jefferson, like Brown, has a qualifying offer in the third year worth $1.1 million.

Also of note, if Jorge Gutierrez makes training camp, which is expected at the moment, he will cost the team $25,000. His $816,000 contract will become fully guaranteed if he's still on the roster the first week of January.

The two second round picks that became Brown and Jefferson cost the Nets $1.4 million -- $1.1 million for Brown and $300,000 for Jefferson. Both could see minutes but that will be up to a new coach who's trying to sort through the rotation. Bottom line: the Nets paid Brown and Jefferson the standard amount for second rounders, the rookie minimum and Bogdanovic the mini-MLE. If they play well, they will all be bargains.