NBA Draft roundup: The latest rumblings on the Nets pursuit to acquire a draft pick

Share All sharing options for: NBA Draft roundup: The latest rumblings on the Nets pursuit to acquire a draft pick

The Draft is here! Yippie!!! Wait, no, this isn't that exciting because the Nets don't have a pick. Whatever. Despite not having a pick, yet, we can catch everyone up on who we know the Nets have been publicly scouting and bringing in for workouts while also talking about potential trade partners. It will all start at 7 p.m. at Barclays Center.

The Nets were one of 11 teams on hand to watch Tavares workout at Seton Hall's Walsh Gym on Tuesday.

Tavares is currently slated to go 33 to Cleveland in DraftExpress' latest mock draft, and Chad Ford feels similarly, slating him to go 34 to what was the Mavericks but now the Knicks selection.

Tavares is an extremely raw prospect that measures 7'4" in shoes, with a 7'10" wingspan! He doesn't have a go-to move in the post despite his freakish size, but he is able to protect the rim and can rebound well. Tavares can move around the floor well enough and be part of an up-tempo team, something Jason Kidd has tried to establish even though the Nets were a little too old for that last season. He will likely be stashed overseas for a year so he can refine his game. He has a three-year commitment in Spain, with a $600,000 NBA "out" after the first year.

Brooklyn brought in 13 prospects to the PNY Center in East Rutherford for a private workout. The group was led by Syracuse's C.J Fair, North Carolina's James McAdoo, and Russian big man Artem Klimenko.

Klimenko reportedly has an ankle injury, so he canceled several of his workouts with teams, but kept the Nets on his list. The Russian and Johnny O'Bryant were the only two players listed on DX's mock draft at the time of the workout (although Chad Ford had McAdoo and Fair getting picked), so it seemed that the Nets were angling for players that may fall outside of the draft.

Even though the team doesn't have a pick they will be watching the draft very carefully to watch who doesn't get selected, for the Nets can bring undrafted prospects to Orlando for summer league and potentially training camp.

So, will they get a draft pick?

It doesn't seem likely right now. But what do we know? Very little. Billy King is likely waiting to drop a bomb on us and acquire the number one pick. No, seriously, nothing is set in stone.

King told the media after the draft workouts on Wednesday that he doesn't like the Nets chances of getting into the first round. The Nets' GM did say it was more realistic that they can acquire a second-round pick. As for trade options, Marcus Thornton is an attractive piece considering he has an expiring contract worth $8 million. Bojan Bogdanovic has always been an intriguing prospect for teams—the Thunder have shown an interest in him --he scored 19 against them last preseason-- and OKC picks at Nos. 21 and 29—so that's one possibility. And lastly the $2 million they have to use on draft night, the other $1.2 million having been sent to New Orleans in the Tyshawn Taylor trade.

Stefan Bondy of the New York Daily News and Chris Manix of Sports Illustrated both said that the Nets were trying to acquire a first rounder. Mannix mentioned picks 25-30 "can be had for the right price."

Who should the Nets call?

The Suns have three picks in the first round and have already stated that they would try and deal one for a key contributor or a point guard. The Nets may not be the most ideal suitor for them, but the Suns could use a wing and could maybe wait on Bogdanovic. The $2 million wouldn't hurt either. The most likely pick the Nets could acquire is pick 27 or pick 50.  Jerry Zgoda of the Minneapolis Star-Tribune tweeted Wednesday that the Timberwolves will likely sell one of their three picks in the second round.

The Bulls want to move either or both picks they have at Nos. 16 or 19 in order to save cap space so they can sign Carmelo Anthony or trade and extend Kevin Love. So, Thornton's big expiring doesn't work here, but Bogdanovic can work. He won't go against the Bulls cap until he comes over, whenever that may be, and gives Chicago a talented wing to backup Melo, if they acquire the Knick.

We mentioned the Thunder might have an interest in Bogdanovic, so the Nets can give Sam Presti a call about picks at Nos. 21 and 29. There has been zero chatter about the Thornton-Jarrett Jack swap since it was reported over the weekend. The Cavs pick at No. 33 and the Nets could try to acquire the pick in return for taking on two more years of Jack --the second barely guaranteed-- to Thornton's one.

If the Nets get a late first, early second, who should they target?

A defensive-minded wing can do great things for this team. K.J McDaniels isn't likely to be there past 30, and we talked about him here, but the fit can be perfect. He will have time to work on his contested three while giving the Nets fine minutes as a lockdown defender.

Cleanthony Early may hang around early in the second round before getting scooped up. Early was a key cog to Wichita State's incredible run this year as everyone's favorite cinderella. Early is an aggressive wing who can also play with some NBA power forwards. His passion and intensity could work well with some of the Nets more seasoned players. Both Early and McDaniels could give the Nets a defender that can come in and contribute early on off the bench while also getting someone who can shoot the three exceptionally well. Glenn Robinson III is also a candidate to fill this hole on the Nets. Playing behind Paul Pierce could do wonders for his game and mentality.

The point guard crop isn't that deep this year past Marcus Smart, Elfrid Payton, Tyler Ennis and Shabazz Napier, but Spencer Dinwiddie can be a solid backup point guard for the Nets. Dinwiddie can give the Nets the length Shaun Livingston has but with a three-point shot. Dinwiddie might be available up until the early 40's, mainly because he's rehabbing from a torn ACL.  That could be right where the Nets look to acquire a pick. We wrote about the Colorado guard's game and his possible fit with the team in the link above.

Brook Lopez is fragile, Kevin Garnett is on his last legs and Andray Blatche probably won't be back, so the team could use a rim protector. Tavares could be an interesting fit with the team considering he won't be needed much on offense due to the amount of weapons Brooklyn has, but he likely won't be in the NBA next year. Patric Young's stock has been all over the place, anywhere between 30 and 50, but he can be the type of player Reggie Evans was for the Nets. He also is a veteran leader who can fit in nicely with the Nets experienced core.

Here is my final mock draft. With so much talent in this year's core, it is tough to say who will definitely go where, but here is my best shot.

Feel free to chat about in the comments below. 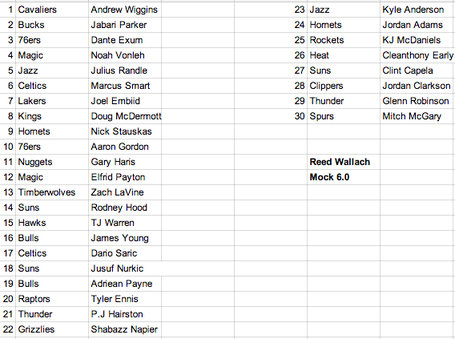 The Nets may not do anything at all Thursday night, or they could do everything, but more likely they will do something in between. Either way, it'll be suspenseful waiting for the WojBomb to be dropped. Happy drafting everyone.