With the draft just one day away and the offseason in full motion, the Nets need some answers with their depth at the five spot.

Share All sharing options for: Decisions, decisions, and more decisions; What's going on with the Nets big man situation?

There are a whole lot of questions that need to be answered heading into the 2014-2015 season for the Nets. Following Andrei Kirilenko’s decision to stay one more year, the Nets have four remaining players that are free agents.

With Brooklyn expecting Kevin Garnett to stay and seeming like they're going to let Andray Blatche walk, the Nets are put in a difficult position with their depth at the five spot. Owning zero draft picks and having very little flexibility, should Garnett and/or Blatche walk, this could be a legitimate problem heading into next season.

And of course with Lopez’s health always a concern, it’s imperative the Nets have the necessary big man arsenal to back him up ... just in case.

Despite breaking his foot during the early stages of the 2013-2014 season, Brook Lopez is expected to be back in the black and white when the season starts. He starts working out next week in Orlando with the Summer League team. Lopez, whose post play would’ve been a major threat for Brooklyn in last season's playoffs, may have to adjust to the ‘small ball’ style Jason Kidd installed after he went out with an injury.

A big part of the adjustments depends on what players are here to stay and how the roster shapes up, starting with the return of Kevin Garnett.

There’s plenty of optimism that KGwill return for his final year on his contract, nothing is guaranteed just yet.  On Wednesday, Billy King reiterated he expects Kevin Garnett to come back next season.  That follows items by Marc Stein and Chris Mannix.  Stein wrote, "Nothing is official yet, but quiet optimism is emanating from Brooklyn when it comes to Kevin Garnett playing for one more season." Even Billy King said that he expects Garnett back.

His positive contributions on the court don’t necessarily revolve around his numbers. His average of six points and six rebounds per game were the lowest of his career, but his leadership skills are undeniable and his veteran experience is crucial to the development of Mason Plumlee.

Plumlee grew as a player this past season. Helped by the likes of Lopez and Garnett, Plumlee was able to build on his game by watching, learning, and when push came to shove, being thrown into the mix once Lopez and Garnett went out with injuries.

Plumlee was selected 22nd overall in 2013 NBA Draft, but finished fourth in Rookie of the Year votes and was also voted on the NBA All-Rookie First Team.

Let’s take a look at his numbers that represent his substantial accomplishments in his first year as a pro: 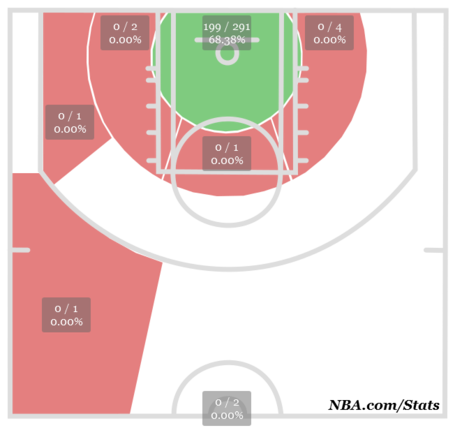 His 68 percent shooting inside the paint goes to show how much of a dominant force he was down low, opposed to his shooting outside of the paint. Despite a small sample size of nine shots to analyze, Plumlee clearly struggled from anywhere outside of the paint, converting on zero of those attempts.

At the pre-draft combine, the seven-footer maxed his vertical out at 36", which is a half-inch higher than what Blake Griffin measured out in at the 2009 pre-draft combine. So, naturally we knew he could evolve into a force under the basket.

He finished with 116 total dunks on the season, which was first among rookies, second among all players in dunks per minute and tenth overall. Thirty-three of the 116 dunks were alley-oops, refreshing to see as a basketball fan, and as a Nets fan, having not seen much of that since the Vince Carter days.

Don’t let the 7.4 points per game average fool you. Plumlee’s minutes were up and down due to the inconsistency of Andray Blatche, who he often backed up at the five. Plumlee scored 10+ points in 19 games on the year, most of which he received more than 20 minutes.

Plumlee of course is still on his rookie contract, which has him signed with the Nets until the 2016-2017 season, where the Nets will decide whether they want to bring him back or not. The question is, will Plumlee be forced to back up Lopez if Blatche doesn’t return?  Could be.

Blatche returning in a Nets uniform is looking more and more unlikely as the off-season grows. There was a report  that Andray Blatche and the New Orleans Pelicans have mutual interest. Not long after the rumor showed up, Blatche decided to opt out of his contact, enabling him to become a free agent. Then, the Pelican rumor was denied Of course, there’s always the possibility that the Nets don’t want him back.

Blatche even posted a picture on his Instagram of him in a Nets uniform with a caption that makes you wonder:

Blatche averaged a total of 10.7 points per game in his two seasons as a Net. Despite his inconsistency and lack of reliability, the Nets could be losing a key asset off the bench.

So,  questions continue to linger, and will continue until decisions get made, starting tomorrow night. For now, we play the waiting game and keep our eyes and ears open at this Thursday’s draft to see what else Billy King has planned.