Deron Williams, the Brooklyn Nets' franchise point guard, forgot to show up against the Miami Heat on Thursday night in a pivotal Game 2, where the Nets were looking to even their Eastern Conference SemiFinals series at 1-1.

Williams was held scoreless, on 0-of-9 shooting from the floor with seven rebounds, six assists and two turnovers in 37 minutes. He finished with a +/- of -18. How bad was this performance, in a 94-82 losing effort?

Yup, the first time in 60 games he was held scoreless.

To the Heat's credit, they played fantastic defense on Williams, who tried at times to get to the basket, but for most of the second half Williams was a complete non-factor. There were times where he walked the ball up the court, dumped it off to either Joe Johnson or Marcus Thornton and then took himself out of the play. He was timid, passive and completely out-matched. He was not the franchise player the Nets needed him to be. Not even close.

Deron Williams was scoreless in 36 minutes tonight. 1st time in his entire career (708 games) he played at least 15 minutes yet didn't score

"Every move we've made since we acquired Deron, was made because of Deron." #Nets official to @Ian_OConnor in his last column

In the Nets’ biggest game of the season, Deron Williams was a $100 million dud: http://t.co/H0lKIUfqBO

If Deron Williams can't be convinced to be aggressive now, in this situation, it's clearly just not going to happen. Inexplicable.

4th Quarter: 0-for-3 (missed a jumper in the lane, missed two layups) 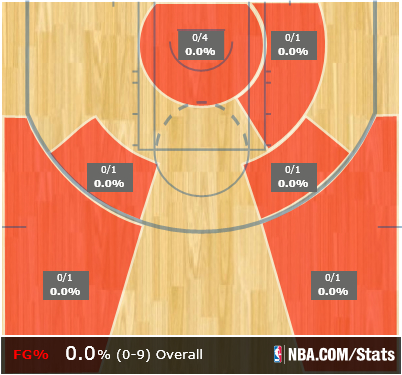 Kidd on Deron: "I thought he had some great looks. He set the tone. He was attacking. We look for him to bounce back in Game 3." #Nets

Kidd on DWill cont: "He had 7 rebounds and 6 assists. We look for him to bounce back in game 3, but overall I thought he was good."

Deron Williams on his performance: "Just couldn't buy a bucket. Didn't get to the FT line either. … I'll definitely be thinking about it."