I don't know why, but when Joe Johnson went to the free throw line late in games this season, the Barclays Center crowd never shouted, "MVP! MVP! MVP!"

Johnson has bought into his role with the Nets. His job is to be a natural scorer and constant threat on the floor, but he would never need to go for 30-point games on a nightly basis. He was never asked to go out and take over games, but he would do it anyway.

After many pundits believed that the Nets would struggle to handle late-game situations with Paul Pierce and Johnson on the floor, it wasn't even a thought late in games, because the ball was going to Joe Cool. In the final 30 seconds of games in the regular season, with the game closer than five points, Johnson took 18 shots (one was a half-court heave), the most of any Nets player, and hit on six of them.

As soft-spoken as he is, and on the same roster as so many outspoken veterans, this was Joe's team. The offense ran through him, the team depended on him to hit the big shot, and he never let the team down. Per SportVu Tracking Data, Johnson had the most touches of any Net, 3,526, besides the team's two point guards, Deron Williams and Shaun Livingston. As Kevin Garnett said, "He's not always there when you call on him, but he is there when you need him."

In the postseason, Johnson's solid season turned into a fantastic one. Johnson scored a career-high 21.2 points per game in the postseason while shooting 53% from the floor, also a career best. Johnson managed to shoot a scorching 41% from beyond the arc, and despite being the Nets top scoring threat, dished out about three assists. Johnson earned his large paycheck in the Toronto and Miami series and at times put Brooklyn on his back.

Johnson saw his scoring numbers dip for the second straight year this season, as he went from averaging 16.3 points per game to 15.8 points. However, that wasn't due to declining talent. Johnson was on the same team as score-first forward Paul Pierce who was expected to handle the scoring load with Brook Lopez before he got injured while also letting Deron Williams get his fair share of shots.

Johnson had one of his most successful scoring seasons from an efficiency standpoint, though, as he had his highest true shooting percentage of his career at 56%. 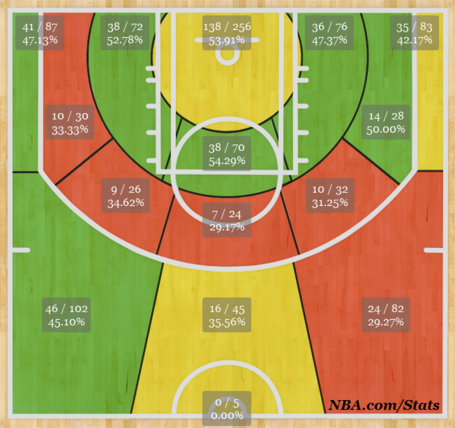 Looks pretty fair to me. When looking at the basic zones in Johnson's shot chart you see a lot of average areas. Johnson, despite the judgment of many analysts, took many shots in between the paint and the three-point line, 24 percent, and thrived there. Johnson shot 41% from mid-range in the above shot chart, but per Basketball Reference, shot 47% on shots between 10-16 feet, his best mark since his second season in Atlanta.

The majority of Johnson's shot came from inside the paint, 26 percent, which was expected from the man who makes a living off of beating his man off the dribble and taking a pretty eight-foot floater. However, he did manage to shed that "Iso-Joe" nickname this year. Per Synergy, Johnson had 261 isolations this season, 18.1 percent of his offense, which was third to post-ups and spot-ups. Johnson fed off the great ball movement from Brooklyn this season and slashing offense and found soft spots in the opposing defense. Johnson also took advantage of his size advantage at shooting guard this season by refining his back-to-the-basket game. His .97 points per possession this season was the 27th best mark for qualified players this season.

Johnson was also much more careful with the ball this season. Despite not playing the role of facilitator often, Johnson did have the offense run through him often. He had a turnover percentage of less than 10 this season, or had nearly 10 turnovers per 100 possessions on the floor, which was his lowest number since the 2009-2010 season.

There were so many big shots that Johnson hit this season that this could get long. But my number one has to be this. The shot that kick started the Nets season.

Johnson is 32 and about to enter the downfall of his career. He is still going to play at a high level and be the Nets rock and consistent scorer, but I see his dip in numbers becoming a trend.

That being said, Johnson needs to become more of a facilitator on the floor. He did it often in the postseason when he received double and sometimes triple teams, but Joe needs to be able to read the floor and get the ball to the open man more often. Johnson has the handle and basketball IQ to be able to run the team's offense at times instead of Deron Williams, but he doesn't take charge enough, which brings me to my next point.

Despite his growing age, Johnson should become the leader of this team. Deron Williams has had his fair share of issues in Brooklyn, which makes it more clear that Joe should be the face of this team. Johnson is soft-spoken, but he has respect around the league, he was selected to be an All-Star this season by the coaches despite many calling for Kyle Lowry to get the nod.

Johnson doesn't need to be a vocal leader and call players out, but he can see touches like he is the best player on the Nets and take some of the light off DWill. It is in the best interest of the team.

Johnson had some fantastic moments throughout this season, but this early season three-point barrage sticks out.

Johnson will likely play his contract out in Brooklyn. Some have said that the Nets should look to trade Johnson while his value is so high following an incredible stretch in the postseason and they can get out of his lengthy contract. But those critics have to realize something: for the Nets to develop continuity and build a system that they are striving to do, they can't make blockbuster trade. Johnson has been the Nets go-to scorer for two seasons now, and since the Nets front office doesn't seem to mind paying his large contract, there is no reason for Joe to be gone.

As said before, Johnson should become the face of the franchise due to his reliability and respect. With a simple game but the ability to play more than one position, Johnson's role in Brooklyn will be interesting.

Past that, the Nets need to keep calling on Joe Jesus, he'll come and help eventually.

Johnson was without a doubt the team's best player.