The Nets and Raptors face off in Game 7

Share All sharing options for: The Nets and Raptors face off in Game 7

The Brooklyn Nets and Toronto Raptors have played each other ten times this season, with each team winning five games. This is the tiebreaker and most importantly, Game Seven of their First Round series. Brooklyn saved their season with a 97-83 victory in Barclays Center on Friday night. The winner heads down to Miami to face the reigning NBA Champions.

Here's how the series has gone:

Deron Williams injured his ankle, but he'll be out there. He had been receiving criticism throughout the series for his poor play in comparison to Kyle Lowry. How bad was it getting? This bad: 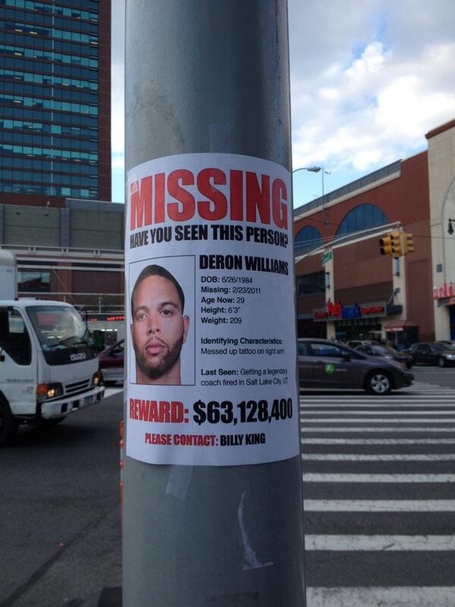 Yikes. Luckily for the Nets, Williams responded with his best game of the season, scoring 23 points on 50 percent shooting and hitting a three pointer late that finally kept the Raptors down. You've heard this before, but Williams needs to be aggressive and constantly driving to the basket if the Nets want to advance to Miami. When Williams is assertive, he adds another dimension to the Brooklyn offense and can help break then out of the occasional dry spell.

Coming into Game Six, there was discussion about the absence of Paul Pierce and Kevin Garnett in the fourth quarter as Brooklyn made their comeback in Game Five. That wasn't the case on Friday night as they were both out there for the fourth. KG ended up playing 26:35, the longest he's played in one game since January. He ended up playing well, and made what I thought was the most important shot of the game, as his elbow jumper helped slow down a potential Raptors comeback. With Garnett playing more minutes, that meant Mason Plumlee was the odd man out in the big man rotation.

One major adjustment Jason Kidd made on Friday was removing Shaun Livingston from the starting lineup and inserting Alan Anderson in his place. Anderson didn't shoot well in Game Six, but does provide more spacing for the Nets offense & that in turn prevents Kyle Lowry from doubling in the low post. Look for Anderson to start again.

The Raps still have the rebounding advantage over Brooklyn in the series, but that has been decreasing over the past couple of games. What's been the cause of this? It could be the decrease in minutes for starting center Jonas Valanciunas. After averaging over 30 minutes in the first three games, he's been in the mid 20s for the last three. Foul trouble has limited his playing time, but when he has managed to stay on the court, he's been excellent. JV has had three double-doubles in this series & was a point and rebound away from his fourth on Friday. The Raptors haven't shot well this series, and when he's in the game, he provides some help on the offensive glass.

Lowry finally had a bad game. After an amazing Game Five, he only went 4-16 from the field as the Nets were able to knock him around and shut him down. He's dealing with a bum knee, but he'll be out there. With Terrence Ross having a mediocre series, Greivis Vasquez will be out there with Lowry for long stretches. That tandem has been successful when they've been on the court, and Vasquez provides great shooting and ball handling ability.

DeRozan hasn't shot well from the floor, but he's made a killing at the free throw line. He's gotten to the line 72 times in this series, converting on 89 percent of them. He's only shot 38 percent from the field, and that's thanks in large part to the Nets forcing him into difficult mid range jumpers. When he's driven to the basket, he's had some success, making 63 percent of his shots inside the restricted area. Anderson & Livingston will be assigned to him and they'll look to keep him stuck on the perimeter.

The matchup to watch is between DeRozan and Joe Johnson. According to NBA.com, Johnson has shot 60 percent from the field when DeRozan is guarding him. The Raps have gone to doubling Johnson as a way to help DD, but with the Nets regaining their three point stroke, double teaming might turn out to be problematic. Johnson has the strength and size advantage over DeRozan and has used that to take advantage of the first time All Star.

We're taking two Game Seven trips today. The first brings us back to the only Game Seven in Raptors history.

And the second takes us back to last spring for the Nets:

This game is the first of two Game Sevens on Sunday afternoon. It'll air at 1 PM on ABC, and if I'm not mistaken, this is the first time the Nets and Raptors have been on ABC this entire season. They would have gotten the 8 PM spot, but Damian Lillard prevented that from happening. Unsurprisingly, WFAN will be airing the oh so important Yankees-Rays game so the game will be airing on WCBS 880 AM for those not near a television. YES Network will have post game coverage once the Yankees wrap up. Home of the Brooklyn Nets huh?