Brooklyn Nets rookie Mason Plumlee was named to the NBA All-Rookie First Team, receiving 95 of a possible 125 first-place votes. Plumlee, who started 22 games for the Nets, was selected 22nd overall in the 2013 NBA Draft. He averaged 7.4 points on 65.9 percent shooting from the floor, 4.0 rebounds, 0.7 steals and 0.8 blocks in 18.2 minutes per game. He also posted an impressive 19.0 Player Efficiency Rating.

From the Nets release:

Mason Plumlee is the first Nets' rookie since Brook Lopez (2008-09) to be named to the All-Rookie First Team, per Nets PR.

Both NBA.com and ESPN.com had Plumlee ranked third overall among all rookies this season, behind only Michael Carter-Williams and Victor Oladipo. 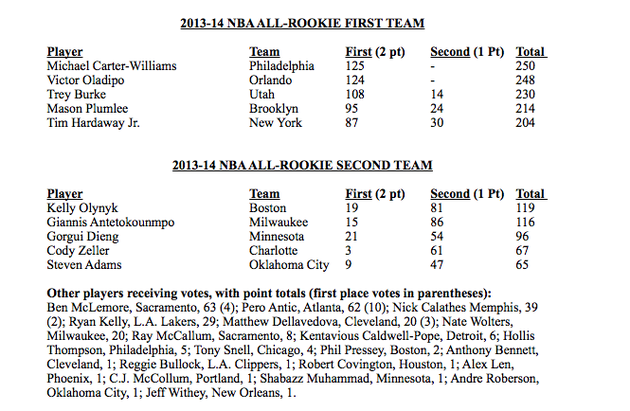