Share All sharing options for: Taking a dive into LeBron James' 49-point performance against the Nets

LeBron James may not have won the MVP this season, but that isn’t stopping him on his quest to win a third-straight NBA championship, taking down anybody that gets in his way. Heading into Game Four, LeBron was averaging 24 points per game in this series against the Nets. Meanwhile, Jason Kidd has thrown many different looks at LeBron with coverage from Shaun Livingston, Joe Johnson, Alan Anderson, Paul Pierce, and Andrei Kirilenko.

Heading into Monday night, Pierce asked Jason Kidd for the defensive assignment on James. That didn’t bode so well, as LeBron went off for 49 points on 16-24 shooting (66%) from the floor 14-of-19 shooting from the free-throw line.

Take a look at his shot chart for the night: 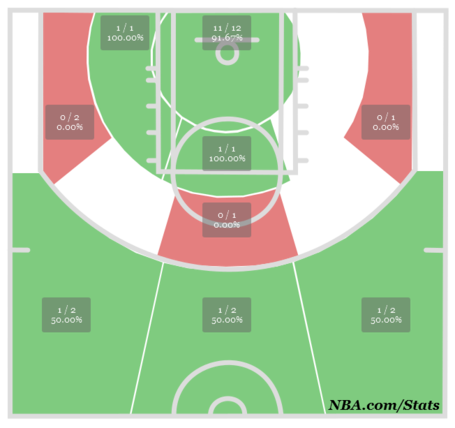 The Nets clearly struggled to defend the interior, as 22 of his 49 points, on 11-of-12 shooting, came from inside the paint. The Heat in total were 20-28 (71%) from inside the restricted area. Of course, while he was torching them from the inside, he was also 3-of-6 from beyond the arc and 14-of-19 at the free-throw line. No answers at all.

It only gets better for LeBron and the Heat. His true shooting percentage was through the roof at 75 percent, while he posted an offensive efficiency rating of 121.7 points per 100 possessions.

After the game, Joe Johnson tipped his cap to LeBron, as he noted that the team did "a nice job of limiting the other guys," noting that the Nets gave up too many layups and points in the paint.

LeBron James told the media after the game, for as easy as his performance looked, he didn't feel like it was easy at all.

"I was just happy I was able to make enough plays to help our team win," he said. "That's all that matters." He went on to say, "It definitely wasn't that easy...May look that way, but that's hard work and dedication from all our guys. We put in great effort to get this game."

And finally, to add insult to injury, James had six rebounds (all offensive), two assists, three steals, and one block. The only way the Nets had a chance at ‘stopping’ him, was attacking him in hopes that he wouldn't be "as aggressive," trying to get him to commit his sixth foul, which didn’t happen.

Erik Spoelstra may have put it best, after the game, when describing LeBron.

The Nets know what they have to do in Game 5 in order to win, and it's mostly execution and effort. They need to put LeBron's 49-point Game 4 performance behind them and focus on moving forward and getting a win in Miami on Wednesday.