Behind a 30 point outburst from DeMar DeRozan the Nets fell to the Raptors, 100-95. The Raptors scored 36 fourth quarter points, dominating the tough defense from Brooklyn. The series is now headed back to Brooklyn tied, 1-1.

Share All sharing options for: Raptors tie series at one apiece with 100-95 win over Nets

The Brooklyn Nets are feeling good after a 94-87 win Saturday, a matinee affair that contained no shortage of drama. The win is crucial because the Raptors now lose their home court advantage, with Brooklyn stealing one on the road. Still, the Nets looked to take complete control on the Raptors and head back to Brooklyn with a 2-0 series lead.

However, they failed to do so, thanks to a huge night from DeMar DeRozan, who finished with 30 points. He anchored the Raptors to a 100-95 victory, and as a result, the series is tied 1-1. The Nets struggled all night on the boards, finishing on the wrong side of a 50-32 rebound advantage. Also, the Raptors outscored Brooklyn 36-29 in the fourth quarter.

After the game, Paul Pierce called the Nets "soft"

"[That’s] frustrating, especially when you have an opportunity [to win]. That is where the game is won — in the trenches. We can’t give up [19] offensive rebounds, especially. That is tough to overcome."

And continuing Toronto's newly found love of profanity, the Toronto Sun gave us this Wednesday morning. 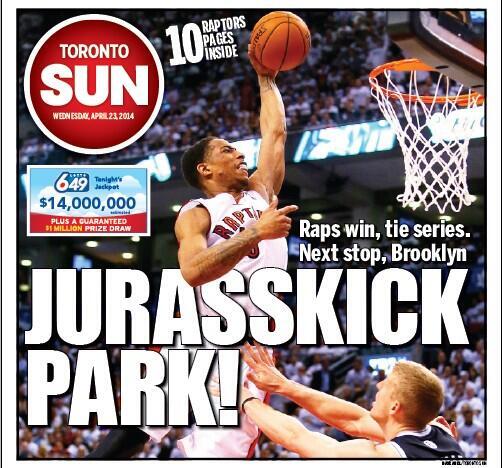 The Nets jumped out to this game on a 8-1 run, behind an aggressive offensive approach from Joe Johnson & Kevin Garnett. Johnson, who scored 24 points in game one, is an obvious matchup problem for the Raptors. Just four minutes into the quarter, Paul Pierce picked up his second foul, being forced to sit earlier than usual. This was the turning point in quarter.

The Nets went on to miss 10 out of their next 11 shots, which led to a 15-3 Raptors run. Deron Williams, who had a big game Saturday afternoon, was just 1-6 from the field, finishing the first quarter with four points. Compared to the Raptors 44% shooting, the Nets were just 37% from the field.

Jonas Valanciunas got off to another great start. He finished the quarter with eight points and four rebounds. His size down low was a worry for the Nets coming into this series. Both games, he's gotten the Raptors into a rhythm early.

In the second quarter, the Nets second unit got off to another poor start. The Raptors had a 9-3 scoring advantage through the first four minutes, which led to Andrei Kirilenko checking in for the first time in the playoffs.

Among the six bench players that received time for Brooklyn, Mirza Teletovic stepped up to the plate. He was hot in the 13 minutes he played, scoring 11 points on 4-7 shooting. He was 3-5 from three, being the only Net player to convert on a three. Other than Teletovic, the Nets offense struggled to gain any momentum. They finished the half shooting 37%, and shot a combined 0-10 from three (excluding Teletovic). They were outscored 24-20 in the quarter.

One of the few reasons the Nets stayed somewhat close in the first half: defensive intensity. They grabbed eight steals and forced eleven first half turnovers from Toronto. In Saturday's victory, the Nets forced 19 Toronto turnovers.

DeMar DeRozan, who shot 3-13 in game one, finished the half leading scorers with 11 points. Surprisingly, Kyle Lowry was held to just two points on 0-5 shooting.

For Brooklyn, Teletovic led the way with his 11 points, followed by Kevin Garnett who chipped in seven points in eight minutes of action. Deron Williams scored seven points, but shot just 2-9 from the field. If the Nets expect to win these games, they need Williams to step up.

Following a disappointing first half, the Nets jumped out to a great start in the third quarter. Through the midway point of the quarter, they had a 17-8 scoring advantage, which led to a 56-53 lead. It was their first lead since they were up 11-10 in the first quarter.

A key factor in this game was the foul trouble of Paul Pierce. He picked up his fourth foul in the third quarter, sending him to the bench yet again. Joe Johnson, who scored just four points in the first half, was emerging as a legitimate threat for Brooklyn. He was a matchup nightmare for Toronto's defense, due to his size over defenders. He was completely carrying the Nets offense, finishing the quarter with 16 total points, 12 of them coming in the third.

The Nets owned the third quarter, outscoring Toronto by eight points, and leading 66-64 heading into the fourth quarter.

Quick reminder: Through the first three quarters, the Raptors out rebounded the Nets, 42-23.

The backup units of both teams exchanged buckets back and forth during the early stages of the fourth. Shaun Livingston carried the way for the bench. He had 12 points in 25 minutes of action, and similar to Saturday's game, he lifted the bench with buckets during crucial times. Still, the Nets couldn't grab a rebound with Kevin Garnett on the bench. It was completely killing their defensive momentum

DeMar DeRozan continued to play well, but picked up his fifth foul within the first few minutes of the quarter. It was huge for the Nets to have him off the court.

With four minutes remaining, the Raptors were up 83-80, and owned possession. After a missed shot, that looked to be another offensive rebound for Toronto, Andrei Kirilenko risked his body to dive on the floor for the ball. Following that incredible play from Kirilenko, Paul Pierce hit an and-one, his first field goal of the game. The game was tied at 83-83.

As time dwindled, the duo of DeMar DeRozan & Kyle Lowry put the Raptors on their back. The score was 91-87, in favor of the Raptors, when Deron Williams tried to force a pass to Joe Johnson in the post. Landry Fields, who was assigned to stick on Johnson, came up with a huge deflection that led to a pair of free throws the other end. The Raptors hit one of two, which was then followed up by an and-one foul conversion from Paul Pierce. The score was 92-90 with one minute remaining. The Nets weren't giving up just yet.

The Nets forced a turnover from DeRozan on the next possession, but Paul Pierce failed to convert on an open three. With only 16 seconds remaining and a four point lead, all the Raptors needed to do was hit free throws, and this game was theirs.

The Raptors out rebounded the Nets 50-32, while the Nets struggled once again to convert on their shots. They shot 7-24 from three point, and couldn't come up with necessary stops to win this game. Despite 21 turnovers, Toronto scored 36 points in the fourth quarter to anchor them to this victory.

Joe Johnson led all Nets scorers with 16 points, followed by 14 points from Mirza Teletovic, and 13 point from Kevin Garnett. Deron Williams chipped in 15 points, but had a poor shooting night, finishing just 5-15.

After really struggling in game one, DeMar DeRozan had a huge game. He scored 30 points, 17 of them coming in the fourth quarter. Jonas Valanciunas notched another huge game with 15 points and 14 rebounds. Kyle Lowry, Amir Johnson, Patrick Patterson, and Greivis Vasquez were all in double figures as well.

After the game, Garnett jabbed at Masai Ujiri a bit with this comment:

"I don't know if you can say "F Brooklyn" and then come into Brooklyn, so we're about to see what it's like," Kevin Garnett said.

Game 3 will be this Friday night in Brooklyn.

For more on the Toronto Raptors, check them out at Raptors HQ.