Nets vs. Raptors Preview: 'Hip-Hop on the Hardwood: Jay-Z vs. Drake'

Our friends over at Daily Beat take a look at the real matchup between the Nets and Raptors, heading into the Playoffs, with 'Hip-Hop on the Hardwood: Jay-Z vs. Drake.' Written by Maxwell Dartey with contributions by Chris Lavinio.

Share All sharing options for: Nets vs. Raptors Preview: 'Hip-Hop on the Hardwood: Jay-Z vs. Drake'

The NBA regular season has come to a close, which can only mean one thing: the playoffs are nigh. This year’s playoffs are full of storylines, and everybody loves a good storyline. Can the Miami Heat three-peat? Will Kevin Durant claim his spot as the NBA’s top dog? Will Dwight Howard defy the haters? Can the Pacers live up to the hype? Will the Clippers stake their claim as LA’s team? While there’s plenty for basketball fans to be excited about, hip-hop fans can look to the upcoming match-up between the Toronto Raptors and the Brooklyn Nets that puts Toronto’s Drake against Brooklyn’s own Jay-Z.

A few months ago, the Toronto Raptors made Drake their "global ambassador." The timing couldn’t have been more perfect because the Raptors are playoff-bound for the first time in six years. They truly embodied "Started From The Bottom." Since his appointment, Drake had become increasingly more visible within the sports world. In fact, he was recently announced as the next host of the ESPY’s. One the other side of the court you have Jay-Z. Even though he sold his stake of the Brooklyn Nets, he is still very much the public face of the franchise. His celebrity was a major factor in the team’s move from New Jersey to his native Brooklyn and he christened the Barclays Center with a concert. Now Hov has his own sports agency that represents the likes of Kevin Durant, Robinson Cano and CC Sabathia. 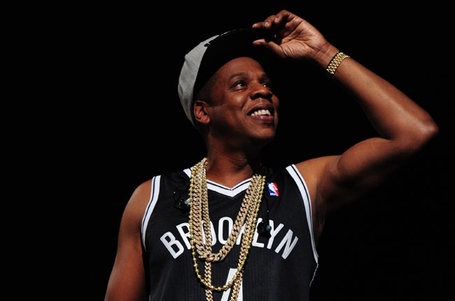 What makes this story particularly interesting is the parallels between Jay-Z, Drake, and their respective teams. While the Raptors have excited their fan base, many basketball analysts question whether or not they are simply a flash in the pan. Drake is one of the biggest stars in the current hip-hop scene, but he has yet to win over hip-hop purists. The Raptors don’t have any big-name players on their squad, but they do have a solid core of young, hungry players led by DeMar DeRozan and Kyle Lowry. Five years ago, Drake and the Young Money crew were in a similar situation, but now they’ve risen to the top as the Raptors hope to do. Jay-Z’s net worth has gone up over the past ten years, but this has been at the expense of the quality of his music. The Nets have the NBA’s highest payroll and two of their stars, Paul Pierce and Kevin Garnett, are in the twilights of their careers with many wondering if they have anything left in the tank. But say what you will about Jay-Z, he knows how to control the spotlight and bring some of the biggest names in music to collaborated with him. Nets owner Mikhail Prokhorov has adopted this same mentality. In addition to having one of the NBA’s best point guards in Deron Williams, the Nets acquired the championship experience of Paul Pierce and Kevin Garnett. They signed Brook Lopez to a fat contract and hired NBA legend Jason Kidd to coach the team. Whether they were winning or losing, there was no shortage of media coverage of the Brooklyn Nets.

This is a classic old-school vs. new-school match-up with Jay-Z and the Nets being the old guard trying to prove they still got it up against Drake and the Raptors, the young bloods proving that they are for real. Who will prevail? I guess we’ll have to tune-in and watch.