Four straight. The Nets were able to overcome a seven point fourth quarter deficit and held on to beat Dallas Mavericks 107-104 in overtime. Brooklyn also got some assistance from Denver, who beat the sixth seeded Wizards at home on Sunday afternoon. Unfortunately for the Nets, Atlanta couldn't get the job done in Toronto on Sunday afternoon. At 37-31, the Nets are one game behind Chicago for the fourth seed and 1.5 games behind Toronto for the Atlantic Division lead.

The second opponent on this three game trip will be the New Orleans Pelicans. I don't think there were many (any?) people out there picking the Pelicans to make the playoffs, but it's been a disappointing season nonetheless. Injuries and poor play have hindered NOLA all year and they find themselves waiting til next year. On the bright side, they have won back-to-back games, including a win over Miami on Saturday night.

This is the second and final meeting between the clubs this season. Back in February the teams met in Barclays Center and Brooklyn came away with a 93-81 win.

What's up with these teams? Let's check it out:

We can add Andrei Kirilenko to the injury list. Kirilenko sprained his ankle against Dallas and didn't return. No word on his status as of this writing. Kevin Garnett's still dealing with a bad back.

That Marcus Thornton acquisition is looking better and better for the Nets. Thornton scored 20 points off the bench and set the tone for the Nets' comeback by hitting two three pointers to open the fourth quarter. We were told that he's a streaky player that isn't a particularly good defender. The Nets are worse defensively with him on the court, but that was expected. More importantly, he has a true shooting percentage of 59.2 since joining the Nets and figures to keep up the success on the offensive end as the Nets get closer to the playoffs.

Joe Johnson has carried the offense the last two games. Johnson made eight three pointers in those games and as we've come to expect, he made key plays down the stretch that led to victory. Luke Babbit and Austin Rivers aren't the greatest offensive players, so Johnson (and Deron Williams for that matter) have major advantages at their positions. Old friend Anthony Morrow is someone to keep an eye on, especially from behind the arc.

If any team can relate to Brooklyn's injury woes this season, it's New Orleans. Injuries to All Star caliber players such as Ryan Anderson and Jrue Holliday have short-circuited their season. Wing man Eric Gordon missed NOLA's last game due to knee tendinitis and is day-to-day.

The Pelicans figure to make some changes this off-season. With questions about who to possibly trade, draft, and sign, the Pelicans have a busy summer awaiting them. They might also be looking to change coaches. Earlier this month, The Bird Writes editor Oleh Kosel took a deep look at NOLA head coach Monty Williams and concluded:

Some coaches have a particular system and they require the right bodies; otherwise you've got square pegs being shoved through round holes. Monty Williams has some fine principles and we've certainly seen them work largely in the past. Yet, with what has materialized this season, I feel it'd be in the best interests of the organization to just move on. There is a mountain of evidence against Monty ever being able to fix all the flaws and this piece didn't even delve into Monty's in-game adjustments, time-out management or the lack of emphasizing strategies such as a 2 for 1 to finish quarters.

Anthony Davis is incredible. Davis has built on his successful rookie season and earned himself a spot in All Star Game. His performance has increased across the board and he's averaging 21.7 points, 10.4 rebounds and 2.4 blocks a game in 36 minutes a night. To top it off, he's ranked in the Top Five in Win Shares and PER. The scariest thing about Davis? He still has room to improve. Looking at this contest, Mason Plumlee is gonna have his hands full dealing with Davis. Plumlee is coming off his first bad game of March as he was outplayed by Dallas' Samuel Dalembert. Plumlee had a great game against NOLA in the first meeting and hopes to do it again. As for Davis, with the Nets compromised on the glass, he should control the boards for the Pelicans. He's also one of the league's best shot blockers and that figures to keep Brooklyn on the perimeter more so than usual.

Brought in to provide some punch off the bench, Evans has struggled for a large part of the season. On the whole, Evans is averaging 13.6 points, 4.6 rebounds and 4.7 assists on a true shooting percentage of 49.9 in 27 minutes a night this season. A true shooting percentage that low is problematic on its own, but it becomes even more problematic when you take into account the fact that he leads the team in usage rate. He's never been a particularly great shooter, and this season 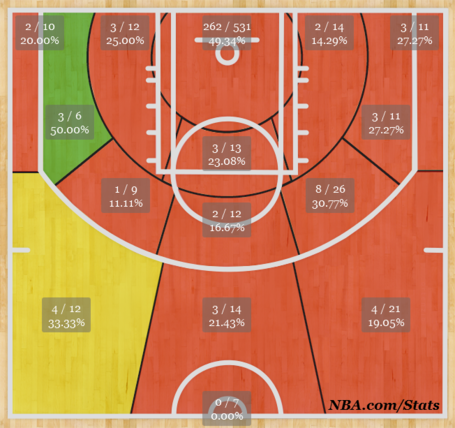 has been more of the same. Despite those overall struggles, Evans has had a marvelous March. He's averaged 21.5 points, 6.1 assists and 5.5 rebounds on a true shooting percentage of 62.5 in 37.5 minutes a night this month. He's taken the majority of his field goal attempts inside of the restricted area where he's shooting 62.6 percent this month. He's also getting to the free throw line six times a night, banking on about 85 percent of those attempts.

Shaun Livingston will be tasked with disrupting Evans. Although Evans is shooting 46 percent from the midrange area and 37 percent from three point range this month, he's still a poor jump shooter. With that in mind, Livingston and the Net defenders figure to play off of him in the hopes of keeping him on the perimeter. If Evans does look to drive to the rim, Livingston is just as quick and athletic to make it tough on the former Sacramento King. Evans has about 40 pounds on Livingston so that should work in his favor.

On the defensive side, Evans figures to match up with Joe Johnson. Evans certainly has the skills to be a good defender, but it hasn't shown in the results this year. NOLA is allowing close to 109 points per 100 possessions with him on the court while allowing teams to get to the free throw line more often compared to with him on the bench. Johnson has been great over the last two games and that figures to continue here as well. Johnson has a slight size advantage over Evans and that should benefit him if he moves down into the post. However, Johnson has been at his best from behind the three point line (40.8 from deep, second highest of his career) so look for him to stay on the perimeter for most of the night.

Jump back to 2011 and watch Chris Paul do his thing against the Lakers in the First Round of the Playoffs.