Everyone meet the newest Brooklyn Net, Marcus Thornton. Thornton is a 26-year-old gunner who has played with both the Sacramento Kings and New Orleans Hornets (when they were around) before being traded to Brooklyn.

In New Orleans, Thornton was a reserve guard who started some games. But when he was initially traded to Sacramento, he broke out of his shell. Thornton played 38 minutes per game in Sacramento in his first half-season, and scored 21 points per game. Thornton played 31 minutes per game in his second season and kept up fine numbers, scoring 18 points per game despite shooting 43% from the floor. The past two seasons, Thornton's minutes dropped into the low-20's and became a bench player with a big contract on a poor team.

Now, Thornton has a year-and-a-half left on his four-year, $31.5-million deal. Next year, he becomes an expiring deal worth $8.5 million which can be an intriguing trade asset come next year. But let's take a look at what he can bring to Brooklyn right now.

I spoke with Greg Wissinger, editor of Sactown Royalty, about some of Thornton's strengths and weaknesses. "When he gets hot, Marcus Thornton is an incredible shooter," Wissinger said. "He's capable of massive scoring outbursts, and can bomb away from behind the arc." Problem is that this season Thornton has not showed efficiency when shooting. Take a look at his shot chart. 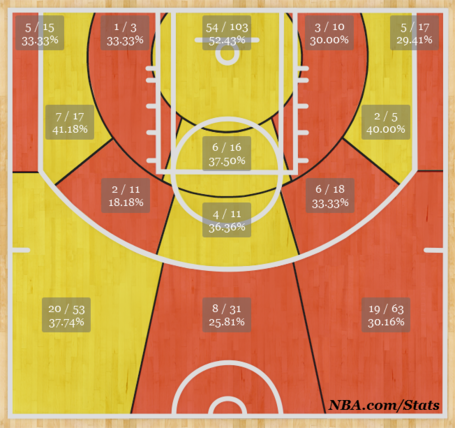 Thornton loves to shoot, but he needs to understand that his shot isn't falling consistently enough to garner that many looks. Thornton's shooting is mediocre at best in all but one of the five zones beyond the arc this season. That being said, Thornton did recently go off against the Indiana Pacers, scoring 42 on the best defense in all of basketball, tying a career high. He shot 7-of-15 from beyond the arc in that game. Thornton just needs to find his shot, and he needs to find it quick. Wissinger notes that scoring the ball is "his value in the NBA."

As for weaknesses, clearly right now it's finding his shot on a nightly basis; but really, it's playing defense. "When Thornton isn't shooting well, his value pretty much disappears," Wissinger said. "He's not a good defender, and it's not for a lack of effort. He tries, he's just bad at it."

In Zach Lowe's column on Tuesday, he noted how bad Thornton is on defense.

"His shooting has been a disaster this season, and he has never improved as a defender. He still gets lost away from the ball, and he's always spacing out or ball-watching as his man cuts behind him. He has never shown any organized commitment to team defense or help schemes. He's just not a useful NBA player right now."

Thornton isn't going to do much to help the Nets defensively when Kevin Garnett comes out, but he can help energize the recently slacking bench. Alan Anderson's production has dropped off as of late, scoring fewer than seven points over his last ten on 39% shooting; Thornton could take some of Anderson's rotational minutes and Jason Kidd could see if he can provide some instant offense. About a quarter of Thornton's offensive plays come on spot-ups, which is much lower than Anderson, who spots up on 43% of his offensive plays. So, Thornton could even give the Nets a more varied offense.

What can help Thornton the most is the change of scenery. Wissinger thinks that he can't be a role player. He does add that, "Perhaps that will change in Brooklyn, as he'd be deferring to bona fide stars instead of fellow flawed Kings." Maybe all he needs is a change of scenery. Maybe Thornton needs to be in a winning culture and around veterans who have won before.

The Nets aren't expecting Thornton to go for 20+ points every night. They are expecting a 26-year-old to come in for two aging veterans and be more efficient when he's on the court. If Thornton doesn't pan out, then he gets to sit where Jason Terry was last week. If he finds his rhythm, than maybe he works his way into the rotation and gives the Nets a much needed spark of offense off the bench. The Nets were definitely winners in this trade.

Thanks to Greg for his take on Thornton!