Tonight's game against the Brooklyn Nets and Miami Heat will feature the release of the "nickname jerseys" for both teams. We already know what the "main" players are going to wear. 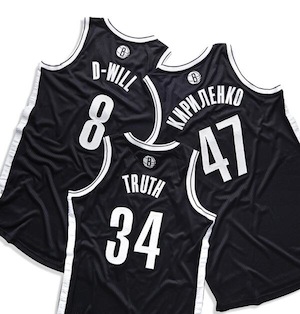 Reggie Evans will be wearing "The Joker," Shaun Livingston will wear "S.Dot", Kevin Garnett "The Big Ticket", while rookie Mason Plumlee will wear "Plums." Tyshawn Taylor released his nickname on gameday, and will wear "@teey_y."

In case you're wondering, no, apparently that's not his Twitter handle, as I learned.

@TomLorenzo It's his Instagram handle... So, I guess he hopes people figure that out? Very confusing...

Social media, for the win!

Here's the full list ... our favorite? It's close between AK-47's Cyrillic spelling of Kirilenko or Tokomotiv.