The Nets try to beat LeBron and the Heat again

And also push the winning streak to five.

Share All sharing options for: The Nets try to beat LeBron and the Heat again

Four straight. Brooklyn fell behind by as much as 16 points in the first quarter but were able to come from behind and put an end to Golden State's 10 game winning streak with a 102-98 win on Wednesday night. Despite their 14-21 record, the Nets now occupy the eighth seed in the Eastern Conference and somehow, someway, they can climb higher in the standings. This is the first night of a back-to-back that will take them to Toronto on Saturday night before they head off to London to play the Hawks.

Coming into the Barclays Center this Friday night will be the defending NBA Champion Miami Heat. Going into the season, Miami was considered the favorite to make it out of the East, and so far they haven't disappointed. The Heat are once again near the top of the Eastern Conference and are within striking distance of the Pacers for the best record in the league. The Heat are also on night two of a unique back to back. They played at the Garden on Thursday night and are on night two of a six game road trip that will carry them to Washington, Philadelphia, Charlotte and Atlanta. This is also a rematch of Brooklyn's home opener, a game that the Nets won 101-100. Miami is coming off a sloppy loss to the Knicks so they'll be up for this contest. And lastly, the players are going to be wearing their nicknames on the back of their jerseys for this one. Meh.

What's going on with these teams? Let's hit the numbers:

Deron Williams isn't irreparably hurt, but he won't be here for this one. With Williams out of action, the tandem of Shaun Livingston & Alan Anderson will take his place. While Stephen Curry did score 34 points, he did have to take 25 field goals (plus 10 free throws) to get there. He also committed seven turnovers and had to work on defense dealing with Livingston on defense as well. Anderson isn't much of a scorer, but the Nets don't need him to do much on offense outside of hitting the occasional three pointer. They'll more than likely spend their Friday night guarding Wade & LeBron.

Joe Johnson and Paul Pierce figure to be the focal points of the offense tonight. Johnson is coming off a pretty great game, scoring 25 points, doing most of his damage on the inside (8 points) and getting to the free throw line eleven times. Paul Pierce was starting to settle into the sixth man role but has been pressed back into the starting lineup with Williams gone. Wade and James will more than likely spend their time defending this duo so I'd look for them to be even more active in the low post in the hopes of getting Miami's duo into foul trouble.

He's had a poor season on the whole, but Kevin Garnett deserves a ton of credit for his play against the Warriors. He had a tremendous fourth quarter and made key plays down the stretch. I've sent many criticisms his way, but he deserves credit when he plays excellently (Romy has more here). Assisting Garnett in the frontcourt will be Mirza Teletovic & Andray Blatche. While Teletovic is looking for a nickname (did I tell you how silly I think this is?), he'll hope to continue playing at the high level he has been when he's touched the court. He had a pretty solid game against the Dubs on Wednesday night, hitting two three pointers and grabbing eight rebounds. His ability to space the floor will be critical if the Nets want to pull off the upset. As for Blatche, he's hit or miss depending on the day. When he played the Heat back in November, he had a decent game, scoring nine points and grabbing six rebounds. He has a tendency to fall in love with jump shots so Jason Kidd would be wise to tell Blatche to keep it in the post.

Shane Battier and Mario Chalmers missed Thursday's game in MSG due to injury and might not play in this one.

This is night two of a back to back, and for the most part Dwyane Wade hasn't taken part in them. He did play in Miami's last back-to-back set and played well. If Wade does play, he'll look to drive to the basket at every turn. He's slowed down compared to his earlier years (as you'll see in a bit), but he still drives to the basket around seven times a game. Despite that, he's only averaging 4.7 free throws per game, a career low. This low is perhaps the result of Wade playing fewer minutes and not being as active (relatively speaking) as previous years. This decrease in activity hasn't limited his effectiveness. In 33 minutes a night, Wade is shooting a career high 53.8 percent from the field, thanks in large part to his 67.5 field goal percentage inside the restricted area. Not to be undone, he still gets you five rebounds and five assists a night as well.

If Wade doesn't play, Ray Allen will take his place in the lineup. I didn't know this, but Allen has been dealing with a knee injury this season. It looks as if it's affected his three point shooting, as he's only shooting 36.1 percent from deep, the second worst mark of his career (although that's relative to him. 36 percent is pretty respectable from deep). Despite that, he's still having a solid year and figures to be a factor in this one.

One of the big problems for Brooklyn this season has been their three point defense. As of this writing, the Nets are second worst in three point defense, allowing teams to hit on 39 percent of their attempts. They've been much better the last two games, holding Atlanta to only 33 percent (on 24 attempts) and #3 Golden State to 34 percent. The Heat will pose a great challenge to Brooklyn's three point defense. The Heat are top five in three point efficiency and love the corners (#1 in attempts and shooting percentage). In addition to Ray Allen, Norris Cole, Rashard Lewis, Michael Beasley & even LeBron (more on him in a bit) can hurt you from deep.

When they're serious on their game, the Heat are absolutely ferocious on defense. They're top ten in defensive efficiency, but are at their best when they're forcing turnovers. They lead the league in forcing turnovers, and when they're out on the break, you can guarantee how it's going to end. The Heat love to attack pick and rolls, so Brooklyn will have to be mindful of that. Where Brooklyn can make Miami's aggressiveness backfire is from behind the arc. Teams are hitting on about 37 percent of their three point attempts, which ranks in the bottom five in the Association.

He's still the best in the league. As expected, LeBron has been his usual hyper efficient self this season. He's averaging over 25 points a game with seven boards and seven assists along with it. He's got a True Shooting percentage of 67.1 percent, good for best in the league behind Kyle Korver (even more impressive is he's this efficient while handling the ball as often as he does), and a large part of that is due to his improved three point shooting. He used to take a ton of threes back in the day, but was never particularly good at it. He's improved his shooting each of the previous two seasons and is now shooting 40.5 percent from deep. Another key factor to his super efficiency is shot location. Back in the day, he took too many jumpers and didn't spend enough time in the post. These days: 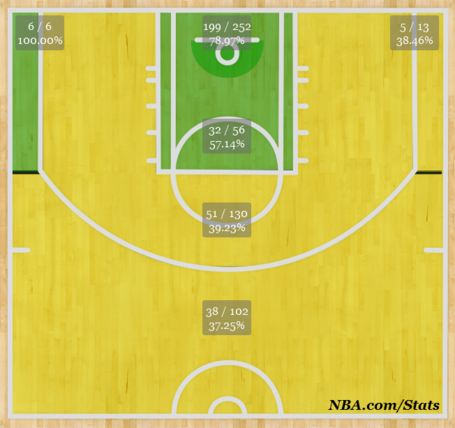 You can clearly see the difference in style. He's refined his game and has spent much more time in the post than in previous seasons. One thing that is different compared to previous seasons is the turnover rate. He's been committing the most turnovers in his career, but as an outsider, I would attribute that to not being in the best of shape (relatively speaking of course) at the start of the year and dealing with some nagging injuries this year.

One thing that's also changed for LeBron these past couple of years has been the level of shade he gets. During Year One of the Miami experience, practically everyone (Net fans included) outside of Miami despised LeBron. However, time and team success has changed that. Back in the preseason, Tom Ziller walked us through LeBron's timeline and wrote:

It's not just the rings, but the individual dominance in capturing the gold. He still has detractors, but the venom these days is less bitter and more rare. And given that LeBron has proved the narratives about his guts, his heart, his brain to be nonsense, the worst critiques are easily dismissed.

Everybody loves him again.

No Deron Williams means LeBron will be dealing with Pierce and Johnson for most of the night. He definitely has the speed to keep up with anybody on the perimeter and his 6-8, 240 frame is more than capable of defending any player in the post. On the other side, Andrei Kirilenko will have his hands full covering James. Jason Kidd said he's on a minute restriction, and I'm guessing Kidd will manage his minutes so that Kirilenko is on the court late in the fourth if the game is close. Alan Anderson will also get turns dealing with James, so look for James to camp out in the low post. When the Nets double (and they will/should), Miami's three point shooters will look to make Brooklyn pay. Communication has been key (for good and for ill) for the Nets so their rotations will have to be sharp. If they aren't, it's gonna be a rough night.

Head on back to 2006 and catch Dwyane Wade in action against Jason Kidd and the Nets.