Jason Kidd will be the Nets new head coach.

Marc Stein first reported the news, saying Kidd has convinced Mikhail Prokhorov and his advisers to hire him as the Nets head coach. Peter Vecsey quickly tweeted that the Nets had informed Brian Shaw that they have chosen Kidd.

In what can only be described as a bold move, the Nets decided on Kidd despite the risks associated with giving a player, even as one as great as Kidd, the run of their franchise without the benefit of any coaching experience.

The Nets understood those risks, but team insiders pointed out that there are risks for Kidd as well. The Nets have shown a willingness to give coaches the hook and note he left $6 million on the table when he retired from the Knicks. Moreover, they point to the recent example of Mark Jackson who aided by experienced assistants and a supportive ownership, turned that franchise around.

Within minutes of the official announcement, Deron Williams became the first Nets player to congratulate Kidd on his hiring.

By 9 p.m., the Nets official website had posted this and the planning for Thursday had begun. 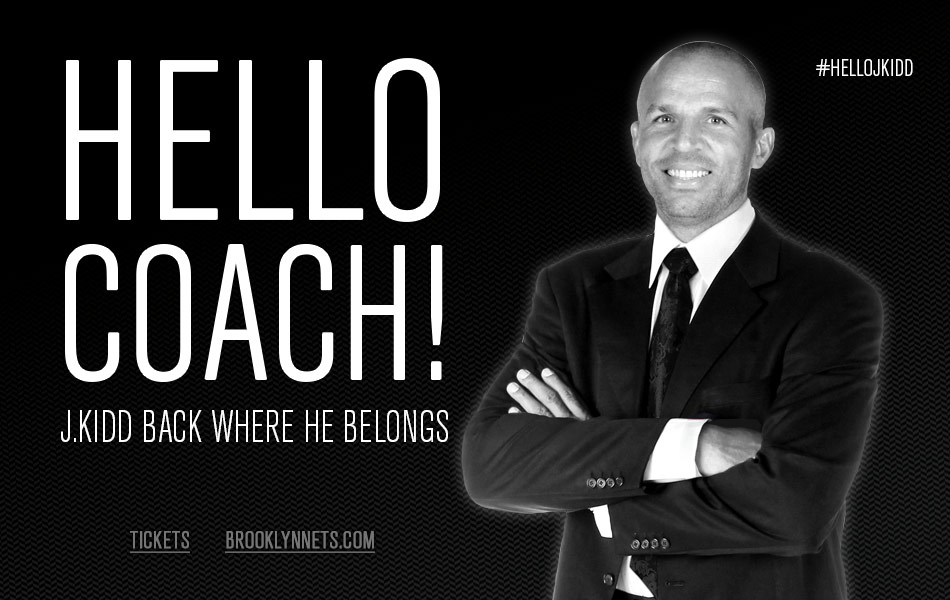 A press conference was called for 2 p.m. Thursday. at Barclays Center. YES announced it will cover it live from the arena.

There were varied reports of who would join him on the bench, that at least one and possibly two former head coaches will join Kidd on the bench. Lawrence Frank has been rumored as the most likely assistant and another former Nets head coach, Dave Wohl, now an ESPN commentator, is also in the mix for Kidd's coaching staff. Other names that have been mentioned are: Tim Grgurich, the veteran skills coach, and Alvin Gentry, the former head coach at Phoenix ... although Gentry is being interviewed this week for the Grizzlies opening.

In the official announcement of his hiring, Kidd said, "This is a tremendous opportunity to be named head coach of the Brooklyn Nets, and it’s a role I have been studying for over the course of my playing days,” said Kidd. “Championship teams are built on being prepared, playing unselfishly and being held accountable, and that’s how I expect to coach this basketball team. I am truly excited about this next phase of my basketball career.”

Prokhorov said the hiring completes a circle for the Nets' great.

“Jason Kidd has a long and legendary history with the Nets and with the city of New York," said Prokhorov. "He has the fire in the belly we need, and has achieved as a player everything the Brooklyn Nets are striving to achieve. We believe he will lead us there. Welcome home, Jason.”

And the man in charge of the hiring, talked about what Kidd brings.

"I am very pleased to welcome Jason Kidd as the head coach of the Brooklyn Nets,” said King. “Jason is a proven winner and leader with an incredible wealth of basketball knowledge and experience. This will be a natural transition for him to move into the role of head coach, as he embodies the tough, smart and team-first mentality that we are trying to establish in Brooklyn."

Kidd may be inexperienced as a coach, but when sits on the bench for the first time in October, he will have added another milestones to an already long list. At 1,391 games, he will have played in more NBA games than any other coach in history. He will also be the first NBA player to go directly into the coaching ranks since Mike Dunleavy did in 1991.

The news comes a little more than a month after King began his search for P.J. Carlesimo's replacement. Along the way, there were boomlets for Doc Rivers, Jeff Van Gundy, Lionel Hollins, Brian Shaw, even Larry Brown. But ownership and management settled on Kidd in hopes he can create a unique culture for what they see as a "new team."