Tuesday, Deron Williams should be returning for the Brooklyn Nets and Paul Pierce may join him. D-WIll is coming back at the right time for Brooklyn as Tyshawn Taylor and Shaun Livingston have been struggling as of late. If I had to guess, I'm assuming Williams will be on a minute restriction this evening. He hasn't played in two weeks and back when he was in the lineup, he only averaged 24 minutes a night. Andrei Kirilenko is still out and Jason Terry hopes to be back soon.

Pierce remains uncertain, but the betting is that he will back on court as well to face his old team. Although he broke his hand --official the third metatarsal of his right hand-- he practiced Monday and said as long as the pain is tolerable, he'll be there. He may not start, but Pierce understands the moment and the moment is here.

Coming into Barclays Center will be the first place (yes, first place) Boston Celtics. Much like the Philadelphia 76ers, Boston was supposed to be tanking this year in the hopes of rebuilding and securing a top pick in the upcoming NBA Draft. However, thanks in large part to the incompetence of the Knicks and Nets, the Celtics find themselves atop the Atlantic Division. The roster has been playing better than most everyone expected and there's been discussion as to whether this team is good enough to avoid tanking. After this game, Boston heads home to start a five game homestand. Their opponents will be: Los Angeles (Clippers), New York, Minnesota, Detroit, and Washington.

What's the story with these two squads? Let's find out

I don't think anybody should be out here complaining about the way in which the Nets won against Milwaukee on Saturday night. When your team has been playing as poorly as Brooklyn has been 20 games in, you take every win you can get. Williams' return should provide the Nets another scoring option to go along with Brook Lopez & Joe Johnson. Brook is coming off an excellent game against the Bucks as he scored 32 points in the victory. Milwaukee is undersized due to the absence of Larry Sanders & one look at the shot chart for Brook tells the story. 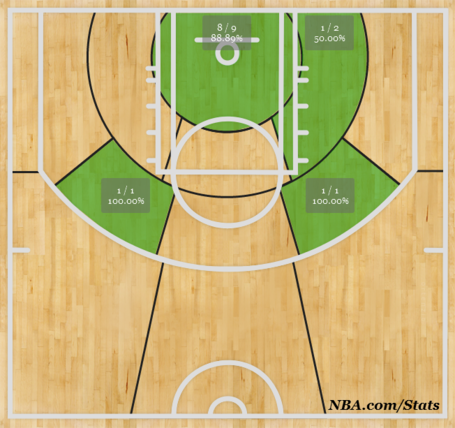 The Celtics are undersized, too, so look for Brook to dominate on the inside. As for the rest of the Nets, the defense is still a problem. They're the second worst defense in the league (107.9 points per 100 possessions) and their three point defense has been very problematic. They allow opponents to shoot 41.3 percent from downtown, worst in the league. After the Bucks win, Alan Anderson mentioned something very important. He said:

"We talked on defense," Anderson said. "Whether it was the right talk or the wrong talk, we talked."

I'm sure he's doing it already, but I hope Jason Kidd is emphasizing the importance of communication on defense.

Boston has won three straight games, including Sunday's game that the Knicks forgot to show up for. There aren't many noticeable names, but the team has been solid so far. First year coach Brad Stevens has done a good job of getting the most value out of this group of players. Former Wizards washout Jordan Crawford has been having a career year. In 30 minutes of action, he's averaging 13 points and 5 assists on a True Shooting percentage of 57.1 percent and on Monday was named Eastern Conference player of the week..

Brandon Bass & Jared Sullinger aren't the biggest players, but they've been doing good work on the inside for Boston. The defense is Top Ten in defensive efficiency, but outside of Avery Bradley and Courtney Lee, they don't have anyone that you would call a defensive standout. And not to be undone, our old pals Lee & Kris Humphries have been making positive contributions as well. Also, Kelly Olynyk, the well-regarded 6'11" Celtics rookie, may return vs. the Nets.

When he signed his new contract with the Celtics, I thought it was a bit of an overpay. He was just coming off heart surgery and didn't (in my opinion) play at a consistently high level for a long enough period to warrant a four year commitment. Throughout his tenure, Green has been solid, and over at Celtics Blog, Jack Jemsek discusses Green as it relates to him possibly being a Top two player on a Championship contender:

Has he reached his potential yet? Absolutely not after his complicated path to full health. But he a formidable talent and is a young 27 - not quite a five-tool player because of his ball-handling, but he's in the select crowd of players that can hit the 3-point, score inside, steal the ball, block shots, and rebound. That's the kind of stuff teams need from their top players.

His fatal flaw has been his deference to his teammates, and he's played with some mighty good ones on his two NBA teams. His coming of age was having to step up when Paul Pierce was hurting and become the Celtics top scorer in the Celtics short-lived play-off run last year. Doc asked Green to be more and Green responded as the No. 1 option. Now he's got a coach in Brad Stephens that seems to promote more of the selfless play that Jeff Green plays to a fault. One final note, how many players who aren't top tier talents have the chutzpah to hit a game-winner 3 pointer with LeBron in their face?

In this matchup, his three point shooting figures to play a major role. He's taking about three a night and is hitting on 38 percent of them. Anderson mentioned communication being an issue for Brooklyn, and if they aren't sharp on their rotations and talking to each other on defense, Green has the potential to have a 30+ point night.

Head on back to the Spring of 1991 and relive one of the last great games of Larry Bird's career.