Dennis Velasco goes across the East River and asks Seth Rosenthal of Poasting and Toasting about the New York Knicks, a true enemy of the Brooklyn Nets! However, the intensity of this rivalry has to be somewhat diluted because, well, both of them reek.

Share All sharing options for: E-Mailing with the Enemy: New York Knicks

1) I recently put this up on Twitter and I'm sure you would agree: "Tonight, it's the battle for New York City basketball supremacy where both combatants stink worse than the city itself." Obviously, there are some dynamics in play here (mainly, the ubiquitous injury bug that are "Starship Troopers" sized) as to why both teams are ridiculously horrid and disappointing, so that laid out, does this game matter as much as it's hyped to be? How much will either fan base really take pleasure from beating the other? As I stated and Jason Kidd said, both teams stink.

To the fans? I don't think it matters that much, at least not on my end. And definitely not the way it's supposed to. I've seen Knicks fans openly hoping the Knicks lose if it will accelerate Mike Woodson's demise as Knicks coach. Even for fans who don't wish for Woodson to be gone immediately, I can't imagine anyone taking that much pleasure in the Knicks beating a 5-13 team with, what, four key rotation guys missing? I don't expect to see much gloating after that win. If they win. And vice versa for the Nets beating a 3-13 team with a coach on the hot seat, trade rumors swirling, and the defensive anchor missing. Nothing to get excited about either way.

2) The Knicks are surfing the wave of a nine-game losing streak, but more than a few of them were winnable and ended up close losses. Last season, the Knicks won those types of games. What's going on this season that's different from last? Is it the players? Mike Woodson? 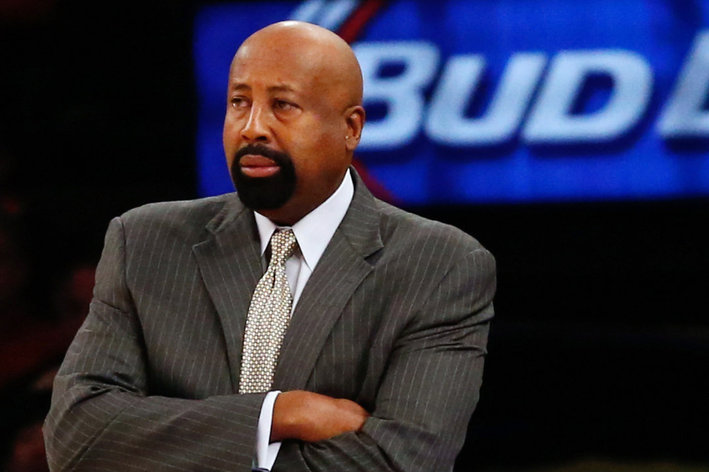 It's everything, and you can sort of check off the blame in sequence. Tyson Chandler is missing, and that's bad, but the Knicks were fine without him last year. The remaining roster has some gravely bad defenders and guys who just can't hit an open shot right now, but, again, the Knicks got through that last year. That leaves coaching. Whoever's governing the rotation-- and reports suggest that's not purely Mike Woodson's doing-- has gone away from the two-point-guard, shooter-happy lineups that so behooved the Knicks last year. And if Woodson's instructing his team to keep the ball moving and not make illogical defensive switches, then he's not reaching them. Everything is broken. Management sucks. Injuries suck. The rotation sucks, and the players in the rotation have really sucked.

3) Speaking of Mike Woodson, he was basically the toast of the ton and enjoyed a bit of "Woodsanity" (no, that'll never catch on, will it?) because of his ability to get his players to buy into his system, specifically, Carmelo Anthony. Is the honeymoon over? How much of a leash do you see him having with James Dolan lurking in the shadows and brandishing his guitar ready to get all Pete Townsend with it?

Yeah, the honeymoon's over. I don't know if guys aren't "buying in" or what, but as I said in the last response, guys simply aren't sticking up for one another on the floor. There is little chemistry and rarely any exertion beyond the bare minimum. If Woodson is calling for sets and establishing defensive strategies, then the Knicks just aren't following them. And his rotations reallly don't help matters.

That said, I don't know what his leash is like. The rumors say he's on the hot seat, but he switched agents to appease management and has apparently been making coaching moves for the same reason, so maybe the leash is longer than it seems?

4) Obviously, if the Knicks keep playing like this during the season, Melo is likely gone if it looks like the same basic cast of characters will return next season. What is the bare minimum that needs to happen on the court so he stays? Does anyone like Iman Shumpert need to be traded? Oh, and if you say money will keep him, that's the easy answer!

I couldn't possibly answer this question. I have no idea what Melo wants or what his intentions are, nor am I even certain the Knicks should WANT Melo to stay around at this point. But yeah, if I had to guess at an outcome for this whole thing, it's Melo sticking around on a max contract that exceeds what anyone else could give him. And yeah, Shumpert will probably be traded, though I have no idea if that has anything to do with Melo.

5) What are three to five things that Nets fans should know about the Knicks relative to this game and the season thus far? And give us a final score to tonight's game!

1. Andrea Bargnani's been quietly solid, and he's a pretty good one-on-one post defender. The Knicks might not let him, but I reckon if he guards Brook Lopez straight-up, he might actually do a decent job.

2. The Knicks aren't a three-point shooting team so far this year. After last season's record-setting numbers, the Knicks attempt threes at about an average rate and make them at a rate ranking near the bottom of the league.

3. Can Tyshawn Taylor navigate a basic pick-and-roll? He's gonna have a career night.

Leave your predictions for the game below!

For more on the Knicks, see: Posting and Toasting