Plus that one game in October too!

Share All sharing options for: The Month in Review - November 2013

It wasn't supposed to be like this. When Billy King got Paul Pierce, Kevin Garnett, Jason Terry & Andrei Kirilenko in the summer, everybody thought the Nets had a terrific offseason. Going into the season, everyone in the basketball community (us included) figured Brooklyn would compete for the Atlantic Division crown and maybe more. However, the team has underachieved, been besieged by injuries, and finds themselves near the bottom of a very weak Eastern Conference.

Injuries really, really suck. Going into the season, the projected starting lineup was Williams-Johnson-Pierce-Garnett-Lopez. They've only played 78 minutes together this year. A lot of that is due to injuries, but Jason Kidd also sought to protect his key players by shortening their minutes & widening his rotation. After the Orlando game, Reed Wallach wrote:

If the Nets want to work the chinks out of their armor, it is by playing together. Jason Kidd’s theology does make sense, by not playing his older star players and injury-prone guys too much, the team will be healthy enough for the latter part of the season, but it is hurting their long-term development.

This hasn't been the Nets only issue thus far, but it is one that is integral to their future success, and simple to fix.

Moving along from the injuries & questions about the rotation, the on court play has been awful. Their defense has looked dazed and confused as they've been run out of the gym by more athletic teams and have been late on many a defensive rotation. Offensively, no one had been able to get them jump-started for most of the month as they struggled to get things going (more on their issues here). A lot of that was due to the absences of Williams and Lopez, but when Paul Pierce was acquired, he was expected to: provide more value than Gerald Wallace and be a reliable third/fourth option that would take over when necessary. He's failed on both counts and won't have a chance to improve on his struggles for about a month.

Brook has missed a good amount of time, but he's still been the best player for the Nets this month. The big man averaged 20 points on 55.6 percent shooting and 6 rebounds in close to 30 minutes a contest. He's maintained the excellent shooting he displayed last season and has been their most dependable scorer. Joe Johnson had been carrying the offense while Lopez was away, but as he gets more comfortable being back in the lineup, he'll provide the Nets with tons of efficient scoring and acceptable levels of defense.

When asked who would be the team's MVP this year, here's what I said:

I'll say Kevin Garnett. In addition to all the savvy, experience, toughness, and whatever else you want to say about him, his effect on defense will be the most beneficial for the Nets. Even as Rondo and Bradley missed significant amounts of time, Garnett was able to anchor the Celtics defense and keep them afloat. Most impressively, Boston was 8 points better defensively per 100 possessions with Garnett in the game. He's still a great jump shooter and when you combine his defensive excellence with quality offensive production, he'll help the Nets be one of the op teams in the East.

Yeah, about that. Going into this year, KG had been one of the better shooting big men of his generation. Garnett had never shot under 40 percent from the midrange area and has always been great in the low post. However, he's been disastrous when he's had the ball in his hands. I could spell it out in words, but I think imagery works better in this instance. Here's Garnett from last season in Boston: 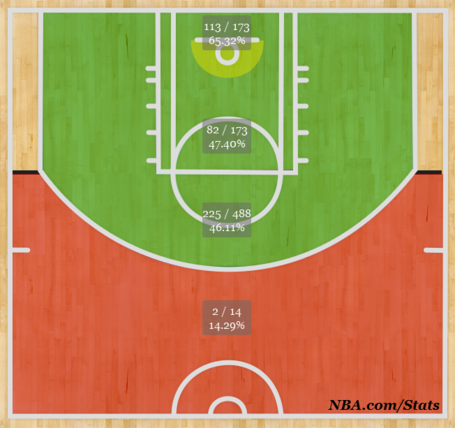 And November of this year: 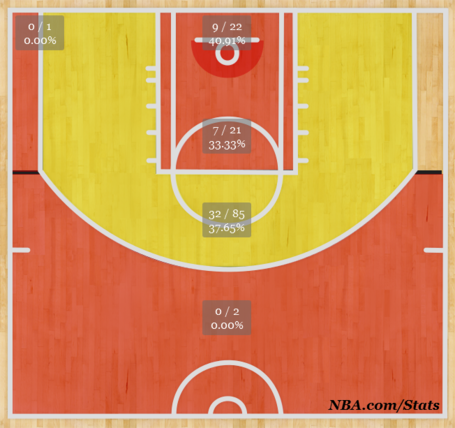 Ouch. One of the big problems the Nets had last year was the lack of production, particularly on the offensive end, by their power forwards. Garnett was brought in to remedy that, and he has failed miserably so far. It's bad enough he's been a non-factor on offense, but he has not provided the defensive benefit that he was expected to provide. The Nets are better on defense with Garnett on the court, but that's only in relation to how terrible they've been on that end. Even with their less terrible defense when Garnett plays, Brooklyn was about 12 points worse per 100 possessions when he was in. I think he has built up enough of a reputation and has played at an above average to elite level for long enough to be given the benefit of the doubt as it relates to him improving his play.

Anytime you beat the defending Champions is a plus, but when you consider how awful the Nets had been against the Heat and the fact that the game was on national television made it all the more special. Going into that game, the Nets, dating back to New Jersey, hadn't beaten the Heat in four years and LeBron James in five. The Nets played a great game and came away with a 101-100 win.

There have been a ton of ugly, uninspired losses, but this one might be the worst of them all. Coming off their great win vs. Miami, Jason Kidd making his (actual) coaching debut, and what was seen as a weak opponent, I thought the Nets would go out and get the win. Instead, they came out flat & got blown out for their troubles. Their losses to Minnesota & Sacramento are egregious, but when all of your big players are there and you've got an opponent you're expecting to beat, losing by 21 is unacceptable.

When you start off as poorly as Brooklyn did, every game takes on added importance. Here are some games I think you should keep an eye on:

The Nets were able to give the Clippers a tougher than expected matchup when they played a few weeks ago. With Brook Lopez back & maybe Williams, Kirilenko & Terry back by that point, Brooklyn might be able to pull off the upset. Los Angeles is a Championship contender & the class of the Pacific Division this year, but they won't have J.J. Redick for about two months

The first time Brooklyn played Indiana, the Pacers came away with a close win. The Pacers have been the best team in the league this year and figure to be Miami's toughest opponent come playoff time. If there's any benefit the Nets will have in this game, it's that the Pacers will be on night two of a back to back. They'll be at home playing the Celtics the evening before.

This game will have a much different feel to it now that Derrick Rose is out for the season. It also doesn't help that Jimmy Butler is dealing with turf toe. Even with those injuries, the Bulls figure to be a tough opponent for Brooklyn. When they're on, they play very physical defense & ought to give Brook & company trouble.

Unlike the game on the 23rd, the Nets won't have the advantage of getting their opponent on a back to back. The Pacers will be well rested & the Nets will be the ones playing night two of a back to back. Brooklyn will play host to Milwaukee the night before.

The Spurs are off to another excellent start and are one of the favorites to win the Western Conference. The game will certainly be challenging, but all I really want is for the Nets to do better than the last time they were in San Antonio.

What to expect this month

Well, it can't be any worse than it was in November. With Williams and Kirilenko hopefully on the way back soon, Brooklyn should start their climb up the (short) Eastern Conference ladder. As of this writing, they're only 3.5 games behind the number three seed in the East, the 9-9 Washington Wizards. And with teams such as Toronto, Charlotte and Boston expected to fall back to Earth, Brooklyn has a great opportunity to make it back to respectability.

It wasn't that long ago when Mirza was frustrated with his role on the team & subtweeting the Nets. Mirza has been playing well the past two weeks and with Pierce gone for now, he should continue to see minutes. His ability to space the floor with his three point shooting will space the floor and provide Lopez more room to work with in the post.