The Morning After: Ho Ho How Did the Nets Get Here?

And you thought those sleeved monstrosities were bad. Welcome to the Nets' new normal.

Share All sharing options for: The Morning After: Ho Ho How Did the Nets Get Here? 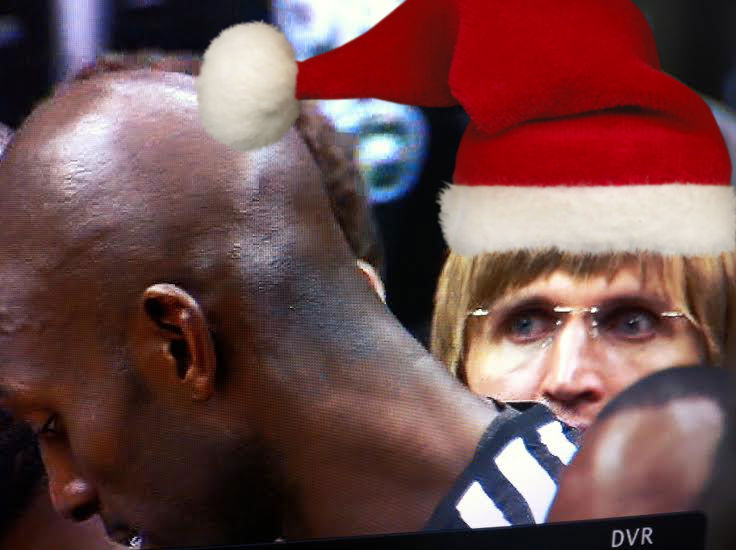 Thanks for nothing. Here we are, one third of the way through the 2013-2014 season. The theme of expectation vs. reality is all around us this glum holiday season as I unwrap gifts I didn’t ask for. But nowhere is it more damning than at the Barclays Center, where losing is the new winning: funny how quickly uncharacteristic losses can pile up and a series of outliers can come to embody the new normal.

On Friday night, a disgusted Paul Pierce said the Nets were "bottom feeders" in the NBA food chain. The next morning, the reason behind Lopez’ quick post-game escape was revealed: a broken metatarsal bone in his already screwy foot. A day later, Pierce scored exactly zero points, and to save himself from further ignominy, clotheslined his way out of the arena with $15,000 less in his pocket. If there was any uncertainty about whether the Nets had it in them to steer the season away from the gutter, get healthy, unite under the reinforced voice of Jason Kidd and simplification of the Nets defensive schemes, this was the death rattle of the frenzied worm still wriggling about after multiple severing points.

With Lopez once again relegated to the injury list to rehab his chronically faltering limb, the Nets’ fate free-falls from sad to lifeless. The organization now stares at a harrowing Saw-like situation where plausible outcomes hang somewhere between inescapable mediocrity and abject horror -- with past dealings holding them hostage to certain standards of success, or else.

There’s a long line of creditors knocking at the door through 2019 and the Nets can’t press the eject button. In a league like the NBA where the incentive structure so shamelessly rewards teams with bleak outlooks similar to Brooklyn’s, that is an irrevocable blow. It doesn’t necessarily get any sunnier longer term, either; the Nets have few liquid assets for Billy King to brandish around the league, and they must now consider the increasingly dour mood of future hall of famers who considered Brooklyn one of two or three destinations worthy of extending their already illustrious basketball careers.

In other words, it’s hard to fathom a reality in which the Nets can compete this season, and it’s equally difficult to conceive of a scenario that allows them to nimbly refashion the roster into anything better than average-ish going into the next.

Hindsight has emboldened prognosticators who swear they told us so, but if it’s any consolation, the NBA powers that be were also bamboozled, and didn’t know so. Yesterday’s slate of early games confirms this: the first course featured the formidable Nets against the decimated Bulls; we then moved on to a scrumptious feast where the putrescent Knicks dared to play the foil to the overachieving Thunder; and finally, the battle between Jim Buss’ mutant Lakers and the merciless Miami Heat.

Someone alert Nielsen that we might be flirting with record ratings.

There are few silver linings in this grisly tale. The Nets inherited expensive depreciating assets without the benefit of resetting the clock that had started to tick unbearably loud in Boston last season. More upsetting is that Lopez’s recovery timeline coincides with the expiration date of the players who were brought in to help lift this franchise past last year’s disappointments. But the real tragedy lies in Lopez’ now precarious future.

Injuries nonetheless come with positive unintended consequences worth fixing our gaze on. 450 players cycle through the NBA ecosystem and many more are on the outside looking in. Whether a player earns a proper audition is oftentimes a probabilistic issue determined more by a slew of human and basketball factors than one based on objective player evaluations alone. Just when you think a coach has taken stock of the players on his roster, someone crumbles to the floor and his understudy unexpectedly rises in his place (see: Lance Stephenson (Danny Granger), Avery Bradley (Ray Allen). Witness the surprising Terrence Jones thriving in the place of injured/disgruntled Omer Asik, or Jordan Crawford stepping in for Rondo with the gusto of an intoxicated bull and leading the league in mid-range shooting efficiency while he’s at it). It’s the natural cycle of player development in the NBA, which barring injuries and unfortunate circumstances, can feel a lot like a congested soup of limbs for players chomping at the bit and looking to subvert the order of things. Who will emerge from the crop of Nets players? What unexpected player will we come to embrace?

In the aftermath of the injury, we heard Kidd say that we won’t necessarily be seeing more of KG, but that doesn’t mean we won’t be seeing more of KG used in the right way and recapturing some of his late career magic at the center position. We saw a glimmer of that against those sadistic Pacers when KG recorded 6 free throw attempts, or just about half of the 15 he had attempted all season. That has to count for something, right?

As for Lopez, there’s no need to ring the death knell just yet. Some would have you believe that it’s all over, choosing the fatalistic narrative instead of carefully examining the sample of afflicted seven footers who were hampered by similar setbacks. Such injuries have sometimes spared the careers of budding stars who were destined for even greater success. While Lopez enjoyed a stretch of 246 uninterrupted games in his first three seasons and was shelved for 150 contests in the next three, Illguaskas’ career took a different path. Zydrunas missed his entire rookie season and was hobbled two years later, appearing in only 5 games. The lockout wiped out another season and injuries robbed him of three quarters of the following one. Just as the doom chorus was growing, he went on to average an amazing 73 games a season over the next decade while hitting that mid-range shot with an obnoxious regularity that infuriated anyone not in a Cavalier jersey.

Derrick Rose’s Adidas commercial may glorify basketball’s all-fulfilling virtues in the face of utter desolation, but the script he would have chosen diverges from the commercial myth of the sports warrior who, stripped of life itself, finds salvation in sports:

It’s not going to be easy, but hang in there, Brook. We’ll be out there shooting set shots at the playground in your honor until you return.

Until then, Nets fans, do what you can to enjoy the awkward holiday family chatter and those precious random breakout performances that will lift our droopy spirits. And find solace knowing that a nation of Nets fans collectively sips their spiked egg nog, mourning the season we all dreamed and hoped this one would be. If there’s anything that the NBA has taught us it’s that nothing stands still for very long regardless of how many first round picks you’ve managed to gift other teams. Something has to give.

Here’s to forgetting this ever happened, and to a future that looks nothing like the present.