Film Breakdown: What went wrong for the Nets on Evan Turner's buzzer beater

Author's note: This was written before the news of Brook Lopez breaking his foot was released.

Share All sharing options for: Film Breakdown: What went wrong for the Nets on Evan Turner's buzzer beater

The Nets lost yet another backbreaking loss last night, this time to the Philadelphia 76ers. The overtime loss came down on the Nets defense, a part of their game that has been a place of struggle all season long. Evan Turner capped off the game with a buzzer beater that hit several different spots on the rim before going through the net.

If you already erased that play from your mind, here it is again.

Lets dive deeper into the play, starting from the inbounds. 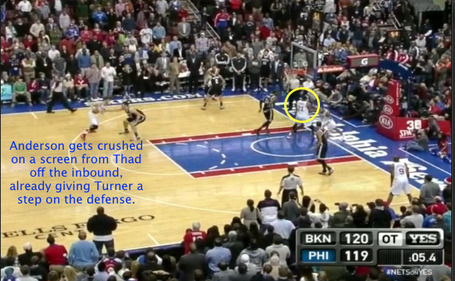 As one can see, Thaddeus Young lays a monster screen on Alan Anderson, freeing up Turner just as the ball gets to Spencer Hawes. This was just a great play drawn up by Brett Brown. Anderson couldn't have avoided that screen by any means. 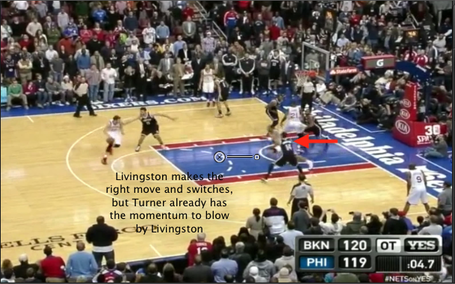 Since Anderson is unable to keep up with Turner, Shaun Livingston leaves James Anderson to take the former Ohio State standout. However, Turner already has a full head of steam and Livingston can't slow him down. By the time Turner gets the ball, there is a little less than four seconds left-plenty of time in basketball terms. 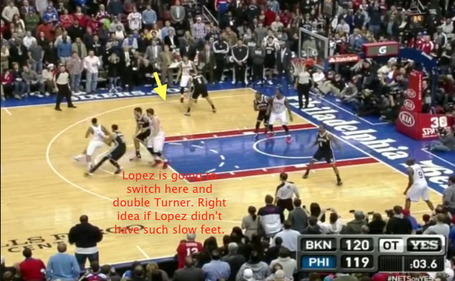 Spencer Hawes, who got the inbounds pass from Turner, hands the ball off to Turner. Brook Lopez, knowing there isn't much time on the clock, makes the right move and slides down the court with Turner, despite what we now know: he's playing on a broken foot. The problem is that Lopez doesn't slide over enough, allowing Turner to continue to drive hard to the basket. Had Lopez put his body in front of Turner, Turner would have been trapped near the top of the key. Was he limited by his foot? 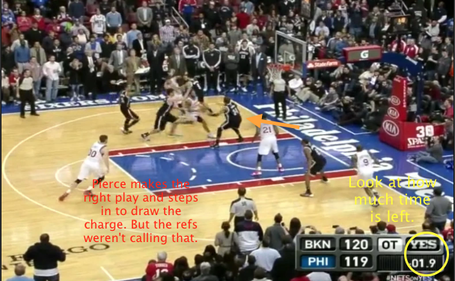 Paul Pierce made the veteran move to step in to take a charge on Turner, who was not slowing down at this point. It looked like a charge, but one can't expect to draw a charge call with less than two seconds left of the game on the road. Pierce had nothing else to do; if he would have jumped to block Turner's shot he likely would have fouled him.

The real problem is of how much time is left on the clock. Turner went from the baseline, to the top of the key, to the baseline again in about four seconds, and didn't hesitate at any point. That part comes down on the Nets defense, and their lack of it.

Of course the shot went in, and the Nets lost once again. This type of late-game failure is unacceptable for a team that has the talent to be one of the best in the Eastern Conference. Had the Nets made the extra step, put in a little bit of more effort, they would have walked out of the Wells Fargo Center with a win.

If you want to watch the full breakdown of Evan Turner's buzzer beater: click here