Brooklyn looks to climb in the standings against Washington

Share All sharing options for: Brooklyn looks to climb in the standings against Washington

Slowly but surely, the Brooklyn Nets are inching back to respectability. With the exception of their loss in Detroit, the Nets have been excellent since Deron Williams returned from his ankle injury. They're 3-1 since Deron's return last week, including laying a 39 point smackdown on Philadelphia. Brook Lopez was expected to return on Monday, but was ruled out. For this contest he's listed as questionable. As for Andrei Kirilenko, he hopes to return by Christmas.

Coming into the Barclays Center will be the Washington Wizards. Like most teams in the East, they find themselves in the playoff chase despite having a below .500 record and negative efficiency differential. Washington has been slumping as of late, losing four out of their last 5. This is a rematch from the game Washington won (in overtime) 112-108 on November 8.  But for the first time in a long time, they may have their "ideal starting lineup<" as the Washington Post calls it.

For the Nets, the new motto is: KISS, keep it simple, stupid. Jason Kidd has simplified both the offense and defense.

"I’ve simplified it," said Kidd without elaborating. "That’s as good as it gets when you simplify things and guys have bought in and guys are doing it at a high level right now."

Williams likes what he sees --and hears-- from Kidd now, compared with before Kidd dumped Lawrence Frank. "Lawrence was always kind of the defensive guy, so he was talking on defense and he was definitely long-winded when it came to teaching,"

What's been the story with these two teams? Let's check the numbers

Things are a little bit different compared to the meeting in November. For starters, the Brooklyn was at 100 percent. The Nets were also on the first night of a back-to-back which concluded with a critical early season test vs. the Pacers.

Brook would be very important for their chances against Washington. He dominated Marcin Gortat and company in the November matchup, making eight of his 10 field goals inside the restricted area. With Brook's status up in the air, Joe Johnson and Deron Williams should pick up the load. Johnson is coming off an amazing game vs. Philadelphia, hitting ten three pointers. It's incredibly unlikely he'll repeat that spectacular feat again, but he should have a good game in this one. He'll more than likely be matched up with Trevor Ariza and while he has a bit of a quickness advantage, Johnson should have some success against him when he operates out of the post. As for Williams, he should continue his stellar play since coming back. He's looked excellent in every game he's played and should be eager to match up against a premier guard like Wall.

There appears to be trouble in D.C. Bradley Beal is just returning to the team after dealing with a leg injury that had him out of action for a few weeks. Nene hasn't played since December 6, although there's a possibility he'll be available tonight. And Marcin Gortat appears to be unhappy with how he is utilized in Randy Wittman's offense. He disapproves of the overreliance on mid range jumpers, and he has a bit of a point. It's been demonstrated over and over again that midrange jumpers aren't all that valuable for an offense.

The return of Beal should help jump start the Wizards offense. Although they're seventh in three point  efficiency (thanks in large part to Beal & Trevor Ariza), they're near the bottom of the league in overall efficiency. This weakness is probably a result of their over reliance on midrange jumpers. As Gortat alluded to above, Washington takes too many two point jumpers. They're eighth in midrange attempts, but have the fourth lowest efficiency rate. As someone who doesn't see the Wizards on a consistent basis, this shot split could be a result of defenses not respecting their shooters and playcalling. The Nets have still been one of the league's worst defenses this year, but their play has been much improved of late so Washington's struggles might continue here.

You could make a pretty good case that John Wall is the best point guard in the Eastern Conference right now. Derrick Rose is gone, Deron Williams has been battling injuries for a good amount of the year, and Kyrie Irving has been very underwhelming. Irving's lackluster play hasn't affected All Star Voting (does it ever?) and he's way ahead of Wall in the voting.

Wall's numbers don't look pretty on the whole, but by all accounts he's been having a good season. One thing that has changed in Wall's offense compared to recent years is the three point shooting. In his first three years, he rarely took a shot from deep (under 10 percent of his attempts came from deep in each year). However, this year 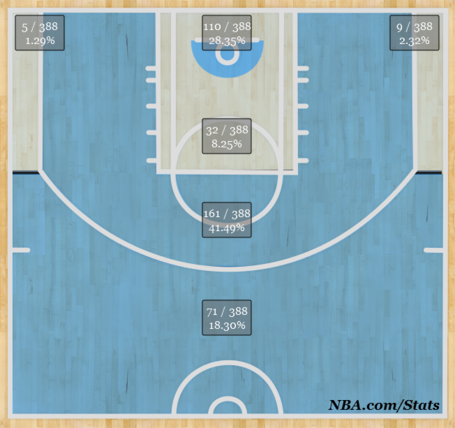 over twenty percent of his attempts have come from deep. However, he's only shooting 30 percent from deep and 36 percent from the midrange area. One thing that hasn't changed is his success driving to the basket. He's shooting close to 64 percent inside the restricted area, and with his sense of court vision, is able to rack up nine assists a night. The shooting numbers aren't pretty, but that hasn't limited Wall's effectiveness on the court. Here's Thomas Pruitt of Bullets Forever to explain:

The funny thing is that Wall's not even shooting all that well this season. His true shooting percentage of 45 percent is poor, and he's only making 30 percent of his mid-range jump shots. Nonetheless, Washington's offense has been excellent with him on the court and completely falls apart when he sits. The Wizards score 105.4 points per 100 possessions when Wall on the court , meaning that they score as well as almost any team in the league with Wall running the show.

When he sits, that number plummets to an atrocious 82. Despite his poor individual shooting, Wall's presence this season has essentially meant the difference between Washington having one of the best offenses in the NBA and one that would be lucky to crack 80 points on a nightly basis.

The last time Wall saw a premier point guard, Chris Paul had one of the more efficient games in recent memory. I'm sure he'll be more than ready to match up against Deron Williams. He's quicker than Williams, so look for him to drive to the basket on a consistent basis. If Lopez is out again, the Nets big men will have to be even more careful in avoiding fouls. Brooklyn doesn't have enough depth to withstand Kevin Garnett on the bench early with foul trouble.

Since he's looking for work, let's head on back to 2006 and relive one of Gilbert Arenas' finest performances as a member of the Wizards. I should also add that those Washington jerseys are spectacularly awful.