Author's note: This is the first in what we hope to be a series in which we break down game film. Today we look at different ways to utilize Brook Lopez on the offensive side of the ball.

Share All sharing options for: Film Study: Using Brook Lopez in the pick-and-roll

The Nets are starting to turn it around, but they still have some major adjustments that need to be made. On offense, at times the team looks more like a dumpster fire than an actual NBA team. One could point their finger in many different directions, with it being firmly planted on Jason Kidd, who, by one scout's count, ran 15 offensive sets through the first 10 games. But, those deserving an equal amount of blame, though, are the players. Yes, Kidd should be a more active coach in calling plays, which he is starting to do more of, but beyond the calls, the players need to execute when on the court.

Truthfully, in the sets the Nets are running, it would be nice to see them utilize their 7-foot center, Brook Lopez, more often. Namely, in the pick-and-roll.

"How is Lopez not used enough, he is averaging 20 points and taking 13 shots per game?" one may ask. Lopez is the arguably the best offensive center in basketball. He has an offensive rating of 124 this season, a career high, and is shooting 56 percent from the floor. Lopez is fifth in the league in PER, behind only LeBron James, Anthony Davis, Chris Paul, and Kevin Durant.

If you look at his usage rating, though, it seems as if Lopez isn't being used enough; he has a usage rate of 26.8 this season, the lowest it's been since the 2010 season.

With a quick, slashing point guard in Deron Williams, who can get to the basket if he gets a step on his man, big men must hedge hard to slow him down. This would enable Lopez to get an easy look around the rim when he rolls after setting the pick.

Here is a play of the two running a PNR: look for how much space Lopez gets due to the attention Williams gets from DeMarcus Cousins.

Weighing 290 pounds, Lopez isn't going to be stopped by many big men when he gets into the lane. However, Lopez is a unique center with a feathery touch from the outside. His go-to shot is a bank shot from eight feet out, but if left open, he can also expand his range past the foul line.

In this play against the Magic, Nikola Vucevic keeps himself planted in the paint to not only stop Williams from driving to the basket, but also stop Lopez from rolling to the basket with ease. If this was someone like Roy Hibbert or Dwight Howard, that would be fine decision making by Vucevic, but Lopez can't be left open from there.

Is Jason Kidd failing to enforce this type of play, or is it Lopez failing to initiate the pick-and-roll? It could be both.

Lopez can shoot jump shots, but that should not be his first look. If Lopez set the pick-and-roll for Tyshawn Taylor on that play, then the foul line or corner jump shot could have opened up, depending on which way he rolled. But his post up turned into a stand-still 20-footer due to his failure to recognize the situation.

What is another notable consequence of Lopez taking the ball out to the perimeter is the Nets' spacing. Look at how tight the weak-side gets when Lopez caught the ball. Now there are five guys on along the three-point line and zero inside the paint. 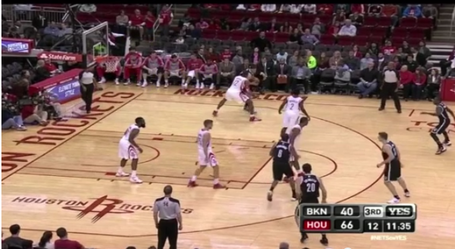 Upon Lopez's missed jumper, there was no one to go contest for a rebound.

The Nets are beginning to make strides on offense. With D-Will back from his injury and looking healthy, the offense is flowing much better. But for them to take the next step and be a feared team on the offensive end, Brook Lopez needs to be used more often and in more efficient ways. His post-ups are effective, but the Nets should be looking to work him into more pick-and-roll sets.