Brooklyn tries to keep the streak going in Detroit

Share All sharing options for: Brooklyn tries to keep the streak going in Detroit

They've still got a long way to go, but the Brooklyn Nets have been looking great recently. After being on the receiving end of two massive beatdowns at home last week, the Nets have won three straight games. Last night, they took on the first place Los Angeles Clippers at home. After a slow start, they came back and dominated Los Angeles. On the injury front, Brook Lopez twisted his ankle against the Clippers but did make the trip so he's probably going to be a game time decision. Andrei Kirilenko said he's out for at least ten more days, but it might take him even longer to get back into top form. No word on Jason Terry as of this writing.

The opponent this Friday night will be the 10-13 Detroit Pistons. They've underachieved but are still in playoff contention due to the poor play of their Eastern Conference peers. They've lost three straight games after going on a four game winning streak which included a win at Miami.

What's been happening with these squads? Let's check the numbers:

With Lopez's status up in the air, the strategy might be a bit different for Brooklyn. Assuming Lopez is out, Andray Blatche will get the start. He's coming off his best game of the year as he outclassed the frontcourt combination of Blake Griffin & DeAndre Jordan. He'll have his hands full dealing with Monroe & Drummond so I wouldn't expect him to play as well as he did last night. When he first came back,I thought Deron Williams would be on a minute restriction as he worked his way back from his ankle injury. Two games into his return, and my concerns seem misplaced. He played excellently against the Celtics and had Chris Paul in a spin cycle on national TV. Although Kevin Garnett has struggled massively this year, he's been the best defensive rebounder in the league. His success on the glass will be crucial if the Nets want to slow down Drummond.

The beauty of having Andre Drummond, Greg Monroe & Josh Smith play together is that they will own the offensive glass whenever the Pistons miss a shot. The Pistons have been the best offensive rebounding team in the league, collecting 31.1 percent of their missed shots. Outside of that, they aren't a great offense. They're middle of the the pack in effective field goal percentage and dead last in free throw percentage (such is life when Smith, Drummond & Monroe lead your team in FTAs). Monroe figures to be a major challenge for the Nets. He's one of the best passing big men in the league and is better than most near the basket. I thought he was a better jump shooter big, but his numbers don't match my perceptions. As for Drummond, he's been excellent since he entered the league out of UConn. I remember there were tons of complaints hurled at Lawrence Frank for not playing Drummond more last season. Under new coach Maurice Cheeks, that hasn't been the case. Drummond has maintained his high level of productivity from last season and is doing a better job of limiting his turnovers. His play has some calling for him to start in the All Star Game, but Brook & Roy Hibbert will provide some tough competition for the starting spot (and who said the Center position was dead?).

The other big Detroit acquisition this offseason was Brandon Jennings. So far, he's lived up to his inefficient reputation as he's barely shooting over 40 percent over the field despite being tied for the team lead in usage rate. Coach Cheeks wants him to be a better defender, but that doesn't seem likely given Jennings' career as a defender.

Seriously, look at this shot chart 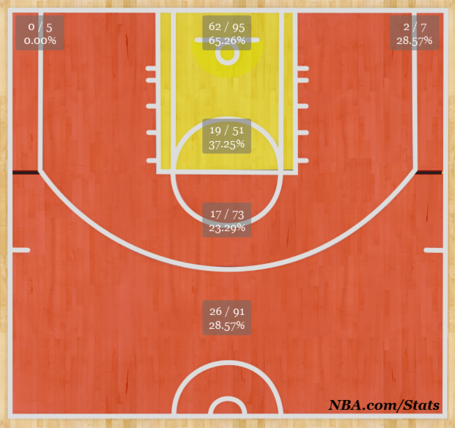 ...and try to tell me you wouldn't be out for blood if Smith was on your team. And the worst part is that he's been told repeatedly to take fewer jumpers throughout his career.

Smith has been a great defender in the past, but he hasn't been doing the job for the Pistons on that end. When we last saw Detroit, Smith was struggling at the small forward position. Here's what Detroit Bad Boys writer Ben Gulker told our own Tom Lorenzo back in November:

I believe there is a strong case to be made for bringing Josh Smith off the bench. It's clear that he's not playing well offensively or defensively at small forward. He's never been a consistent long-range threat, and he hasn't had to cover perimeter rotations in several seasons. He's struggling mightily with both of those things.

And when we take a look at the team's defensive numbers, the struggle has continued. By the numbers, Detroit's defense is unchanged when Smith is in the game or off the court. When you take into account the Pistons not being as improved on defense as they should be with a player like Smith & his own offensive struggles, the acquisition of Josh Smith has been disastrous so far for Detroit.

I figure he'll spend a good part of the night defending Joe Johnson & Paul Pierce. He's got the size to successfully defend them when they go into the low post and is quick enough to stay with them on the perimeter. Brooklyn's defense has been much improved as of late so I wouldn't peg him for a big scoring night.

Head on back to March of 1998 & watch Grant Hill at his best against Michael Jordan, Scottie Pippen and the Chicago Bulls.