E-Mailing with the Enemy: Boston Celtics

Dennis Velasco sends an e-mail to Jeff Clark from Celtics Blog asking five questions. Jeff responds in kind, and particularly in the end, throws some shade the Nets' way. We shouldn't expect anything less. Ha!

Share All sharing options for: E-Mailing with the Enemy: Boston Celtics

1) Maybe people saw the 10-12 record at this point, but who would have thought the Celtics would be in first place in the Atlantic Division. It's been such a screwball kind of season so far in the division, well the whole Eastern Conference with only three teams above .500, but what is feeling about the Celtics progress thus far with all of their new personnel? Do Celtics fans realistically think this team can contend for a playoffs spot with some teams currently underachieving (*cough*Nets*cough*), but still get back on track?

I predicted 30 wins and the most optimistic fans only expected about 38 wins and that's about what we're on pace for now. Nobody thought that would be good for anything but the last playoff spot. The East is such a mess and I'm starting to wonder if it will ever get itself fixed. I suppose that's up to the New York Knicks and Brooklyn Nets and maybe a few other teams actually motivated to win (Wizards? Pistons? Hawks?). For the Celtics, there's the obvious motivation to finish out of the playoffs, but there's no sign from the team that they're tanking in any way. Instead, they are focused on developing talent so guys like Jared Sullinger, Jordan Crawford, and (when healthy) Kelly Olynyk are getting extended looks. So far that's working better than most expected, but there are sure to be good days and bad days.

2) Speaking of underachieving, is that what Jeff Green is doing? Granted, his numbers have improved from last season, but with Paul Pierce and Kevin Garnett gone, as well as an injured Rajon Rondo, many thought that Green would explode with the time and shots he'd get and be the main guy. Should Green be producing more? If so, how does that happen for him? 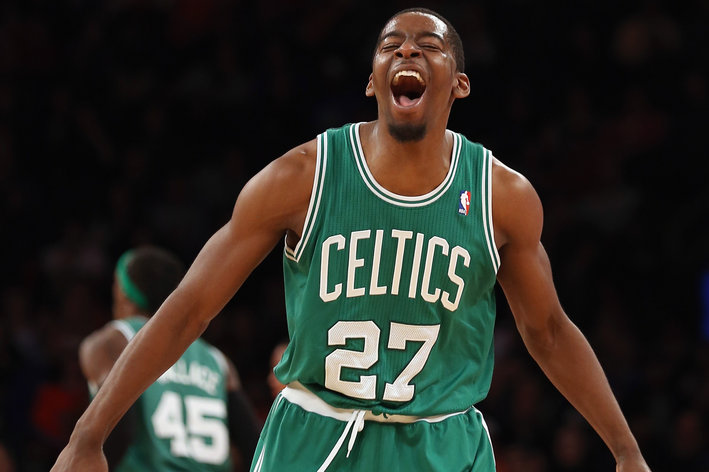 Jeff Green seems to simply be settling into what he is. A very talented, very versatile, very valuable team player. He can score, but I don't ever see him being a number one (or perhaps even a number 2) option. He's got some of the tools of a number one guy, but I think that he lacks the mindset. That's not necessarily a bad thing though. He doesn't force anything and sometimes that looks like lack of aggression, but I think he's also trying to make the right basketball plays. Would you rather have Jeff Green giving you excellent starter production for $9M a year or Rudy Gay taking tons of inefficient shots at his salary?

3) Jordan Crawford on the other hand, has been doing very well thus far. He's even leading the team in dimes (5.4) and shooting a career-high 46.4 percent from the floor, significantly higher than his career 40.8 percent mark. Is this production something that is sustainable throughout the season? What happens when Rondo gets back and the rock isn't in Crawford's hands as much? Barring a Rondo trade of course.

Crawford has been the surprise of the season and he's been fun to watch. You can still see the Steeze peek out from time to time, but for the most part he's been very solid. I feel like he's the kind of guy that needs the ball in his hands and gets into a rhythm that way, so it is a concern for me what he'll do when pushed back to a bench role. Brad Stevens has done wonders with him so far, so it should be interesting to see how he handles that transition.

4) And, that's probably a question that looms in the air for the Celtics - will they trade Rondo? Surely, getting assets, particularly for this upcoming NBA Draft has to be something that Danny Ainge would love to do. It seems that Brad Stevens is doing a relatively good job right now with this team and maybe Rondo messes that progress and chemistry up. Does Rondo even still fit into the plans of the franchise?

Nope. I don't mean to be glib, but I just don't see them trading Rondo. Danny Ainge sets a value on guys and doesn't generally move them until he gets that value. He will always listen, but I don't think anyone will give us what Rondo is worth. If that means winning "too many" games to qualify for the lottery, so be it. It is more important to retain and develop the talent that we have. And I think Rondo fits perfectly into Brad Stevens' philosophy and style. He's going to be The Man finally and I think he'll enjoy the process of developing the guys around him (Rondo's hinted at wanting to be a coach someday).

5) What are three to five other things that Nets fans should know about the Celtics this season and give me a final score for tonight's game!

Well, first, Jared Sullinger is a beast who is adding a three-point shot to his arsenal. Second, you might be surprised to hear that Gerald Wallace and Kris Humphries have been big-time contributors (in smaller roles) to the recent wins. Third, Celtics fans are giddy about the draft picks the Nets owe us (sorry).

Give us your predictions below in the comments!

For more on the Celtics, see: CelticsBlog