E-Mailing with the Enemy: Washington Wizards

Dennis Velasco corresponds with Bullets Forever's Thomas Pruitt to talk about the Washington Wizards and Brooklyn Nets match-up in our nation's capital!

Share All sharing options for: E-Mailing with the Enemy: Washington Wizards

Dennis Velasco: Hey Thomas! So, the Washington Wizards finally won their first game of the season on Wednesday night, exacting a bit of revenge on the road versus the Philadelphia 76ers who beat them in DC last Friday night during the Wizards' home opener. I was at the Verizon Center that night on a business trip and was excited to see John Wall play in person, as well as Bradley Beal, who seemed to love spotting up in the corner all night. In that home opener, the Wiz came out gunning (no pun intended... maybe) in the first quarter and Wall, in particular, was hot - he is simply amazing when driving to the hoop in a crowd. Then, it all fell apart. Wall, on pace for a 46-point night after scoring 23 in the first half did diddly-squat in the second half, finishing with 26 points in the Wizards' eventual loss. In Wednesday night's win on the road, Wall's production was more evenly spread out (24 points), as well the whole team that had five players scoring 14 points or more.

As one of those teams that's talked about possibly getting a lower seed in the Eastern Conference playoffs, what needs to happen for them to make those aspirations of the postseason happen? Is it a, "As John Wall goes, so go the Wizards" type of deal? I personally loved the acquisition of Marcin Gortat because it's obvious that Ted Leonsis wants his team in win-now mode, or at least, make-the-playoffs mode, ridiculously talent-filled 2014 NBA Draft be damned! Having Gortat and allowing Nene to slide to his more comfortable 4-spot should help the frontcourt. What are your feelings on the deal? Also, do you see Beal going up another level in his development this season after a promising rookie campaign in 2012-13? What are three to five other things that Brooklyn Nets fans should be looking out for on Friday night when the Nets visit our nation's capital to do it up versus the Wizards?

When Should John Wall Be Shooting Threes? 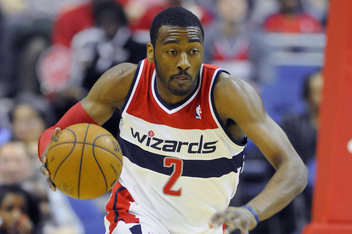 Mike Prada takes a look at when it's appropriate for John Wall to be shooting threes.

Thomas Pruitt: Come on, can't we all forget about the gun thing? Or even, for that matter, the last, oh, five years?

Wall's a beast, but he's not quite elite and I don't know that he'll ever be. Top ten point guard, sure, he's already there in my humble opinion, but I don't know if he'll ever be a top ten player which is really what you need to even make the NBA Finals, much less win a ring. He's very good and the improvements to his outside shot are making him almost scary good. That said, he's not an elite shooter and can't overwhelm everyone on the half court with his athleticism a la a Dwyane Wade or LeBron James, so I don't see him being good enough to truly carry the team. If Washington is getting some very serious contributions from Beal and Nene while fielding a top ten defense, this team can max out at around 50 wins. Unfortunately, it's rare that everyone on any team is playing at their best possible level. Wall can carry them to a win every now and then, but he can't do it every single night.
I like Gortat and I like the trade that brought him here. Gortat's deal is expiring so hopefully the organization can cut bait or use their cap space to play around this summer and get an equivalently talented player who is a few years younger. The draft pick will be outside of the top twelve and, while that might mean something to a team with better management, Washington's GM is a complete joke. Here's a sampling of several first round picks taken by Ernie Grunfeld: Jarvis Hayes, Oleksiy Pecherov, Jared Jeffries, Trevor Booker, Kevin Seraphin, Jan Vesely, Nick Young and JaVale McGee. Of that group of players, how many have your readers even heard of? And of the ones they are familiar with, how many would you want starting for you? The team management is awful and until it stops blaming the players for not producing as opposed to the guy who brought them here, the team isn't going to accomplish anything of note, so it's hard to get worked up about what could have been when it comes to any draft pick. Don't get me wrong, firs- round picks are great, I just don't have any faith whatsoever in the team's ability to use them on anyone who could be a difference-maker.
Beal could go either way. Most people are high on him and I like his long-term potential, but he's just still young and not very sure of himself, so he could struggle this year. Keep an eye on how well he moves without the ball, his ability to get open for jump shots is just sick.
[Andray Blatche] and the Wizards get along like Stone Cold Steve Austin and Vince McMahon, and he always tries to make a statement against them. -Thomas Pruitt
Speaking of things to keep an eye on, check out Trevor Ariza. He's been playing very well this year, his deal is about to expire and he's a very good shooter from the corners when he gets his feet set. He could really help a contender and you guys might even want to take a look at him if, God forbid, an injury should hit Joe Johnson or Paul Pierce. The Wizards already have Martell Webster and Otto Porter, so it's very unlikely he sticks around much longer. He should also come cheap and could probably be had for an expiring contract and a pick in the 20s.
I'd also keep an eye on one of your players, Andray Blatche. Dray and the Wizards get along like Stone Cold Steve Austin and Vince McMahon, and he always tries to make a statement against them. He could shoot Brooklyn out of the game or he could be a huge difference-maker. Either way, he's probably going to put up a dozen field goal attempts tonight.
DV: Well, actually, the pun was a little more innocent as I was really inferring the former team name of Bullets, but it's understandable for it to come back to Agent Zero and Javaris Crittenton, both wastes of talent. Sorry for bringing back the bad memories.
It's a great point about the Wizards' overall draft selections in the first round. At least with Gortat, he's a known commodity in the NBA and you know what you're getting with him. It's interesting that you mention Ariza and his tradeability to a contender. But, if that happens, wouldn't that mean that the Wizards are giving up? Usually in those types of trades, the team sending out the player gets back a draft selection, and I don't think many teams will be trading picks from the 2014 NBA Draft. So, the other option, if they trade Ariza, is taking back a longer contract or, less likely, another expiring. Can you name some players that might be of interest for the Wizards if they go this route?

See Bullets Forever for more on the Wizards!
Also, it's doubtful the Nets would trade for Ariza as they are pretty much set, having a full 15-man roster, which I'll assume they'll want to keep together for the sake of chemistry and consistency. In fact, considering how much the team is paying in luxury tax, it's really doubtful they make any more moves this season, but it's possible during the offseason. However, I expect it'd be things such as re-signing players like Paul Pierce or trading rights to Bojan Bogdanovic. The former is more likely than the latter.

In any case, what do the Wizards need to do to win tonight? What do you think the final score will be?
TP: I think they could trade Ariza and still compete, it just depends on how well Porter develops. His skill set is almost exactly the same as Ariza's - lanky guy who can hit a three, rebound at an above average level, cut to the basket and defend wings at a high level - and if he pans out, Ariza becomes expendable. Then again, Porter's a lottery pick who struggled to create his own shot in college and those guys have a poor track record, so it might make sense to hold on to him. The Wizards also have Webster waiting in the wings and he's perfectly adequate as a three and D guy. tl,dr version of this - Washington has three small forwards who should be capable of starting for a decent team.
Yeah, the Nets are stacked and there aren't too many guys that a developing team would want. From the outside looking in, it seems like the team's Achilles' heel could be the lack of a wing stopper to mess with LeBron and Carmelo Anthony in the playoffs. I'm not saying anyone in particular should be brought in to fill the role, just that it's something that's going to be interesting to follow.
The Wizards need to get a little lucky and Wall needs to overwhelm Deron Williams with his speed. I think Beal could be the key guy for the Wizards - Johnson can mess him up on both ends of the court in one-on-one situations, but Beal's good at running around screens and getting free for jumpers. If he can break out a bit, maybe shoot something like 10-18 feet and make five three-pointers, Washington could win. That's unlikely to happen, though, and I suspect that Brooklyn's defense is going to get better and better as they get more used to playing with each other. My prediction for the final score is 110-98 with Brooklyn getting the win.
DV: Ariza could be that guy, but the Nets do have Andrei Kirilenko. If he can stay healthy (his only issue because he doesn't need any offense called for him and he took a pay-cut to win a championship, so complaining about whatever would seem like a moot point), I think the Nets will be fine with him guarding those type of players. I'll go 104-86 with Brook Lopez beasting down low (on anyone not Gortat) and hitting perimeter Js (on Gortat) with more of the former. The defense will be strong on Brooklyn's side and it will help that the Wizards offense looks inconsistent to me, particularly when I saw them in person.
Big shoutout to Thomas for throwing down some words with NetsDaily. You can find him on Twitter, @TheRealTPruitt and, of course, Bullets Forever.