E-Mailing with the Enemy: Houston Rockets

Share All sharing options for: E-Mailing with the Enemy: Houston Rockets

1) The Houston Rockets are currently in second place with a 11-5 record behind the San Antonio Spurs who lead the Southwest division (and Rockets) by 2.5 games. Every season, it seems like the Spurs, despite the lack of razzle dazzle, always sit atop the division by season's end. Do you think that with the addition of Dwight Howard, another year of chemistry between James Harden, Jeremy Lin and Chandler Parsons, that this is the Rockets' year to topple the Spurs?

I wouldn't be surprised if by season's end, the Rockets were ahead of the Spurs, but I wouldn't count on it. On paper, the Rockets have moved past them, with a pair of stars surrounded by capable role players, while the Spurs are aging, but I refuse to count out the Spurs until they knock themselves out. Greg Popovich has done this so well for so long that no doubt that he will continue to exceed expectations, and as long as Parker stays healthy, they should be the favorites to come out of the West.

The Rockets have made some great acquisitions, but it seems like when teams make large changes, it takes about a season for those changes to fully integrate into the team. There are still serious issues with regards to turnovers and defensive rebounding, and until those shortcomings are fixed, I don't think the Rockets will be winning the Western Conference. 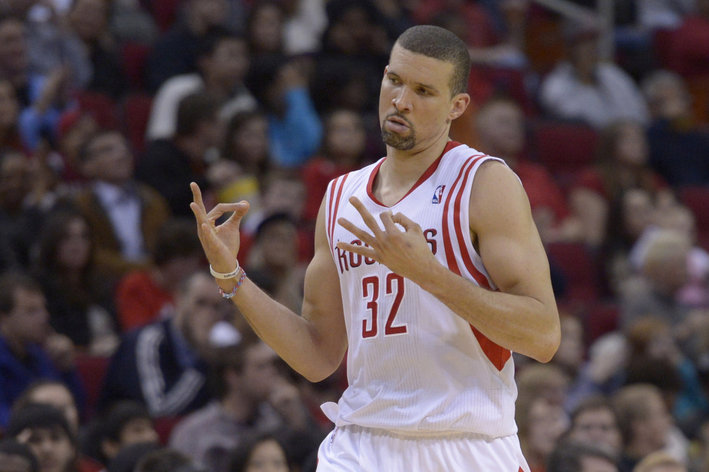 2) Speaking of the addition of Howard, has he been all that Rockets fans have expected? He's putting up the same type of numbers that he has in the past, but how is he fitting in? Howard is taking ever-so-slightly less shots in Houston (10.4) than he did with the Los Angeles Lakers last season (10.7) when he was complaining that he needed more shots. Do you think this will become an issue with the Rockets? He does have a habit of making concessions in the beginning, but then changing his mind.

The one thing that Howard's miserable season in Los Angeles did was that it muted expectations for Howard the player. After hearing so much criticism about Howard and seeing a shadow of his former self with the Lakers, most Rockets fans did not come in and expect Howard to be the monster superstar that dominated games on both ends in Orlando. In the early going, he's somewhere in between his Orlando self and his Los Angeles self. He's grabbing rebounds, he's scoring a little bit, but his post game has struggled immensely and he has turned the ball over a great deal.

From the standpoint of his happiness, he seems to be fairly happy. I think the unhappiness in LA stemmed a lot more from the constant media pressure that comes from such a big market, and now that he is out of the spotlight, he doesn't have to worry so much.

3) During the preseason, there was a lot of noise about Patrick Beverley and how he could eventually supplant Jeremy Lin as the starting point guard and get his minutes as the season went on. So far, Lin has staved off Beverley and producing better all around. However, head coach Kevin McHale has found a nice rotation and splitting the minutes equally at about 30 per game by going small ball. Do you think that Lin's performance thus far will make his a desirable trade chip? Or is his contract too much of a killer for anyone to want? Should the Rockets even consider trading him, if they believe Beverley can handle the lead guard duties? Luckily with Harden's ball-handling ability, there isn't as much pressure on the point guard.

Right now, the Rockets don't really have any plans to shake up the roster with a trade unless it involves Omer Asik. They've made big changes, are trying to get everyone comfortable, and they don't want to upset the balance by trading away a player that by all accounts has thrived in this new system.

Essentially, what the Rockets are doing is limiting the amount of minutes Lin plays on the floor with Harden. The two of them are the team's best playmakers, and by staggering their minutes, they can allow both more freedom when they are on the floor, but also ensure that one of them is always on the floor, improving the bench play immensely. Lin has reacted very well to the move, playing the best basketball of his Rockets career, and there seems to be no reason to shake that up. I think that his strong play would make him valuable to other teams, but the Rockets likely value him too high to make a move at this point.

It is important to note that Lin left Wednesday night's game with an injury and will miss two weeks with a knee sprain, as the team just announced.

4) I'm not the only one who thinks that Terrence Jones should play more, right?

Kevin McHale has come around to your thinking, putting Jones into the starting lineup over the past few weeks and giving him more minutes. After an up-and-down rookie campaign, Jones has truly put it all together in his sophomore season, combining his athleticism, shooting touch, and impressive handle to finally establish himself on the offensive end. On the defensive end, he's playing great help defense and continues to improve in his discipline, staying in better position that he had in the past.

He still has to improve his rebounding, but for a player playing his first significant minutes of his career, it's a wonderful development to see him playing so well.

5) What are a few more things that Brooklyn Nets fans should know and can I get a prediction on the final score?

As I mentioned, Lin is out for the game and Harden is questionable, so the Rockets may be playing down a few men tonight in Houston. If Harden misses the game as well, look for the Rockets to spread it out with a bunch of shooters and rain down threes around Dwight Howard. With Francisco Garcia in the starting lineup, the Rockets are a very potent perimeter shooting team, and will break down opposing defenses with that spacing.

My prediction is that the Rockets take down the Nets 109-95, as the Nets are simply missing even more important pieces than the Rockets. I think we'll see a good game, but the Rockets shooting may be too much for the Nets.

For more on the Rockets, see: The Dream Shake