E-Mailing with the Enemy: Detroit Pistons

Ben Gulker of the great Pistons blog Detroit Bad Boys was kind enough to answer (and ask!) and few questions on the Detroit Pistons and your Brooklyn Nets.

Share All sharing options for: E-Mailing with the Enemy: Detroit Pistons

Josh Smith missed practice, was benched to start the game on Friday night. The question is: we've seen Smith have, um, "issues" with coaches/management in the past; is this something bigger than simply he missed practice? Is there a real concern, especially this early into his contract?

Ben Gulker: Early reports suggest that Smith stayed home (Atlanta) to spend time with his ailing father. Typically, teams don't practice after back-to-backs, and Coach Cheeks didn't announce practice until the plan ride home. Because Smith wasn't on the plane, he didn't know about the practice until the early hours of the morning day of. Smith has apologized to the team, coaches, and management. He's listed as the starter for today's game. At this point, it seems like a simple miscommunication, and that everyone is moving forward.

Man, Kyle Singler played well on Friday night starting in place of Smith. Some, myself included, wondered if a starting frontline of Josh Smith-Andre Drummond-Greg Monroe might be, in cases, a bit redundant. With Singler giving them a different look as a scorer, is there a case to be made that he should be moved into the starting lineup?

BG: Preface: Josh Smith is a very divisive topic among Pistons fans right now, and I am fairly certain I am in the minority.

That said, I believe there is a strong case to be made for bringing Josh Smith off the bench. It's clear that he's not playing well offensively or defensively at small forward. He's never been a consistent long-range threat, and he hasn't had to cover perimeter rotations in several seasons. He's struggling mightily with both of those things. 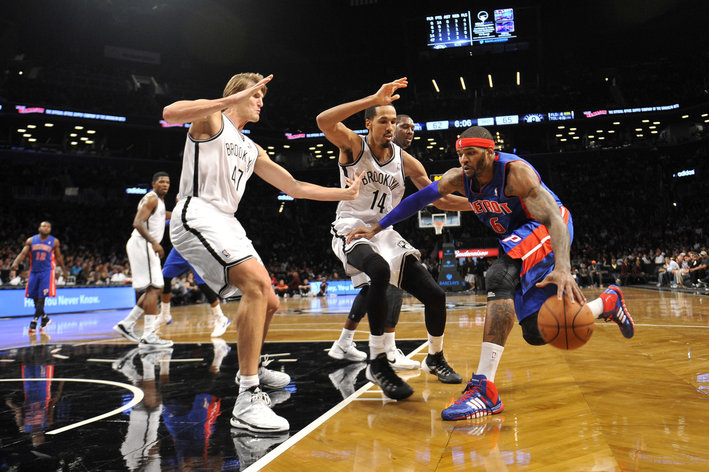 As to whether or not Kyle Singler ought to be the replacement, well, it was great to see Kyle play well on Friday, but up to that point, he had not been playing very well at all. If Smith were moved to the bench, guys like Jonas Jerebko, Gigi Datome, and Rodney Stuckey (sliding Kentavious Caldwell-Pope to SF) would all be in the conversation as well, particularly Stuckey who has played well all season.

We in Brooklyn are battling with reality vs. expectations. How about the fine folks of Detroit? Are you meeting early season expectations?

BG: Definitely not, but not as severely as Brooklyn fans perhaps. The Pistons have a lot of moving parts, and had a relatively difficult opening schedule. I didn't expect them to have a winning record after 10 games, so their record doesn't have me panicking.

That said, two of the most important new pieces - Josh Smith and Brandon Jennings - just haven't fit yet. And that does have me concerned. Both players are playing big minutes, and they're both taking a lot of shots. Many of us hoped that this season would be Greg Monroe's true breakout season, but unfortunately, he simply doesn't get the ball enough for that to happen.

The biggest surprise, however, is defense. The Pistons defense was expected to be top-tier, but it's atrocious. The Pistons have struggled to contain dribble penetration, they appear to have no reliable scheme to rotate to open shooters on the perimeter, the pick-and-roll decimates them, and even inside - where they should dominate - they are being exploited.

What is Brandon Jennings? Is he a scoring point? Can he run an offense, distribute the ball? Looking at his numbers -- as someone who doesn't follow the team as closely as you -- he seems to be unable to decide what kind of point guard he is.

BG: Again, this is a divisive topic, and again, I may be in the minority here, but I think it is pretty clear what kind of player Brandon Jennings is. I would put it this way: he's a ball-dominant point guard. He's the kind of point guard who wants the ball in his hands in order for the offense to make plays.

He's not a floor general who orchestrates a five-man offense, the way Pistons great Chauncey Billups did or current Nets coach Jason Kidd did. That doesn't mean he's selfish. He's a bit ball-hoggy at times, and in crunch time especially he tends to force shots rather than defer, but his assist numbers illustrate that he's a very willing passer. And at times, he has been a brilliant distributor.

But as I've hinted at above, Detroit's offense is at its best when flowing through Greg Monroe, who has the ability to score and create for teammates from the post. Jennings' style of play isn't conducive to that type of offense.

This is where I ask you to ask us a question or two about the Nets -- our diehard readers would love to answer anything you have. So, go ahead, ask!

BG: I'm a stats guy, and Brook Lopez has had a very interesting career by the numbers. His point totals are obviously consistently high, but his efficiency has ben up and down. He appears to have figured it out this season, though. What, if anything, is different?

Obviously, the Nets have an incredible amount of talent, but they're 3-9. What are the two two or three reasons that explain the struggles?

Kevin Garnett is having the worst season of his career. Is he old and washed up? Or is something else going on?

NetsDaily readers, this is where you help Ben out by answering his questions above. Have at it!