E-Mailing with the Enemy: Minnesota Timberwolves

Dennis Velasco e-mails with Eric Goldman from Canis Hoopus about tonight's Minnesota Timberwolves and Brooklyn Nets match-up. They both agree that the T-Wolves will get a jump early. Will the Nets be able to come back? This game could be emblematic of their season thus far.

Share All sharing options for: E-Mailing with the Enemy: Minnesota Timberwolves

Dennis Velasco: Hey Eric... thanks for agreeing to do this! I think that everyone that loves basketball would agree that the Minnesota Timberwolves are one of the more exciting teams to follow in the L. Ricky Rubio, of course, is probably the main reason with his slick ways - 8.8 dimes per game, 2.9 steals and making triples 42.9 percent of the time - all of which are currently career-highs. Of course, he's also hitting career-worsts - 7.9 points and 33.7 percent shooting from the deck. I like think of Rubio as beautiful chaos, which is a very Marvel Comics villain perspective, but I think you know what I mean. How do you see Rubio doing this season, his third in the NBA?

Others players to dig are Kevin Love, whose only roadblock to success seems to be health, a double-double beast with the ability to step out to the three-point line, which is where offseason acquisition Kevin Martin is excelling, hitting 47.0 percent while putting up 5.5 attempts per contest. He's back with Rick Adelman and has to be just as ecstatic, if not moreso, as T-Wolves fans. He's been great for the team! The other new guy is Corey Brewer and he has a knack to fit in anywhere. Tell us how much of an impression they're making, as well as three to five other things that Nets fans should know.
Eric Goldman: Hey Dennis. This should be fun. Starting with Rubio... it's amazing to have a player like him to watch every night. His ability to find guys and get the ball to them at the right moment is pretty rare. He's brilliant in the pick and roll, finding the roll man in space, and in transition as well. That said, the team is actually running less PnR this year as they incorporate a lot of Rick Adelman's corner schemes, so you will see a lot of playmaking from the high post by Kevin Love as well. 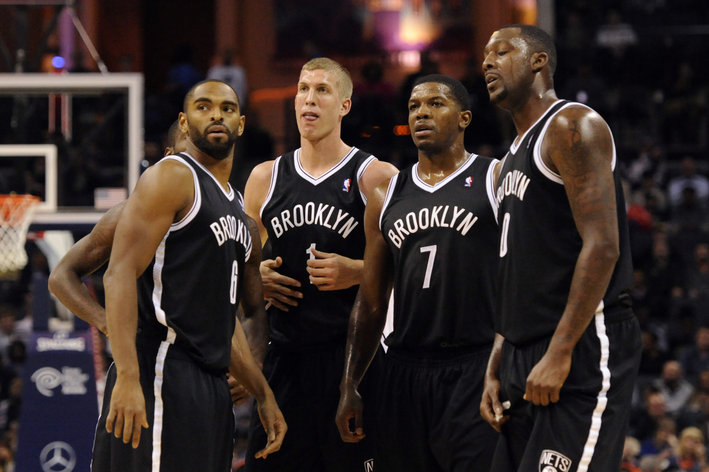 Dennis Velasco of NetsDaily answers questions about tonight's Nets-Timberwolves game.
Rubio is also tremendous at the defensive end; he doesn't get steals by gambling, he just reads plays faster then everyone else. His basketball IQ is off the charts. Finishing has been a real problem for him, though. He hasn't learned how to finish around the rim yet, like other great point guards do. His stand-still three has been good, but his off-the-dribble jumper is poor. Overall, he's great, but there are weaknesses.
Kevin Love is just a flat out superstar. He does it all--rebound, score inside and out (watch for his newly developed jump hook in the post), and he's added passing to his game this year. It's a joy to watch. Kevin Martin is off to a great start, back to his three-pointer/free throw combination that has made him such an efficient scorer in the league. He's been terrific, all the more because it's been probably a decade since we've had a worthy shooting guard on the Wolves. It's been a while.
Other stuff: Corey Brewer is getting out and running, which is what he does well. He isn't as effective when the game slows down and he has to make jumpers. That isn't his game.
Nikola Pekovic got off to a bit of a slow start this year, but the last few games he's been destroying people. When he gets position, that's it. You aren't moving him. And he has excellent hands and good touch around the basket. But mostly, he's just about the strongest guy in the NBA.
The bench has struggled so far for the Wolves. Derrick Williams is pretty much out of the rotation, and Adelman has been going with J.J. Barea (who fluctuates between fantastic and terrible game to game), Dante Cunningham, who is workman-like, and Robbie Hummel, who has supplanted Williams because he doesn't make mistakes.
Things were looking great until the last two games - close losses at the Washington Wizards and at home to the Los Angeles Clippers. Five of the Wolves six losses have been by a combined 15 points.
For more on the Timberwolves, see: Canis Hoopus
DV: The Timberwolves definitely have some top-level talent on the team and as I said, they're an exciting team to watch. Definitely looking forward to watching this game. But, I may not. The T-Wolves should be able to run on the Nets and the Nets have stunk against teams like that. Which brings me to the question - what will Minnesota have to do to win this game, other than the up-tempo game I intimated. And, tell me how it plays out and a final score.
EG: The Wolves will need to do work on the offensive glass. It's an area they are strong in, and they need to take advantage of Love and Pekovic on the boards. That, combined with their running game should be enough to get them through. The Wolves have been great in first quarters this year; I haven't checked, but I bet they have the best first quarter differential in the NBA. My guess is they reprise that against the Nets, and get out quickly. The Nets will get back into the game in the second quarter, but ultimately the Wolves ease away for the win. This is one the Wolves need badly after losing at home against the Clippers, and they will be locked in I think. I'll go 106-99 final score.
P.S.--Kevin Garnett gets a huge round of applause when he's introduced.
DV: There's just so much uncertainty with this Nets team right now - will Brook Lopez play tonight? Deron Williams has to be sitting and not rush back on the court again, right? How serious is Andrei Kirilenko's back injury? And these are only health questions. Forget about any that has to do with actual gameplay. Unfortunately, I have to agree with you, Eric. The Wolves get an early jump and keep it. I'll go with 113-94 in favor of Minny. Now, let me go hide under a rock now and start crying.
Are you as pessimistic? Or the complete opposite and think the Nets will come together and put up the W? Leave score predictions below!