E-Mailing with the Enemy: Charlotte Bobcats

Dennis Velasco and Ben Swanson of Rufus on Fire talk about the upcoming Nets and Charlotte Bobcats match-up that goes down Wednesday night in the Queen City.

Share All sharing options for: E-Mailing with the Enemy: Charlotte Bobcats

Dennis Velasco: Ben, thanks for agreeing to do this. Currently the Charlotte Bobcats are better than the Brooklyn Nets. Yes, I said it, and I honestly feel dirty having done so. Is this real life? Okay, so it's still early in the season, but with a 5-6 record, the Bobcats are better than the Nets' sad and very disappointing 3-7 mark. Charlotte is sitting square in the middle of the Southeast division with solid wins over the NBA Playoffs also-rans Cleveland Cavaliers (twice) and Toronto Raptors, New York Knicks (another NYC area team underperforming) and Boston Celtics on the road. Are you surprised by the team's current record or would you have expected numbers like this?

Thus far, big-time offseason free agent signing, Al Jefferson has only played three games this season, averaging 15.0 points on 40.4 percent shooting from the field, 8.7 boards, 2.3 dimes and 1.3 blocks. Granted, it's a small sample size, but shouldn't the numbers be better than that? And, what happened to Kemba Walker? Just when you thought he was "getting" the NBA after last season's production, he's putting up some really bad numbers, particularly that 32.9 percent shooting from the deck. Yikes. He's not even leading the team in assists (4.3) as that's Josh McRobert's (4.7) joint right there. I would say that despite the team's two best players doing kind of bad or not even having the opportunity to do badder (that's a word, right?), that aforementioned 5-7 record isn't so bad.

What are your thoughts on the above and what are three to five other things that Nets fans should know about the Bobcats?

Ben Swanson: I'm definitely a bit surprised, though I'm well aware of the danger of trusting a small sample from the beginning of the season after last year's 7-5 start. So my expectations for the rest of the season are a bit tempered from this start. Still, with ballyhooed free agent signing Al Jefferson missing all but three games and coming up with a 4-4 record without him, I've been impressed. The team's defense has led the way though their offense still has definite stagnant periods that haunts them late in games when they have a deficit within grasp, but they let it get away. They're not out of the woods and still have some lingering problems they had last season, but Charlotte has made progress so far. 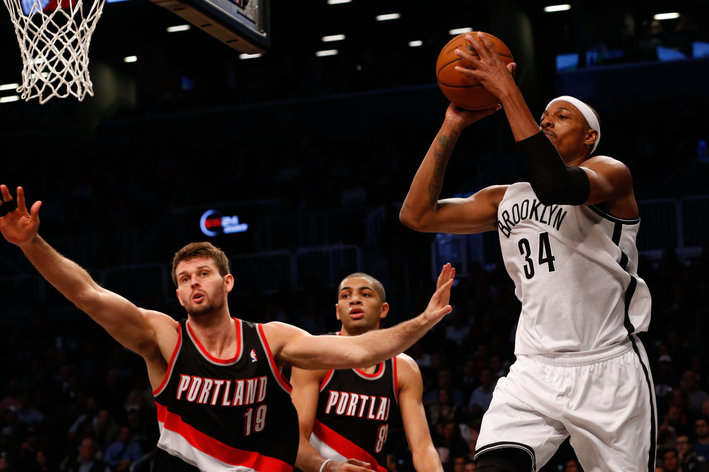 Rufus on Fire previews tonight's Nets-Bobcats game, in which it's the old vs. the young.
I'm not worried about Jefferson's production at this point. He's been fighting a nagging ankle sprain for about a month, so trying to return to the court in recovery against Dwight Howard and Al Horford in two of his three games isn't exactly likely to herald big numbers. Kemba Walker's performance has been much more concerning to me. Granted, it's great that the team has been moderately successful in spite of his underwhelming efficiency, but this has been a bad drop-off so far. He suffered a shoulder injury against the New York Knicks that he has been playing through, and as much as I hope his poor scoring is all due to that contusion, I can't place the responsibility all on it. His shooting has dropped off a cliff since then, and he can't seem to finish at the rim. With any luck, he'll return to form, but one look at his shot charts in the past seven games will send fans to the bottle.
1. This Bobcats defense is no pushover. In past seasons, Charlotte has been a doormat, slow to rotate and lackadaisical in defending the three-point line. This team, despite only a few changes in personnel, is much better thanks to Steve Clifford and his defensive system that has energized the team.
2. Stop Josh McRoberts and you cripple the Bobcats offense. Thanks to the depressing step back in Kemba Walker and Gerald Henderson's scoring and Al Jefferson's absence, Charlotte has one of the least efficient offenses. However, McRoberts has stepped up as a versatile linchpin to hold the offense together at times. Don't let his terrible field goal percentage fool you, his game is much more than just shooting. McRoberts has a decent enough handle on the ball and court vision to move around the perimeter to facilitate ball movement. Add his passing skills to that and you've got the man who keeps much of the Bobcats' offense involved and creates scoring opportunities by opening up cutting lanes. He also has a dangerous three-point shot, which helps space defenses.
3. Keep an eye on Charlotte's small forwards. Michael Kidd-Gilchrist has quietly been having a very solid sophomore season with six games of at least 14 points on efficient percentages even with his broken jump shot. It's a work in progress, but don't be shocked if he hits a mid-range shot from the right elbow. He's also been pretty good on the offensive glass and even creating some offense in isolation. The other small forward is Jeff Taylor, who is coming off a career high in scoring with 20 points against the Chicago Bulls. He's got range on his jump shot, loves to get his offense through defense and creating turnovers, and can finish at the rim. His sophomore season has gotten off to a slow start, but he'll get plenty of possessions and shots to turn things around as one of Charlotte's only shooters.
4. RIP Ben Gordon. Y'all still interested orrrrr...?
DV: I've been a fan of McBob for a while and I'm glad that he's getting some run down in Charlotte, but I guess it isn't too hard to crack that line-up. RESPECT! So, what's up with Bismack Biyombo? I've always been intrigued about his potential, but he's looking like one of those "you can't teach height" type of players. Do you honestly even see any offensive improvement any time in his career? Or is his ceiling an even more offensively-challenged Dikembe Mutombo? Great, now I have that GEICO commercial in my head.

Okay, so let's put on our Hat of Prognostication. What needs to go right for the Bobcats to beat the Nets and give us a final score!
FOR MORE ON THE BOBCATS, SEE: Rufus on Fire
BS: Biyombo's trajectory has been hard to gauge lately. He's got a serious knack for defending the rim, but in past years he's been like a football free safety trying to clean up everyone's messes. As a result, he looked overmatched trying to compensate for the rest of the team's deficient defense. This year has been better so far. He's not blocking shots as well, but he's still exceptional at it and I think those will come back to his career averages once we get further into the season. His hands look better and he hasn't been as big a liability on offense because the Bobcats haven't been trying to force anything to him. As a result, he's scoring at a better rate. Even scarier, his free-throw shooting has looked much improved. I don't want to overstate it on a mere 22 free throw attempts over 11 games, but his form looks a lot smoother.
As for his general skills on offense, I'm not sure we'll see anything more than a decent hook shot from him. Biyombo can catch passes in traffic (if given a decent dish - he can struggle with handling low passes) and throw down some monster dunks, but his post game isn't anything to watch. He tends to hesitate on offensive moves or on offensive rebounds, leading to worse shots as the defense recovers. The Bobcats didn't draft him to give them much offense, but hopefully he can eventually contribute 7-9 points a game. Don't expect him to develop into Olajuwon.
For the Bobcats to win, they'll need to again hang their hat on their defense. They've done well rotating in the paint to shut down shots at the rim, and if the Nets are once again without Brook Lopez and Deron Williams, that probably won't be too big of a problem. That just leaves perimeter defense, but with Joe Johnson and Paul Pierce, that could be an issue. On the other side of the court, the Bobcats will need to get their three-point shooting going to space the floor. If McRoberts can pull Garnett out of the paint, that should free up some space for the Bobcats to get to the rim. However, the Bobcats' offense has yet to prove it can do either of those consistently.
The Nets have been pretty dreadful on defense, though. They tend to foul a bunch and aren't great on the glass. Considering the Nets' injuries, lackluster defense and inconsistent offense, I think I'll go with the Bobcats. Of course, the Bobcats could make me look very stupid and completely crap the bed on offense. Still, as odd as it feels to say -- and a month ago I definitely wouldn't have felt this way -- I think they can eke out a win on the back of their defense. As for a score, I think this will be a low-scoring affair. I'm thinking 89-86.
DV: Thanks for the great words on the Bobcats, Ben. You're definitely one of the reasons why I wanted to do a feature like this - great insight. Well, news recently broke that Williams will be playing tonight, so that should bode well for the Nets. Bropez is still up in the air, which stinks, but if Andray Blatche can face up his man and drive to the basket instead of taking an ill-advised long two or triple, then the Nets should give some fits toward the Bobcats defense. We're all still waiting for that elusive game when things just click for the Nets, but that is likely something that happens further down the proverbial road.
I think the loss to the Portland Trail Blazers and the actions of the Nets players became a low enough point in the season for the team to start to turn things around and it will be the Bobcats that go for that spin. Nets win 102-90.