Share All sharing options for: Shaun Livingston has been a big bright spot for the Nets this season

Shaun Livingston and his long road back to the NBA has been well-documented. He was a highly touted high school prospect that suffered a catastrophic knee injury. Today, he is lucky to be walking let alone playing basketball at the highest level.

Livingston has spent the last several seasons on the bench still trying to get fully healthy from his 2007 injury. This year, he's not only gotten close to his superstar potential but he's put his best numbers ever, before or after the injury. And he has arguably been the Nets most consistent player.

Livingston has kept the Nets going while Deron Williams has dealt with a sprained ankle in the preseason, and again this week, when he suffered another. D-Will is back Wednesday and Livingston will head back to the bench. He's done well. The numbers show it. With Williams on the floor with the other 4 starters, the Nets have a net rating of -1.8, and shoot an average 43% from the floor. When Livingston starts as point guard, the team has a +4.5 net rating and they shoot a fine 50%.

In particular. his length is a problem for smaller point guards. Livingston gets to the rim often against his smaller defender, taking 33 attempts from inside the restricted area, more than any other area on the court. He makes nearly 60 percent of them.

That's not all, though. 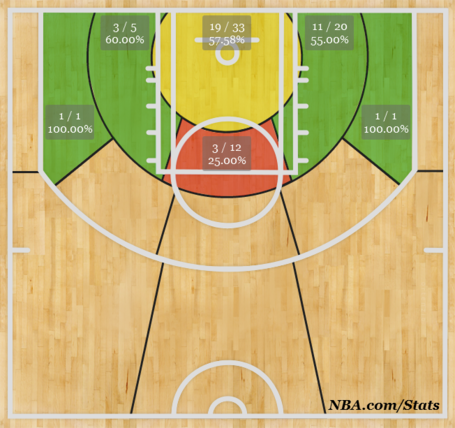 Taking a look at Livingston's shot chart, he has used his height to his advantage across the board, running an efficient game. Livingston has not yet taken one deep two beyond the elbow extended. Livingston isn't known as a three-point specialist, shooting just 20% from beyond the arc for his career. In fact, he hasn't taken or made one since February 17, 2012! A wise decision.

Livingston's length also helps on defense. In addition to his 6'7" height, Livingston has a 6'11" wingspan. Many guards have had trouble driving by him or pulling up for a jumper with him closing out. Monday night, Livingston did have some trouble with Damian Lillard, though. The Trail Blazers used a lot of pick-and-rolls to try and get Lillard free from Livingston, which worked at times, but when Lillard had Livingston's wiry arm in his face, he would take a poor shot. He may not be a lockdown defender, but with such undersized point guards in the league today, Livingston takes away much of their perimeter game when he can keep a hand in their face, and stay in front of them.

Livingston, along with Mason Plumlee and Alan Anderson, has been a big positive this season for the Nets. Not bad for a guy who on a night almost seven years ago many believed had lost a promising NBA career and almost lost his leg. But he is now playing high level basketball once again. (And don't forget he was cut by the Wizards last season!)

Stories about his knee are being replaced by those about his success . He's been explosive this season, wrapping around defenders in the paint for a beautiful finish, or throwing it down on Robin Lopez.

Still, the stories about his knee and the injury will form a touchstone for his future success. Ralph Lawler, who broadcast the game when Livingston got hurt, told Jonathan Abrams of Grantland last winter about his recovery. "The fact that he's walking without a limp, playing the game at the highest possible level - whether he's no more than a journeyman, is still remarkable. What he could have been, we'll never know."

Now, he's giving the league a little look at what he could have been ... in Brooklyn.