Dennis Velasco asks Blazers Edge Editor, the awesome Dave Deckard, five questions about the Portland Trail Blazers before tonight's match-up between the Blazers and the Nets in Brooklyn.

Share All sharing options for: E-Mailing with the Enemy: Portland Trail Blazers

1) Currently, the Portland Trail Blazers are 8-2, in first place in the Pacific Division and have won six games in a row. They've even beaten one of the two only teams to be 9-1 in the San Antonio Spurs. Is this start to the season a surprise or was the schedule favorable to the team?

A little of both.  The Blazers haven't caught many teams that can take them out of their style of play.  Boston didn't have enough offense, Toronto not enough defense, Sacramento not enough anything...you get the picture.  Even San Antonio played semi-uninspired ball in that game in Portland.  However the Blazers are beating the teams they need to beat and for the most part doing it legitimately.  Having 3-4 unselfish three-point marksmen on the floor at the same time makes the lineup hard to defend.  At some point during each game the threes have started falling and that's made all the difference.

2) Last season, the Blazers had a -3.2 points differential, but have a +4.9 this season. What do you attribute the huge swing to? Is it just another year of having a core of LaMarcus Aldridge, Nicolas Batum and Damian Lillard together and building on last year's chemistry? 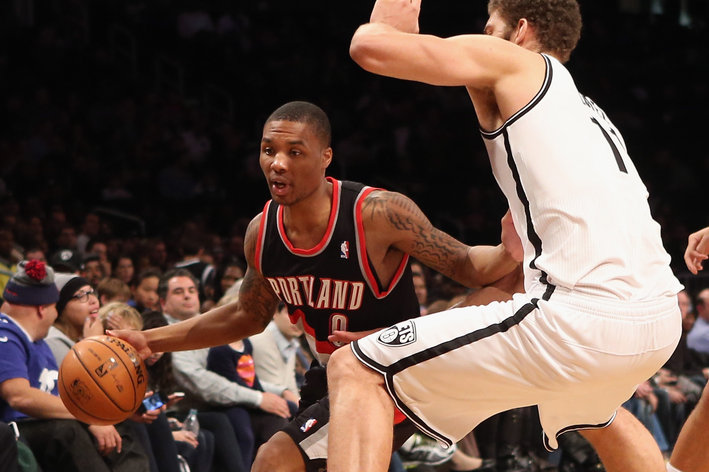 In part it's a tribute to the efficiency of the three-point attack.  In part it's a credit to the poise, cohesiveness, and team play up and down the roster.  But you also have to factor sample size in there somewhere.  The Blazers won't end up at -3.2 this year but they have to earn that +5 over 82 games before it becomes real.

3) How has the additions of Robin Lopez and Mo Williams been for the team? Last season J.J. Hickson didn't do much defensively in the interior for the team and, certainly, Lopez had to have helped there. Williams is fairly versatile at the guard position and seems to have found a solid groove with the team. Can you elaborate on their contributions?

Lopez is less stats-oriented and more team-oriented than was Hickson.  Lopez will do the little things with that big body: set a screen, rotate, tip a rebound he doesn't have much of a chance of getting himself.  He's not a great individual defender.  Opposing centers are regularly making mincemeat of Portland's interior defense, as are most penetrating guards.  Lopez is willing but he's just a little slow and not intimidating at the point of defense.  But when he's out there working hard it makes the work from the other guys pay off more.

Williams has been on a hot streak, which means Williams has been great for the Blazers off the bench.  Last year Portland's reserve couldn't score if Michael Jordan and Wilt Chamberlain lifted them on their shoulders and escorted them to the basket.  Williams doesn't have that problem.  He's been the Maestro of Mid-Range for Portland, pouring in points when his fellow bench players have struggled and when Portland's offense has stalled.  You can probably attributed one or two wins to Mo getting the offense out of neutral.  Everybody knows Williams is streaky and that eventually the Blazers will pay the tab for his shooting ways, but right now they're feasting.

4) I've spoken to a good number of Blazers fans and almost all of them had zero faith in head coach Terry Stotts. Is he doing anything differently this early in the season? Or is it just the players succeeding despite their coach?

Most Blazer fans I've spoken with have appreciated Stotts' work.  People are muttering about the defense but I'm not sure this group is stocked with natural defenders.  You have plenty of holes in the backcourt and Lopez might be overrated a tad.  The offense so far has been a thing of beauty.  Plus the team is 8-2.  If there's complaining, it'll have to wait.

5) What else should Brooklyn Nets fans know about the Blazers?

Attack the paint and attack in transition.  Those are the points at which the Blazers are vulnerable.  Contest three-point shots at the other end.  Threes are Portland's only lifeline right now.  That said, few teams have managed to do enough of both in the same game to come out with the win.  You have to bring a better quality game to beat the Blazers this year than you used to.

For more on the Blazers, see: Blazers Edge