Share All sharing options for: E-Mailing with the Enemy: Los Angeles Clippers

Dennis Velasco: Clipper Steve! Thanks for doing this and forming our very own Blog City! Yeah, that was corny, but I'm okay with that. Ha!

The Los Angeles Clippers are tied for first place in the Pacific Division with the Golden State Warriors and have looked very good of late, winning three in a row, and more importantly for our purposes, a perfect 4-0 at home as the Brooklyn Nets roll into town. As of this writing, it's uncertain if the Nets' Deron Williams will be able to take the court after suffering a sprained ankle in the first quarter of last night's contest with the Phoenix Suns. So, a D-Will versus Chris Paul match-up may have to wait until the team meets in Brooklyn on December 12th, but there are other intriguing match-ups to watch, such as Brook Lopez, methodical and steady, versus DeAndre Jordan, athletic and crazy athletic. How do you see that bigs match-up on the inside. Also, people are saying that Blake Griffin has improved, but very little compared to his rookie season, is there a higher ceiling for Blake? What are three to five other things that Nets fans should know about the Clips?

Steve Perrin: Hey Dennis. It's my pleasure. And yes, that was corny, but at least you didn't call us Blob City (yes, I do need to get into the gym a bit more, get off my back!). 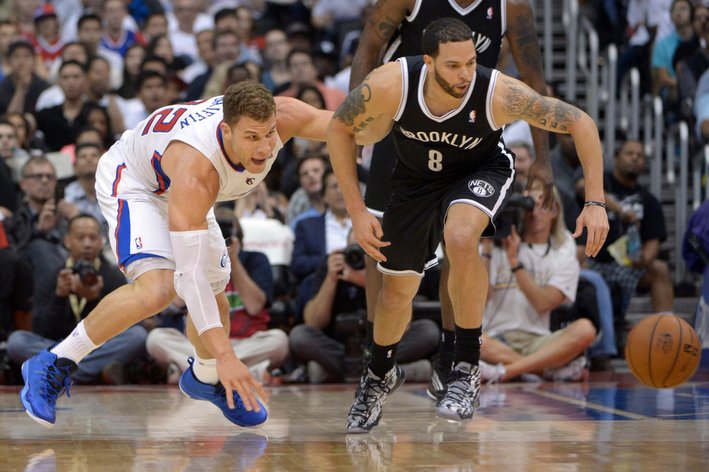 The Clippers have looked great at times this season, and not at all great a couple of times as well. They've generally risen to the level of their competition, and in fact are 5-1 against teams with winning records, but only 1-2 against teams with losing records. That might bode well for the Nets and their 3-5 mark -- except they're the Nets, and they probably have the attention of the Clippers, despite their poor start. And yes, they've been very good at home, with all four of their wins coming against Western Conference contenders.

DeAndre Jordan has been better across the board this season, and he's made particular strides on defense, but it may not matter much against Lopez, who has shot over 60% in his career against the Clippers. And I'm not talking about a bunch of dunks -- that's 60% on his usual array of 18-footers and tough jump hooks. He's really owned the Clippers since coming into the league for whatever reason, so it's going to be a challenge for Jordan to try to contain him. Of course, DeAndre can try to use his speed and athleticism to get some back also, getting out on the break and finishing lobs at the rim over the more earth-bound Lopez. So long as Lopez doesn't dominate the match-up, it will be a minor win for the Clippers I'd say.
Griffin's improvements from his rookie season are somewhat subtle, but pretty apparent to those of us who watch him frequently. Kevin Arnovitz of ESPN actually had a very good piece on it this week. Blake's big numbers in his rookie season came in a pre-Chris Paul world, where he was counted on to do more, and his work rate to get his numbers was just absurd -- unsustainable really. With Paul taking on the top dog role in L.A., Blake's raw numbers have suffered some, but his game has matured in the process. He shoots a much higher percentage, he's a much better passer than he's given credit for, and his jump shot is steadily improving. The scary thing for the league is that he is still pretty far from his ceiling -- his post game still needs work, and his jumper will continue to improve -- but even if he's not there yet, where he is is already awfully darn good.
Here's what you need to know about the Clippers:

1) Chris Paul is pretty good. You already knew that. But it's important. So I'm telling you again.
2) The defense under Doc Rivers has been bad -- even terrible at times -- and the Clippers are currently 28th in the league in defensive efficiency. But it is getting better. Recent second half comebacks against Houston and Oklahoma City -- two very good offensive teams -- were triggered by the defense.
3) The offense on the other hand has been very good, reaching a sort of perfect storm level a few times. Adding a shooter like J.J. Redick next to Paul gives the Clippers, a team that already had a lot of weapons, the ability to spread defenses out, giving Paul even more room to operate. When they get going, watch out.
4) The bigs off the bench for L.A. this season have been dreadful; the Clippers would kill for an Andray Blatche or a Reggie Evans. They'd probably take a Mason Plumlee or a Mirza Teletovic for that matter. Right now, they have to play small a lot and ride Griffin and Jordan for long minutes. If either of the starters gets into foul trouble, it's an issue.
5) Partly because of the terrible reserve bigs, the Clippers second unit has been very bad. However, both Darren Collison and Matt Barnes are starting to show signs of emerging from slow starts, so that will help.
Nice win in Phoenix last night. I have to say that I'm thrilled to see former-Clipper Shawn Livingston doing well.
For more on the Clippers, see: Clips Nation
DV: Hey, I would get off your back if it wasn't so fat and spread out all over the place! Just trying to help motivate you, Tubby.
Yes, Livingston has been huge for the Nets, particularly in Deron Williams' absence in the preseason and obviously last night after D-Will went down. You'd have to be somewhat of a jerk to ever sincerely root against S Dot.
I totally agree about Blake and his need to develop his post game. If he did that, he'd really be ridiculously good and have something to fall back on after his athleticism falls off ten years from now. Man, that must be nice.

Anyway, let's finish this off. How do you see the outcome of the game and give me a final score!
SP: See, that's where my game is resistant to the effects of age. I never, ever had any athleticism, so I had nothing to lose.
As I mentioned, the Clippers have been very good at home and they've been very good when they've taken the opponent seriously. I think they'll take the Nets seriously -- not to mention that Brooklyn is coming off an overtime game the night before. Basically, if the Clippers were to lose this game, given all the other factors, you'd have to put it into the 'bad loss' category -- I don't think it's going to happen. Clippers 112, Nets 99.
DV: The Nets are on a high right now after their first road win. D-Will may not play, which seems likely considering his issues in the past, but S Dot has been relatively amazing when he's had to play extensively. Hopefully the Nets will continue to feed the beast in the box and Brookie Monster goes off again. If he can get some early success and get DeAndre Jordan in foul trouble, the Nets could easily win the inside game. However, respect to CP3, who could tear up the Nets' D and could easily take advantage of Lopez should he pop out to defend him with either a blow-by or a lob to DAJ or BG32. I think it will be a close game, 109-105... Clippers, who are well-rested and at home. (Sad face)
Thanks for throwing down some words and wisdom, Steve. Now get to the gym!