E-Mailing with the Enemy: Sacramento Kings

Dennis Velasco corresponds with Steven Covella from Baller Mind Frame and its Sacramento Kings blog about the team from Sactown.

Share All sharing options for: E-Mailing with the Enemy: Sacramento Kings

Dennis Velasco: Hey, Steven... thanks for agreeing to throw down some words about your Sacramento Kings. As we all know, recent events with the team had many people wondering if the Kings would even be in Sacramento this season or, in all probability, in Seattle as the SuperSonics. Luckily for the basketball-loving citizens of Sactown, the Kings stayed and new ownership (see: Vivek Ranadive) seemed to be committed to winning and usher in a new era for the franchise. Thus far, it's been disappointing as the Kings head into their match-up with the Brooklyn Nets sporting a 1-5 record. The Nets themselves aren't doing much better at 2-4. However, expectations are on polar opposites sides.

FOR MORE ON THE KINGS, SEE: Sactown Royalty

DeMarcus Cousins, after signing a hefty extension is fulfilling his promise statistically, averaging 23.5 points while shooting 49.1 percent from the deck, grabbing 9.7 boards and even leading the team in the defensive stats - 2.2 steals and 1.2 rejections. I have a lot of hope for newly acquired point guard, Greivis Vasquez, but he seems to be starting off slow. However, that just may be more of a reflection on how well Isaiah Thomas is playing, which is a bit surprising to me. Can you give us your feelings on the aforementioned players, as well as rookie Ben McLemore who seems to be doing better with each game? Also, who else or what else should Nets fans know about the Kings?

Steven Covella: Hey, DV. Thanks for having me.

The City of Sacramento exploded with joy after the results last spring, even packing a local park with 15,000 people (more than the team's average 2012-13 attendance) to celebrate. Between then and Oct. 30, anticipation grew more and more as reports of new additions rolled in throughout the offseason. The home-opener against the Denver Nuggets was electric and seemed to back up the feeling of optimism fans had entering the season, but things have taken a turn for the worse since - the Kings are on a five-game losing streak entering tonight's game.

The team looks lost out on the floor, struggling on both ends. They haven't been knocking down shots lately, opponents have eviscerated their defense and Michael Malone has already had enough. After Saturday's loss against the Portland Trail Blazers, Malone vowed there would be changes, suggesting tonight will be the unveiling of a new-look starting lineup.

As you alluded to, despite Sacramento's lackluster start, some players have turned in impressive individual performances, starting with the franchise's cornerstone, the recently extended Cousins. In just six games, he's lived up to his new contract and status, showing promising signs of progression. He's done a bit of everything to start the season; he dominated the post against the overmatched Nuggets, and when he hasn't been effective with his back to the basket, he's knocked down mid-range shots with relative consistency and gotten looks in the paint using pick-and-rolls and off-ball cuts. 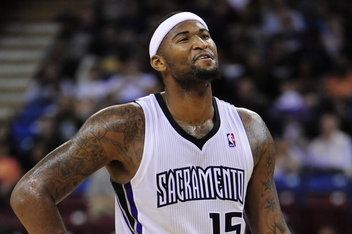 As for Vasquez, I think it's still a matter of getting used to Malone's system and becoming more comfortable with his teammates. He missed almost all of the preseason with an ankle injury, forgoing him the opportunity to establish that rapport before the regular season. Some games, in which Thomas has gone supernova, Vasquez has been benched, but really, the two play together quite well because of their opposite styles and builds.

One thing I can say about McLemore is that he's looked poised in the first six games. He hasn't been affected by the stage or the moment (not that Sacramento has had many), and his energy has helped spark some late-game comebacks. His shot is as beautiful as advertised in the draft - it's compact and he has a very quick release, not to mention the confidence to keep shooting. He's still got a way to go before he becomes comfortable and consistent, but he's off to a good start.

Two players for Nets fans to look out for are Travis Outlaw (an old favorite, I'm sure) and Patrick Patterson. When those two are on the floor, Brooklyn is almost guaranteed to go on a big run. In all seriousness, though, I think Chuck Hayes could give Brook Lopez some problems for short stretches, and expect Jimmer Fredette to get some run.

DV: Oh lawd! Travis OutLOL... a player that shall forever live in infamy among Nets fans and the necessary victim of the one-time amnesty clause. Oh, man. I'm just shaking my head right now. In any case, what do you anticipate this new Kings line-up to be? As I picked McLemore to be the NBA Rookie of the Year before the season, I'm kind of hoping that he's part of that new look and get the start for the Kings, as well as more burn on the court. And, you mention Fredette, a former NCAA Player of the Year, which I'm sure many people forget. How do you see him doing this season as he seemed to be a bit more dedicated this offseason. In many ways, he could be symbolic of the team - formerly successful, meeting a downturn and having the possibility of returning to prominence. Well, at least more relevance.

So, let's get down to it - What do the Kings need to do to win? How do you see the game playing out? Final score?

SC: Unfortunately, the Kings can't amnesty Outlaw for a second time. But, in spite of the shame leftover from the previous regime's signing of him, there's a chance we could see a starting lineup featuring Outlaw at small forward. Malone said every spot aside from Cousins is up for grabs and, while Salmons hasn't been completely terrible, something clearly needs to change. The other option is Luc Richard Mbah a Moute, but it's hard to say whether or not he can crack the lineup since he's already missed a lot of time nursing an injury. I could get behind a forward pairing of Outlaw and Mbah a Moute considering how disappointing Patterson and Jason Thompson have been, though.

Your prediction is going to stand a far better chance starting tonight, as I think it's almost a forgone conclusion that McLemore will replace Marcus Thornton at shooting guard. Like I said before, McLemore has shown poise and energy in the time he's been on the floor, while Thornton has been a big letdown. The "Bayou Bomber" is shooting an abysmal 33.3 percent from the field and only 27.6 percent from distance (YIKES). Making matters worse, Thornton's the kind of player that let's offensive failings affect defensive effort, so you can guess how that's been turning out. Malone was candid Saturday, calling out players' mentalities and efforts; I think Thornton, Thompson and Patterson were some of the guys he was alluding to.

As for the point guard spot, I think Malone likes Vasquez's attitude, pass-first style and having Thomas to turn to off of the bench, so I don't see that spot changing.

Finally: Jimmermania. I see the Kings using much more of Fredette tonight in response to Malone's threats of change, but his days are likely still numbered in Sacramento. It'd be nice to see the Kings trade Thornton and his sizeable contract, opening up playing time for Fredette, who can play in this league, but if that doesn't happen, he'll be traded by February. Sacramento's front office didn't pick up his option, possibly indicating his time is up regardless. Still, he has a smooth shot and the ability to heat up and impact the game.

I think the lineup changes make the Kings more watchable, but the end result stays the same: Sacramento 96, Brooklyn 105.
DV: My worry is that this is yet another young team that can run, the type of team that the Nets have had trouble with early this season. I'll be excited to see what McLemore does, as well as Vasquez, two players I've been following and will continue too. My appreciation of their skills aside, I think the Nets get back on track on track the expectation super highway and get a win in their first of a three-game road trip. Nets 115, Kings 92. BROOK IT! (Props to Ian Eagle).