The Nets are having growing pains. They are trying to build chemistry with a revamped roster while also trying to find the right lineups that make their players most effective.

In spite of this, the Nets 5 core players are still expected to produce. Joe Johnson and Brook Lopez have done their part through 6 games, and Paul Pierce has done so as well to a certain extent. Deron Williams is still working his way back from an ankle injury that made him miss all but one preseason game.

Then there is Kevin Garnett, who has been underwhelming to say the least.

Garnett was supposed to anchor a Nets defense that was a little more than average last season, allowing an average of 95 points per game, but allowing their opponents to shoot 46% from the floor, near the bottom of the league.

Through 6 games, KG has not been the defensive enforcer Billy King brought him to be. The Nets' opponents are scoring more 100 points per game even though they are shooting a bit less than last year's number, 44%.

Do all the Nets defensive woes fall on KG? No. But, his defense is renowned by many, and it has been suspect this far.

Last night, for example, KG had some trouble defending David West. Sure, West is a fine power forward that can play both in the paint and from the foul line extended, but KG should be able to contain him, or at least slow him. One play in the third quarter saw Roy Hibbert screen Garnett which opened up West for an elbow jumper. Garnett, a fundamentally sound defender, tried to fight through the 7'2" Hibbert. That led to him bumping Brook Lopez as well. By the time he closed out on West, the ball was in the air.

Two minutes later, Paul George drove along the baseline. Lopez was the closest help defender, so he slid down to stop George's pursuit to the hoop. Garnett came to supply even more renforcement. This was unnecessary because George already picked up his dribble and it led to an open West foul line jumper.

These are just two small examples of Garnett's defensive issues this season. He has not closed out fully and has been a mediocre rebounder. Garnett is averaging 6 rebounds a game, but when one watches the film, one see's that when there has been contact with his opponent, he hasn't won many battles. SportVU data shows only 1.8 of Garnett's rebounds count has been contested (where an opponent is within 3.5 feet of the rebound).

Defense has been a huge thing for Garnett because that is where he was supposed to make his biggest impact and he hasn't lived up to his calling. His offense has been worse.

KG is averaging six points per game and has yet to break double digits in a game. He is shooting 32% from the field and that could be due to his shot selection. Only 22% of his shots have come inside the restricted area, but when he does shoot in there, he is shooting 3-of-12. He simply needs more shots in the restricted area. The more he takes that close, the more likely they are to fall. 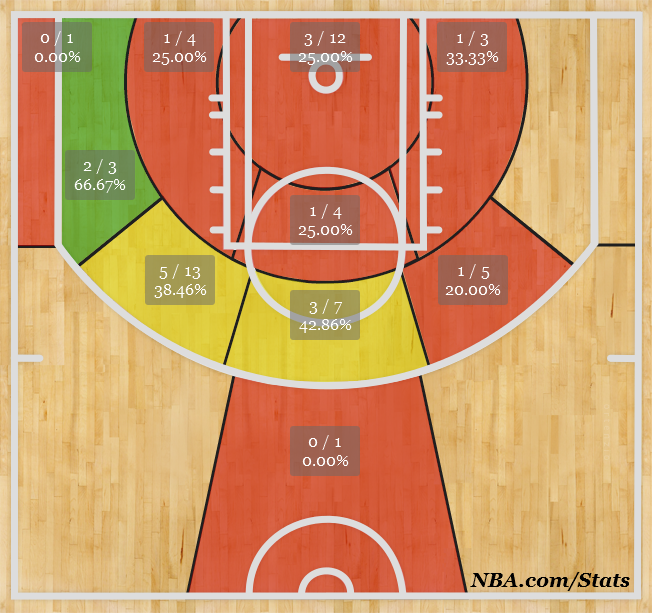 Yes, Garnett is a fine perimeter shooter, just inside the 3-point line, but this season he has taken too many shots out there. More than 50% of his shots have been taken from the foul line extended to the short corner, and he has hit on under 40% of those attempts.

Will those mid-range shots eventually fall? Yes, but Garnett shouldn't find himself out there that often. It's a bad habit for him to take those shots. He is better off taking more shots in the paint. There's been a lot more KG settling for jumpers rather than calling for the ball in the post. Friday night in Washington, of Garnett's 11 shots, he took, eight of them came from the top of the key. Only two of those 11 shots came from inside the restricted area.

Garnett is a rare breed of a power forward, standing 7' tall. Certainly one of the tallest power forwards in the league, so why hasn't he been taking advantage of his size and work his way down for a more efficient shot? That is unknown. It's plausible that Garnett doesn't want to get in the way of Brook Lopez. Lopez is even bigger than Garnett and is a volume scorer. The paint may just be too small for the two big men, but Jason Kidd should find a way to get Garnett more looks inside the paint for him to find his scoring touch once again. Once Garnett gets his post game going, it will become easier for him to hit his 17-foot jumpers. Those jumpers will be stand-still jumpers, rather than 2 dribble, turnaround jumpers, which has been a frequent shot for KG this season.

KG's days of being a go-to scorer are over. These past six games haven't made it easy for anyone that supports that statement, but this is not the KG that will be around for at least the next 76 games. Garnett is a motivated player and a perfectionist. How does he deal with his poor shot selection and his lackadaisical defense, and correct it?