Share All sharing options for: Indonesian fans get surprise visit with Jason Kidd

Hendrick Agosto is an electrical engineer from Semarang, a port city in Indonesia, and a huge Nets fan. This month, he and his friend Ryan flew to New York for the first time, staying in a Willamsburgh hostel. They came to see the city but more importantly visit Barclays Center and watch the Nets play three games. The big draw: seeing Jason Kidd coach the team.

Two days ago, Hendrick wrote us, describing how he became an NBA fan ...and eventually a Nets fan. After Michael Jordan retired, Hendrick began watching Kidd, who quickly became his favorite player.

"I was impressed so much by our own Jason Kidd I decided to follow the Suns. His trade to the New Jersey Nets really shocked me at first, as i felt that he got traded to a weaker team. But oh what a season that was, back to back trip to the finals, i became a diehard Nets fan. Even after his trade away to Dallas, my heart has already sets for life with the Nets. Although there are more miserable moments at that time being a Nets fan, i can say that being loyal and a true fan certainly paid off right after Prokhorov saved the Nets and move them to Brooklyn. And the Jason Kidd hiring? Talkin about how it came to a full circle..."

He just wanted to meet us. but we felt such loyalty, not to mention such travel, deserved something special. So, working with Irina Pavlova, President of ONEXIM Sports, who's done this kind of thing before; Leo Ehrline, the chief administrative officer of the Nets, and Jenn Cerreto, Jason Kidd's executive assistant, we arranged a surprise.

After a quick behind-the-scenes tour at Barclays before the Pacers game, Ehrline told the two there was someone else who wanted to meet them and opened a door to reveal Kidd himself. After catching his breath, Hendrick told Kidd that he was the reason why a teenager in Indonesia became a Nets fan. Kidd spoke with the two, thanked them for the loyalty to the team, promised to get in touch whenever he and the team go to Southeast Asia and posed for pictures. Hendrick called the experience "surreal." 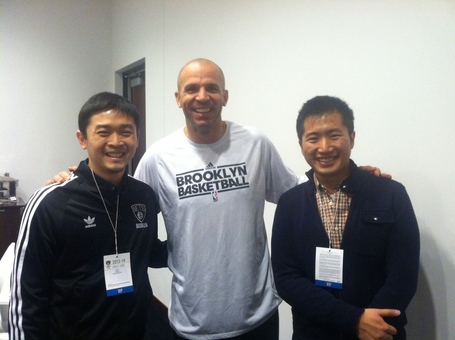 After that, we grabbed them for an interview with Dexter Henry who asked about the trip, the game and the meeting with Kidd. The whole experience was a great moment for the two travelers who head back to Semarang next week.

Thanks to all who made this possible notably Irina Pavlova, Leo Ehrline, Jenn Cerreto and of course, No. 5 himself, Jason Kidd. For the Nets, it's all about acting locally, thinking globally and this was a good example of that.