A Guide for Celtics Fans: How to Diversify your Emotional Portfolio

Below, an offering for Celtics fans suffering an identity crisis on how to navigate a basketball break-up, and the first few baby stumbles towards uprightness. Get ready to enjoy the emotional stability of a schizophrenic -- ping-ponging from feelings of resentment, to sustained periods of bleakness, to concentrated but ephemeral bursts of hope, and back.

Share All sharing options for: A Guide for Celtics Fans: How to Diversify your Emotional Portfolio 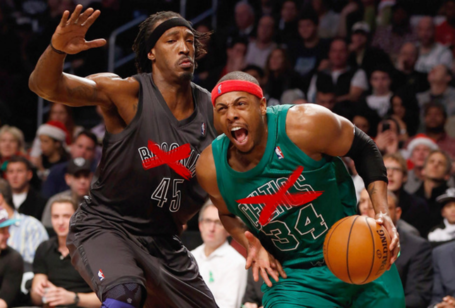 Every year, when the season still smells of freshly cut grass and optimism is flowing on tap, I hop from NBA League Pass channel to NBA League Pass channel, scouting teams and hoping one jumps out of the frame and wraps its long wingspan around my neck. Every year, I fail to find a proper understudy for my Celtics. Until it happened: on June 27th, Paul Pierce and Kevin Garnett, staples of a proud franchise -- and once thought to be as immutable as the bronze statue of Red Auerbach in Fanueil Hall -- were dispatched to Brooklyn for an I.O.U. note, likely only to reach maturity in 2015. Just like that, the Celtics turned into the Bobcats (minus the stain of perpetual disrepute), and the Nets became, well, the Celtics. It seemed only sensible to make room for the Neltics in my stable of teams.

Paul Pierce has repeatedly assured fans that there will be tears when the team faces Boston in its first matchup at The Garden since the trade that momentarily shook the NBA universe. (Pierce is making the trip tonight, but for spaghetti slurping purposes only.) This is not hyperbole, nor do I expect it to be of the dab-my-dry-eye-with-a-kleenex variety. My desktop wallpaper reminds me of this; quivering lip, all pride and finally able to exhale a "me too", it captures Pierce with warm tears streaming down his face after being saluted by a long line of Celtics greats on his way to hoisting #17.

By all appearances, Pierce has quickly embraced New York City after the initial culture shock. It didn't take very long for the wounded dog quality he was stricken with during his first press conference in Brooklyn to give way to that customary, glinting Pierce mischievousness that fans in enemy territories around the league naively mistake for villainy.

At Media Day, Pierce was asked if he expected Celtics fans to become Nets fans through some principle of fandom transitivity. Pierce retorted with a cheeky "I don't know about Celtics fans, but I think Paul Pierce fans might." Since recovering from the catatonic shock, Celtics fans have contemplated, if not tepidly embraced the idea of purchasing a Nets' insurance policy. Your team bows out disgracefully in the playoffs? Easy. Tune the channel to Team B and you've earned yourself a 1UP. Your team is owned by a megalomaniac blessed with a Walter White clarity of judgment? Take a Citi Bike across the bridge and ride into the Barclays Center to sample Brooklyn's fare. Sooner or later, the Nets had to field a team that could entice gypsy fans from neighboring cities to make the pilgrimage in garlanded vans and set up camp in Brooklyn, for this season and beyond. This is that team.

As for KG, there is a finality that seemingly accompanies every stately step of his career. You get the sense that the past is the past and that the future starts the moment he graces a new locker room -- simultaneously striding into the role of team shape-shifter, media punkster and sideline push-up enforcer. Just like his refusal to dwell and suck on the emotions of events past, whoever or whatever the Nets were before his arrival seems like a distant and frankly, negligible memory, destined only to be reeled out in twenty years time by Pro Hoops History for an eager generation of fans to consume.

Fans with harrowing visions of Greg Minor, Pervis Ellison and Dino Radja dancing in their minds have had a more difficult time finding their footing. The "It's a Business" mantra may be endemic to the player ranks -- wound up by agents to express an auto-tuned melody -- but it is nowhere to be found in the fan PR kit.

There is no pamphlet on how to be a fan. It's a no holds barred confluence of rousing, sometimes pathetic, other times heartwarming manifestations all wrapped up in one bizarre spectacle of community. Basketball is an outlet for uptight lawyers to surrender their professional personas to the low lows and higher highs that trace the contours of a regular season; for all those short, bald, slow, lithp-afflicted loothers in high school who couldn't dream of cracking the podium but found that the support of bleachers and booming acoustics of a gymnasium lent their muffled grievances a forum they had never before even been able to buy. See, you don't need to know the rules to hear the crowd's roar, to feel its waves rocking to a rhythm inside the loud thumping in your chest.

While players are trained to dull their emotions and play the "it’s just another game" card, fans turn up the hysteria dial.

It is, after all, a situation rife with stirring emotional conflicts(!!). Chief among them is the pressing question of what happens when both your flavor of the month and your main squeeze's worlds collide. Does loyalty err on the side of an organization with which fans have toasted a celebratory bottle of Gatorade after having endured decades of drought and famine? Or does it sneak into the luggage of the players who have chiseled its collective identity and restored pride in a starved fan base?

Last week, the Celtics traveled to Brooklyn for a pre-season matchup. As the players took the court, I felt momentarily panicked. With KG and Jason Terry out, we got to peel back our eyelids and process the uncomfortably unfamiliar scene with a laser focus burning our retinas. There stood Pierce, draped in black, cast in what could have been mistaken for a funeral rite. I kept on waiting for the saturation filter that had drained his jersey of the kelly green hue to be lifted, but all I saw was a scrub-studded Celtics starting lineup with an overmatched Jeff Green guarding Pierce (who, on this given day, seemed intent on taking it easy and sparing onlooking Celtics fans the anguish from having to relive his greatness).

Every vignette on the jumbotron was a loaded signifier; gaudy historical statistics flashed on the screen reminding us of all that Paul Pierce had left behind. From up above, the New York lottery sponsor logo kept on mercilessly jeering at me, intimating that frenetically ricocheting balls will most likely determine the Celtics future at season's end. This was some Freaky Friday mind-bending role reversal crap and I wasn't enjoying it.

And then the sloppy "you miss a shot, I'll miss a shot" series of possessions all came to a head. With seconds left in the second quarter, Pierce assumed a familiar position at the top of the key, pounded the rock a few times before slowly starting off for the basket. Before you knew it, he had negotiated a path to the rim for one of his signature butchery smooth layups: his first FG of the evening. (On Thursday, against the Timberwolves, that end-of-quarter play was replaced by a post clear out move for Humphries. We're talking about Mr. Hot Guy & Baby Animals, prancing around in a cashmere cardigan, Humphries. The man is practically the human embodiment of everything the Celtics stood in opposition of for the past six years -- right down to his knack for nabbing offensive rebounds.)

Most of the rest of the game was elevator music to a conversation about the nonsensicalness behind the argument that a total bottoming out is a necessary pre-condition to "rebuilding". In the waning minutes of the fourth quarter, however, the game seemed intent on settling any lingering uncertainty about what side -- KG, Pierce & Co. or the listless Celtics -- would prevail in winning my heart. With the Celtics in a position to take the game from the Nets, I improbably found myself pulling for Courtney "Almost" Lee and the ever dependable Jordan Crawford. Game over.

What keeps us trudging along (when all we can see on the horizon are bloody, gruesome bludgeonings) are the clutches of unconditional love colored with a tinge of Stockholm Syndrome. It’s not the most poetic sentiment, but you can always count on psychopathologies to bend reality and keep rationality at bay.

Which is to say that the heart wants what it wants. For now, that means juggling a sometimes perilous polyamorous NBA affair. There are bound to be awkward moments -- like aborting a fist pump for the visiting team -- but there are no executional kinks that an 82-game regular season can't smooth out. Plus, an asterisk beside whatever milestone KG and Pierce nudge forward in a Brooklyn uniform (robbing the records of a "BOS") sure as hell beats out an impotent team holding KG and Pierce hostage and ultimately bowing out before even getting to stare the mighty Heat in the eye.