1. What Significant Moves were made during the off-season?

Let me see, where do I begin? The Nets made a blockbuster trade with the Boston Celtics that sent Wallace, Brooks, Humphries, Bogans and draft picks to Boston in exchange for Garnett, Pierce and Terry. Talk about a total transformation. 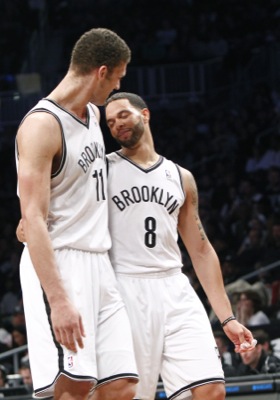 In this deal the Nets got to future Hall of Famers (and former NBA Champions, well, three of them, actually) and one of the top bench players in Terry, who, sure, has seen better days but still provides much of what the Nets are looking for -- depth and leadership off the bench.

They also got the biggest prize of the offseason, according to some, in Kirilenko at a highly discounted rate of $3.2 million for this season and a player option at $3.3 million for next. This after Kirilenko put in a highly productive season with the Minnesota Timberwolves in which he made north of $10 million. What AK-47 provides is a defensive stopper who can play multiple positions, providing lineup flexibility.

Along with the "Big 4" additions of the offseason the Nets added a shooter in Anderson, a backup point guard in Livingston and a young, athletic rookie big man in Plumlee.

Oh, and how could I forget the addition of Jason Kidd as the team's head coach? He brings a fresh perspective as one of the game's all-time great point guards and a future Hall of Famer in his own right.

2. What are the team's biggest strengths?

Leadership would have to be the biggest strength at this point with Garnett, Pierce, Terry and veterans like Joe Johnson and Deron Williams on the roster. Kidd and his staff, led by Lawrence Frank, also give the Nets another level of leadership. Sure, Kidd doesn't have the coaching resume to quite call him a "leader," but as a player he was the embodiment of a leader, and Frank has been around the league long enough to carry weight.

Another major strength for this team is the number of usable bigs they have. With Garnett, All-Star Brook Lopez, Plumlee, Kirilenko, Reggie Evans and Andray Blatche they can come at you with different looks at the '4' and the '5.' Lopez and Blatche give the Nets low-post scorers; KG provides toughness and defense; Evans is your go-to rebounder; Plumlee is the athlete; Kirilenko can run the open court and acts as the defensive stopper for athletic 4s.

More: All of SB Nation's NBA previews to date

3. What are the team's biggest weaknesses?

The biggest weakness might be athleticism; uptempo pace, more exactly. Sure, we'd all love to see this team run more, but when Williams gets out in the open court, who's coming with him? Pierce, Garnett, Johnson and Lopez are better suited in the half-court set. Not that they can't "run," but they aren't best utilized in a north-south track-meet style of play. Off the bench you have a few guys who can get out and run -- Livingston, Tyshawn Taylor, AK-47... -- but this team won't be known for its Pace. When you think of matching up against some of the quicker teams in the league this might cause a bit of a matchup problem, but it will be up to the Nets to really dictate the pace to their liking.

4. What are the goals for this team?

Goals? To win the NBA Championship. Or, at the very least, I think fans want to see an appearance in the Finals. They didn't go "all in" and trade away draft picks for Hall of Fame veterans to be OK with a second-round exit in the playoffs. This team has lofty -- and some definitely think attainable -- goals for this season.

5. How long of an adjustment period will this team need?

Great question! (Note: we were asked to come up with the fifth question...) With a brand new coach -- a rookie coach, at that -- and such a high turnover from last year's roster, the Nets are likely going to need a period to adjust to playing alongside each other and letting Kidd get his feet wet. But the question remains; how long will that adjustment period take?

It would not surprise me to see them run into some rough waters over the first two months of the season. Yes, two months. I'm not saying they'll got 10-20 over that span, but If they went 17-13 to start the season would it really surprise you? It wouldn't surprise me.

I do think they'll find their stride after about 30 games into the season and work their way into a Top 3 seed in the East, which would be ideal. If we're expecting the Miami Heat to take the top spot in the East, which I think a good number of people are, if they can get into the 2nd or 3rd seed they'll be able to avoid Miami until the Eastern Conference Finals.

Here I am going on and speculating about where this team will finish, but my main point is that we probably will see the team have some early struggles -- as Miami with their 'Big 3' early on in 2010 starting 9-8 and the Lakers did all of last year -- but they'll right it. It's just going to be a matter of remaining patient and keeping an eye on the prize, which isn't winning 60 games; it's winning the NBA Championship.