It took a little longer than expected, but the Nets pulled out a victory in a wild game tonight in D.C.

Walking off the court in Oklahoma City after their dominant performance Wednesday night, it's doubtful many Nets were worrying about tonight's visit to the nation's capital to face the 4-26 Washington Wizards.

And after three quarters tonight, having cut a 12 point lead to just one, the Nets surely believed they would eventually outlast the hapless Wizards.

Then, after Brook Lopez slammed down a Gerald Wallace miss with 3.2 seconds left in regulation, Brooklyn's boys had to think they had escaped with a hard fought - but inevitable - victory.

And when the Wizards took a 101-93 lead with 1:23 remaining in the first overtime, maybe there was a raised eyebrow of concern on behalf of the road team, but that's about it.

Even after Bradley Beal hit a gut-wrenching buzzer beater to send the game into a second extra frame, perhaps some Nets stole a glance at Nene on the Wizards bench - disqualified and unable to help his teammates - and felt pretty good about their chances.

And then after Beal calmly tied the game with two free throws with 9.1 seconds left in double OT, it was almost certainly seen as an opportunity to hit a last second shot to win the game.

So when Joe Johnson raised up over Beal and a late-arriving Martell Webster and let a shot go that nestled softly into the twine, all of that optimism proved justified - the subsequent off-target, last second heave by a fading Jordan Crawford merely a fait accompli. The Nets were winners, just as it was supposed to be.

"Every time I caught the ball in these two overtimes, man, they were bringing the double team - quick", Said Johnson. "I saw the double coming, and I just tried to take a hard dribble to get a shot up."

The Nets were led by Brook Lopez with 27 points and 13 rebounds. Deron Williams had 24 points and 10 assists. Johnson chipped in 18, including his game-winner. Andray Blatche, who attracted a lot of Wizards fan ire, had a double-double off the bench, with 13 points and 12 rebounds, often playing in tandem with Lopez. Keith Bogans had no points, no assists and 5 rebounds in almost 30 minutes during regulation - but he hit a crucial three-pointer from a Wallace inbounds pass to cut the Wizards' lead from 7 to 4 with 1:14 left in the first OT.

For the Wizards, Nene was hot early and led them to a 12 point first quarter lead. His last second effort in the lane sent the game to overtime. He finished with 20 points on 8-12 shooting before fouling out. Bradley Beal had a terrific game, scoring 24 points and starring in both OTs with his clutch shooting. Jordan Crawford added 23 off the bench, going 9-13 from the floor and 4-5 from three (his only miss the off-balance fling at the end of the game).

As for Johnson's heroics, Coach P.J. Carlesimo summed it up - "That's why we got him and that's what he does. That's what big-time players do."

"They got the confidence to put the ball in my hands down the stretch," added Johnson "and I just try to come through."

And come through he did.

- Blatche had his double-double in under 20 minutes playing extended minutes at PF next to Brook Lopez. Carlesimo paired the two for the first time all season in Wednesday's game against the Thunder (when starter Kris Humphries was healthy and available) and followed up with more of that combination tonight. Carlesimo has referred many times in the last week to his belief that the rotations are still a work in progress and this looks like an indication of his thinking behind those comments.

- Wizards coach Randy Wittman went berserk after an apparent tip in by Webster that would have tied the game at 91 with 2:41 to go in regulation was called goaltending and disallowed. Assistants Sam Cassell and Don Newman had to physically restrain Wittman during the next stoppage in play as he furiously stormed towards referee Tre Maddox. Senior official Joey Crawford stepped in to cool things down. Wittman was still jawing animatedly at Maddox several minutes later. No technical foul was given.

- The stat of the night was provided by the YES Network. During the "Ask the Announcers" segment, a fan asked what the records were with the varying (excellent, BTW) announcing crews this season. So here they are! 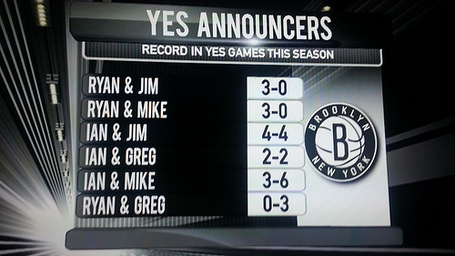